Over the weekend not only did the NHL return to action, but so did the AHL, ECHL and most of the NCAA. After the jump I highlight some of the action from over the weekend. 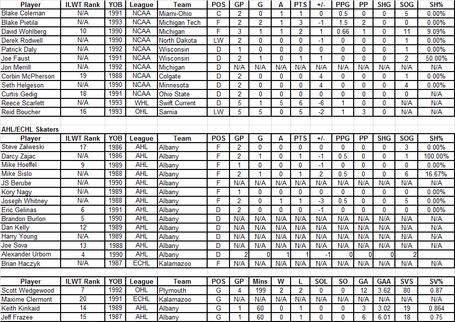 Despite a strong preseason Albany began the 2011-12 season where it left off, beginning the year with back-to-back losses. Keith Kinkaid and Jeff Frazee split the goaltending duties with Kinkaid faring a bit better (at least statistically) in his start.  Forward Mike Sislo is generating some decent offensive opportunities for Albany, scoring on a penalty shot in Sunday's game and posting 6 shots over the weekend.

It was notable that Brandon Burlon, Harry Young, Joe Sova, JS Berube and Dan Kelly were scratched from both games over the weekend. It is unclear if any of those players are injured.  Also important to note was that Vladimir Zharkov was -4 for the first two games with Albany.

The Devils announced late last week that they now had a development agreement with the Kalamazoo Wings of the ECHL.  Currently only goaltender Maxime Clermont and forward Brian Haczyk have been assigned there, but I would expect a defenseman or two might end up there before the year is complete.  With injuries likely at the NHL/AHL level Clermont will likely shuffle between Kalamazoo and Albany this season.  Haczyk who signed an AHL deal over the summer, will likely remain with the Wings until injuries hit Albany.

In ECAC action Colgate defenseman Corbin McPherson (who was named one of the three team captains for this year) was the Tournament MVP as Colgate went down to Nebraska and won the Mutual of Omaha Stampede tournament. McPherson registered a plus 4 rating in the tournament's two games. Impressive that he was named tournament MVP without registering a goal or assist.

In other college action three members of the 2011 Devils draft class (Blake Coleman, Blake Pietila and Patrick Daly) made their college debut over the weekend. Pietila made the biggest splash with a 2 goal/3 point effort in Friday night's game. Coleman notched his first point of the year for the RedHawks and Daly played in one of the two Wisconsin weekend games.

Jon Merril has served about a quarter of his suspension and is still on track to re-join the Michigan Wolverines November 12th vs the Miami of Ohio RedHawks.  Senior Devils prospect David Wohlberg tallied a goal, assist and 11 shots in two Michigan wins over the weekend.

In the CHL, Reid Boucher had a hat-trick on Saturday night in a 4-3 Sarnia win over the Kitchener Rangers.  Boucher now has 5 goals in 5 games for the Sting, 3 of those goals coming on the power play.  Reece Scarlett is logging a lot of ice-time and accumulating a lot of points on the Swift Current Broncos.  Unfortunately, the team isn't all that good, which is why you shouldn't read too much into his early season plus/minus rating of -6.  Scott Wedgewood has stuggled a bit to start the season, and has a very capable backup in Matt Mahalak, who was a 6th round draft pick of the Hurricanes in 2011.