Share All sharing options for: Devils Scoring Chance Summary for Game 1 and Game 2

Welcome to the first scoring chance post of the year. Before I get into anything I want to suggest checking out my intro to scoring chances post right here.  It should help you in understanding everything that you will see below.  Also I should note that I am kind of stingy when it comes to chances. I used a pretty hard line when it came to the scoring area, so even if a shot was slightly out I still didn't count it.

Despite losing in their first game of the year the Devils actually did a pretty good job of limiting the Flyers scoring chances.  They led 9-6 in chances after two periods but then fell apart in the third getting out chanced 6-0.  Ilya Kovalchuk had a poor night going -4 at even strength and also giving up 2 chances while on the PP.  Adam Larsson led the way for the defensemen going +3 at even strength and Petr Sykora managed to finish the night at +5.

Patrik Elias led the team with 3 scoring chances but only managed to get one on net.  Zach Parise had 2 chances on net and Kovalchuk led the team with 2 chance assists.  Continue after the jump for all the tables and graphs.

This is the head to head chart for the game.  This shows the even strength head to head comparisons for each player.  It shows how the Elias' line was pretty successful against basically the whole Flyer lineup, while the Zubrus' line was pretty horrible. Boxes without a number means that that player didn't have chance for or against, boxes with a zero means that they ended up even. 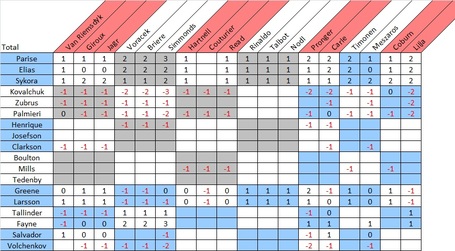 The Devils 2nd game was very similar chance wise after 2 periods compared to game 1.  They were tied with Carolina with 8 chances apiece heading into the 3rd but this time the Devils had a strong 3rd, out chancing the Hurricanes 4-1.  Ilya Kovalchuk made up for his lackluster opening night leading the forwards with a +3 at even strength.  He also led the team in chances and chances on goal.  The Elias line was a little less successful this game only managing 1 ES chance but it resulted in the Devils first goal of the year.

Larsson had another good game leading the defensmen with a +3 and had 2 chance assists. Mark Fayne also had a strong night with a +3 and got a chance on goal. 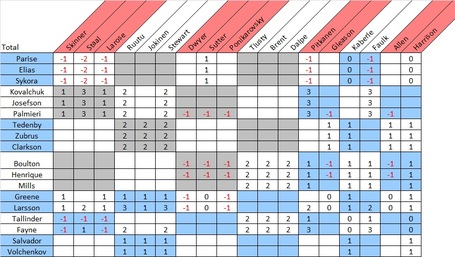