Share All sharing options for: The New Jersey Devils Record Within Atlantic Division Since the 1998-99 Season

One of the questions David Sarch and I had for E.J. Hradek in our interview with him was about the New Jersey Devils' performance within the Atlantic Division. We wanted to know whether he thinks the Devils will improve there. We asked it because the Devils were 11-12-1 within the Atlantic last season. It certainly didn't help New Jersey's cause to making the playoffs last season; and so we certainly hope they do better against their divisional rivals. Given that it looks to be a difficult division again, we wanted an outside opinion.

Hradek thinks they will if only because the team will probably perform better than they did last season. By not falling on their face in the first half of the season, the Devils will look to improve in all respects. Hradek also explained why those games were very important. Sure, they're rival teams, but success over them not only earns the Devils points, but it takes points away from them. The way the NHL sets up their schedules, teams will play more games against teams in their division than against teams outside of them.

I agree with Hradek's opinion that the Devils will improve just by not doing so poorly to start the season. I agree even more with his main point that inter-division games are worth that much more. Since the top eight teams within the conference makes the playoffs, getting ahead of the "local" competition is big deal. Struggling within the division means that a playoff hope rests on destroying non-divisional opponents; and that's tricky since there is a wider variety of teams and they're spread out through the schedule. The inter-division games are key.

To that extent, I decided to look at how the Devils performed within the Atlantic Division in prior seasons. I didn't just look at the team's divisional record, thanks to Hockey Reference, I was able to find out how they did against each Atlantic Division team in those seasons. I went all the way back to the 1998-99 season, when the NHL first aligned the five-team divisions that are in place today. Please continue after the jump to find how well the Devils did and who they beat on from season to season. 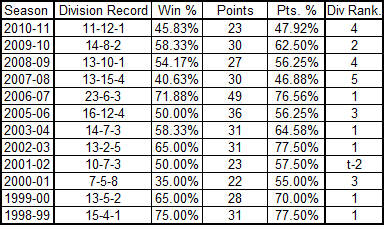 Believe it or not, but last season's team did not post up the worst divisional record since the five-team division was introduced. In terms of both winning percentage (wins over total games) and point percentage (points earned over all possible points), the 2007-08 team did worse than the 2010-11 team. Since that team earned 99 points and finished second in the division by the end of that season (oh, and made the playoffs), it's an example of how a poor divisional record doesn't necessarily doom a team. Of course, what I said prior to the jump holds true. The Devils busted up their non-divisional games to make up the difference; they went 26-11-3 in the East and 7-3-0 against the West. That all said, note that the 07-08 team had played more games within the Atlantic Division than the 10-11 team. From 2005-06 to 2007-08, teams played against teams in their division eight times instead of the current six. With that in mind, the 07-08 team possibly were not much worse than 10-11 when you take games played in account.

In terms of success, there's plenty of it. Right at the top are the 2006-07 Devils. The 32 inter-division games worked in their favor as they beat on their local rivals early and often. They simply crushed it in the Atlantic Division with a 23-6-3 record. They were also quite strong in 1998-99, 1999-2000, 2002-03, and 2003-04. They didn't play as many inter-division games as they did in 06-07, so the amount of points earned doesn't look as impressive. However, the percentage of points earned along with the winning percentage says it all.

Notice the rank of how the Devils' record stacked up in the division. Not finishing high within the Atlantic is a recent phenomenon. Prior to the lockout, the Devils were fantastic. That shouldn't be a surprise since they were a fantastic regular season team for several of those seasons. After the lockout, things have went awry to a point. Sure, they did well in 2009-10; but it's book-ended by lackluster divisional records. We can look back in the larger history of these 12 seasons and conclude that more often than not, the Devils will be fine within the division. Recent history, though, would suggest that the Devils could certainly struggle again. Let's hope it doesn't if only so they don't have to be significantly better outside of the division.

Let's go a little deeper into these Atlantic Division records. Who did the Devils beat up on the most? Who gave them the most trouble?

Look at all of these points. For the most part, the Devils have been able to achieve at least half of all available points against their individual Atlantic Division opponents for most of the last 12 seasons. They've only earned less than half in a couple of seasons with each opponent, a total of 9 times out of 48 combinations. I'd say that's pretty good. In fact, out of the potential 146 points earned against each team over the last 12 seasons, the Devils earned at least 60% of the points available. The range in points earned isn't that large across each team. The Devils earned 94 against the Pittsburgh Penguins, 90 against the New York Rangers, 89 against the Philadelphia Flyers, and 88 against the New York Islanders. I guess the Islanders do have the Devils' number, though it's a small one.

The results are a bit different between the time before and after the 2005 lockout, however. Before 2005, the Devils only put up a sub-.500 record against a divisional opponent three times. It's happened six times since then. The Devils were always at least .500 against the Rangers and Islanders between 1998 and 2004. After the lockout, the Devils are .500 against Our Hated Rivals (42 points out of 84) and only .578 against the Isles (48 points) since 2005. This tells me the Rangers really have the Devils' number in more recent seasons, more so than the other three Atlantic Division opponents. They've been better against the two Pennsylvania teams, but that's boosted by some incredible records (sweeping the Pens in 2009-10, coming really close to a sweep of the Flyers in 2006-07) balancing out some off years (last season against the Pens, the Flyers in 2009-10). It's not all bad since then, it's just not as good as it was from 1998-04.

Missteps aside, why have the Devils been so good against their divisional opponents for much of the last 12 seasons? I can't really give a definitive answer to that outside of the notion that the Devils are at least a pretty good team. While inter-division games are the most common place, it's still a small population size from season to season. Even 8 games may not be definitive, especially when you consider they're spread out throughout the season. The Devils could have been lucky to catch their opponents on some bad nights; as much as they could have been just that much better than their opponents. It's worth noting that the only time the Devils missed the playoffs in these last 12 seasons was last season, whereas the other four Atlantic Division teams had more substantial falls and recovery periods over the same length of time. However, I don't think it really explains all of the good or bad results.

That being said, the Devils have been quite solid within the Atlantic Division with the exception of the last few seasons. I agree with E.J. Hradek in that these games are important; and it's always good to take points away from rivals. I certainly hope they will do better within the Atlantic this season. However, while the 2010-11 inter-division record wasn't good, it wasn't so terrible either. It certainly didn't help the Devils cause, but I'm not so sure that alone doomed them to miss the postseason. Looking back, their record against the Atlantic plus the 7-12-1 against the Northeast did more to drag them down.