In mid-December, I put up a shot breakdown by location showing where the Devils shot the puck on goal on the ice. I broke it up into zones and compared the Devils and the opposition after the first 28 games. With a record of 8-18-2 at the time, no one was surprised with the bad numbers. John MacLean was fired not too long after, and Jacques Lemaire took to the bench. Jamie Langenbrunner was traded to Dallas a few games later and then things started to come together for the Devils.

January was easily the best month for the Devils so far this season. It did see a rise in shooting percentage shown by John here. This post did create a little debate starting with elesias' comment on if coaches improve how a team shoots or not. So this should help answer some questions.

I actually called the post in December a shot quality breakdown, but I've come to a conclusion that that's not really the case; it's just shot location. Shot quality does involve shot location, along with a number of other things (shot type, location on net to name a couple). Shot location does answer some questions though. The most important is obvious - Where are they shooting from? How have they done from the point, at sharp angles, or by the net? Since their shooting percentages have gotten better, where have their numbers improved? Has there been a big difference in MacLean and Lemaire in terms of shot location; or has the team just been getting better at being at the right place at the right time? Please continue after the jump.

I've created an image to illustrate the zones. The image below is a bird's eye view of half a rink where each zone is. All 10 zones are between the crease line and the blue line. Each zone is color coded. Any shot taken behind the net, in the neutral zone or further is colored black and is considered Outside ("Out" for short). Note: any goals scored beyond the blue line were empty netters - UPDATE -  or lame dump in goals.

All but four of the zones are mirrored of each other because of the symmetry of the ice. You can see the net, the circles, and the trapezoid to get a sense of orientation. There are also four tiers of distance. Zone 1 is everything around the net  and between the circles. The next tier contains zones 2, 3, and 4, making up the slot between the circles and about half of the face-off circles. Zones 5, 6, 7, and 8 are along the boards towards the outside and slightly above the face-off circles. Zones 9 and 10 are shots along the blue line. I tried my best to correlate some of the zones and this image Gabe Desjardins created at PuckProspectus way back in 2009. 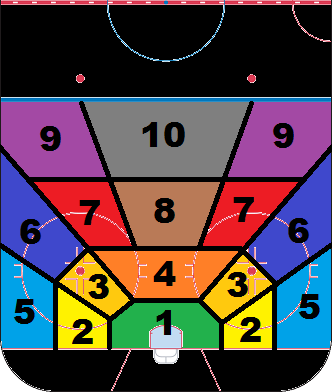 Here is the zone breakdown for the Devils on offense and defense for the season. I used ESPN.com's Gamecast, like this one against the Red Wings, and if things got a little tricky (or if the shot totals didn't add up), I compared it to nhl.com's Icetracker (example). This is just shots on goal, mind you. 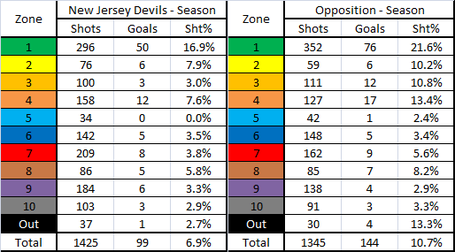 Notice the comparisons of zone 1 and the second tier between the Devils and the opposition. The Devils have more shots in the second tier than zone 1 whereas with the opposition it's the other way around. The opposition has only taken 19 more shots than the Devils in zones 1 through 4, yet they have scored 40 more goals. The Devils just haven't been able to get shots on goals as close to the net as much as the other teams do, and on top of that they haven't been able to capitalize around the net as much as their opponent.

By the way, if someone takes a shot from zone 5, you're only helping that goalies save percentage. The Devils actually take more shots out of the zone passed the blue line than they do here. The "the Devils take bad angle shots" excuse doesn't really exists. That one goal against in zone 5 was a Drew Stafford goal on Johan Hedberg against Buffalo on October 23 from the far hash-marks. Ugh.

In areas where the net is biggest, that is in good angle zones, the Devils continue to suffer. In zones 1, 4, 8, and 10, the Devils shoot 10.8% (70 goals on 643 shots). On the other side of the ice, opponents shoots 15.7% (103 on 655). Is this the result of great screening, or great shot quality (shot type, location on net) by the other teams? Is it just outstanding goaltending, poor quality, or just bad luck when the Devils shoot this year?

How have the Devils done since the coaching change? Here is the Devils offensive location breakdown between the two coaches: 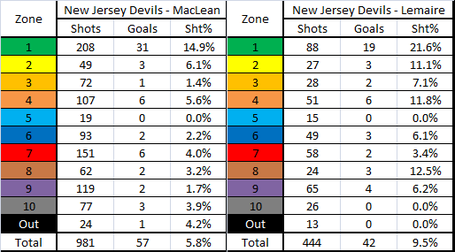 Well the raw numbers certainly look nice. There's no doubt that under Lemaire, the Devils have shot better. They have a better shooting percentage in every zone except zone 10 (and outside the offensive zone). In zone 1, the Devils under Lemaire have been shooting at the same rate that their opposition has been shooting all season at 21.6%. In good angle zones, Lemaire's Devils have shot very well (again save zone 10). In zones 1, 4, and 8, they have shot better than 11% in each area. The big question is this though - Is this just because the team is finally regressing to the mean or has Lemaire really made a difference on offense?

Since MacLean has coached just around double of how many games Lemaire has coached, the only column to look at above is percentages. Here's a look at the per game stats: 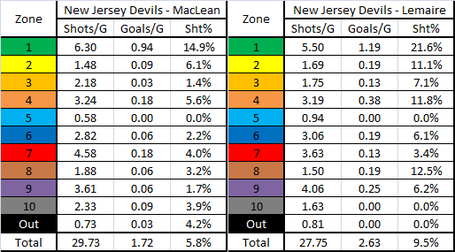 A good thing this image shows is the shots per game and goals per game for each coaches. Under MacLean, the Devils were averaging a hair under 2 more shots per game. That shouldn't be a surprise since MacLean's Devils were always down by a significant amount and the opposition sat back. Lemaire's Devils see almost a goal per game difference. Is it by because where each "team" shoots?

In short, it seems both "teams" are shooting in the same places at the same rate per game. The difference is only in scoring - and the Devils shooting percentages under Lemaire trump Mac's - plain and simple.

How about how other teams shoot against the two coaches? How have the defenses been? I'm just going to show the per game stats: 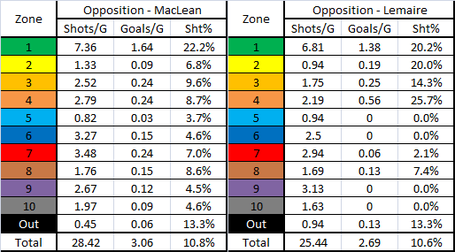 MacLean's Devils saw the opposition take 3 more shots per game than Leamire's Devils. That 3 goals against per game is an eye sore, yet Lemaire's isn't anything to laud about either. The Devils under Lemaire have scored 42 goals and have given up 43. I tell you the one thing that surprised me:  the very close total shooting percentages between both coaches. Yet going through each zone, you can see the difference.

If your the opposition, and you get the puck close to the net, there's a good chance you're going to score against the current Devils. Zone 4 is actually the best area, shooting almost 26%. The Devils under Lemaire (and Martin Brodeur and Johan Hedberg) have kept control of the opposition when the puck is further away. Lemaire has been able to decrease shots in zones 1 through 4 from 14 to 11.7 per game. Goals do rise slightly in the same area. In fact, there are only two zones where Lemaire's defense gives up more shots per game than MacLean's defense:  zone 5 and zone 9. That's perfectly acceptable. Give them zone 5 and long distance shots all day.

For this season, the Devils shot location still isn't very good. Their percentages in each zone are just brutal. Compared to their opposition, hey only have a better percentages in zone 9, far away from the net. Though they Devils do out-shoot their opponents, the areas they out-shoot them is also far away from the net. This won't help their overall percentage. They need to find opportunities closer to the net. Some recent games with good examples are against the Islanders on January 17 and against Florida on January 23.

On defense, it's very simple. Keep the other team to the outside and along the blue line. A great example was against the Penguins on January 20. Lemaire and the Devils have done a very good job changing that aspect of the game compared to how MacLean coached the team. The Devils have been back checking very well, including Ilya Kovalchuk who's learning to play two-way hockey like Charlie Conway in D3. They have been squaring up with their men, and keeping them further away from the net. Granted, when the opposition does get near the net, it's a good change they will score, y when the team does shoot from far away, it's low percentage, the way it should be.

Though under Lemaire, the offensive numbers haven't changed other than the shooting percentages. Shot location hasn't really changed. The team under MacLean did have a better shot per game average, but it seems the puck was not going their way when they shot. Under Lemaire, the team has been in the right place at the right time. Call it regression to the mean.

So what's your take on all this? Again, this is just shot location, which is just one aspect of shot quality (maybe one day I will get around to comparing the type of shot as well, i.e. going through almost 2700 shots - so maybe not). Do you see something different from the numbers that I didn't mention. What differences have you seen in terms of shot location between both coaches? Let us know in the comments.