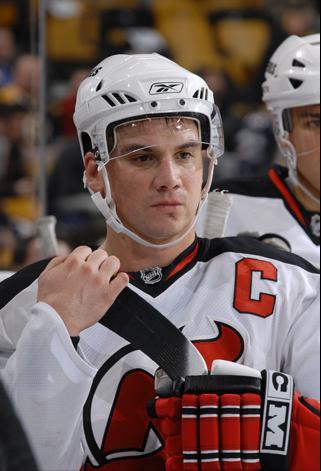 Something I've been pondering lately. Ultimately I don't think it was either of them alone that sunk the 2010-2011 Devils (salary cap issues, injuries, distractions due to Kovy's contract, etc, etc) but I think one played the straw that broke the camel's back.

I find it a little too neat and coincidental that the teams sudden "turnaround" (not sure if 7 games fully constitute a turnaround) time perfectly to Langenbrunner getting shipped out. If you remember, when Lemaire took over the team from MacLean they pretty much continued playing just as lousy as ever. Now of course it's fair to expect some time before a new coach can implement a new system and see results. That said, we've all seen plenty of coaching changes in the NHL that seem to immediately revitalize teams (Bylsma in 2008-2009 for example) if even just for a short-while right away. This one didn't.. not even in the slightest really until *poof* Langenbrunner was gone.

While coincidental, and I doubt we'll ever know the real story of what went on, to me all signs point to the NJ lockeroom being an absolute mess and the atmosphere there was just ripe to breed losing and underachieving in such a way that no coaching could necessarily overcome. That doesn't mean the players didn't like Langenbrunner, but even if they did that doesn't mean his presence, energy and possibly conflicts elsewhere weren't effecting their mood and attitude as their leader. Being liked or not, doesn't mean he had a positive effect on the team.

Now on the flipside, I had no clue what MacLean was doing in those first 30+ games really. The team played with absolutely no system in place..or at least none that was recognizable. They just kind of hovered on the ice firing pucks in the general direction of the net. Kind of like the "Mites on Ice" during 2nd period intermissions.

That clearly hasn't been the case recently as they are actually playing like a team. The defense is starting to play well in their own zone and stepping up to join the offensive rush. Coupled with some pretty effective and aggressive fore-checking from the offense it's really re-energized the team and probably even Marty.

Also it appears that someone finally figured out the best way to use Kovalchuk on 5-on-5. Chico Resch has made this comment a few times over the past couple of games and it's absolutely true... letting Kovalchuk play second string on an offensive rush has left him in an ideal position to rip in shots off of rebounds or when the initial play breaks down. He's just there swooping between the circle ready to fire his cannon at an unsuspecting goalie and defense.

Now obviously the combination of getting rid of Langenbrunner and replacing MacLean has lead to this "turnaround" (again I feel it's too soon to use that word). So don't swoop in here and act all bright and say "It was a combination of both!" That's kind of a given. My point is which one was having a more detrimental effect on the team and it's play?

Had Lemaire started the season behind the bench would he be having the same results he is now if Langenbrunner stayed with the team and remained captain? They weren't doing so hot at the end of last season which I'm sure you all don't need reminding about. Or had Langenbrunner been shipped out in the offseason, could MacLean have been able to...I don't know... do something, anything with the team resembling coaching?