It's that time of the week so after the jump, find statistical updates on Devils prospects from the NCAA, Canadian Juniors, Albany and Trenton.

Jon Merrill was the CCHA rookie of the week after tallying 2 goals over the weelend vs. the Alaska Nanooks. Teammate Brandon Burlon added an assist to keep pace with Merrill for the team lead in scoring by a defenseman.   The Star Tribune has a stretch run assessment of the Minnesota Golden Gophers that mention Mike Hoffel and Seth Helgeson.

Although not technically a Devil, University of North Dakota defenseman Chay Genoway (UFA)in his senior season now has 6 goals and 19 assists in 27 games. I will probably utilize a few more posts in the next few months in my campaign to have the Devils sign him. Be warned 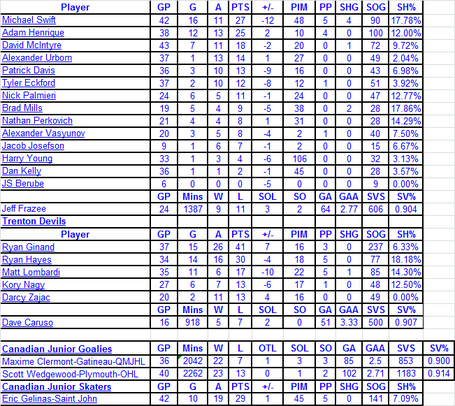 After an impressive 4 game winning streak the Albany Devils crashed back down to earth with three straight losses by the scores of 3-0, 8-3, and 6-2. have dropped to a tie for 14th in the Eastern Conference.  Their current record is 17-23-0-3. To make matters worse both Jeff Frazee (knee surgery) and Tyler Eckford (personal) are out for indefinite periods of time. Dave Caruso has been recalled from Trenton of the ECHL to back up Mike McKenna for the immediate future. Jeff Lerg (former Michigan State University standout) has returned from injury to take Caruso's spot at Trenton.  Since his return to Trenton two weeks ago Darcy Zajac has fared well scoring 1 goal and 5 assists in 7 games.   The Trenton Devils of the ECHL currently are tied for last place in the Eastern Conference (11th overall) with a 14-21-1-3 record.

The above is a reader request from Triumph44. Since a top 10 (I still think top 3) is highly likely I will provide stat updates for the top ranked prospects as well. If there is a prospect you think deserves to be tracked please let me know in the comments below and I can add them to the list.
Thanks for reading and sound off below!