Another week, another 2011 prospect listing.  On Monday Bob McKenzie of TSN posted his top 65 draft prospects.  He surveys 10 different NHL team scouts to generate his list so this might be a more realistic list than the Central Scouting Rankings.  While all of the same names are near the top  they are moved around somewhat from where they had been.  Tops on the list?  Adam Larsson.    Take a look through the rankings and feel free to discuss them and the players below.

Before that, be sure to check out the statistical progress of some players who are already property of the Devils after the jump.

It was a good weekend for Michigan who swept Ferris State.   David Wholberg scored 2 goals on Saturday night taking his total to 11 and Brandon Burlon added his 5th to tie Jon Merrill (who has his teammates comparing him to Niclas Lindstrom) for the lead among Michigan defensemen.  Mike Hoeffel added his 9th goal in Minnesota's Friday night upset over North Dakota.  With John Ramage back with Wisconsin Joe Faust didn't suit up in either weekend game for the Badgers. 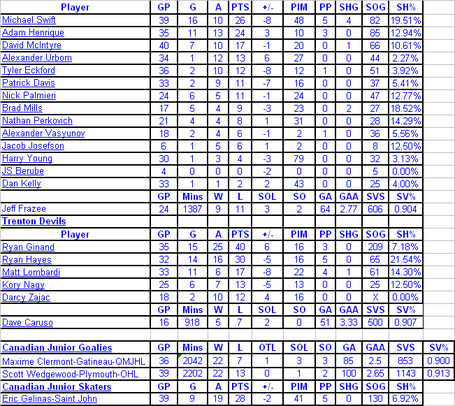 With 4 straight wins the Albany Devils of the AHL have moved  up to sixth place in the East Division.  With a 17-20-0-3 record they are ranked 13th in the conference but and if they are to continue this current winning streak they can quickly leap over Springfield, Bridgeport and Providence to pull within striking distance of Binghamton and Worcester.   You can read much more detailed update on the Albany Devils prospects here.  The Trenton Devils of the ECHL currently are tied for last place in the Eastern Conference (11th overall) with a 14-18-1-3 record.

In his 4 games for the Saint John Sea Dogs Eric Gelinas has 4 assists and is a plus 8.  Playing with a wealth of talent in Saint John(top ranked prospects Jonathan Huberdeau, Zach Philips, Tomas Jurco) his team is primed to make a deep run in the Q playoffs.

Look for a detailed post on Plymouth goalie Scott Wedgewood later this week.