The Langenbrunner Conditional Pick: Looking at Comparable Picks from 2005-2007

Share All sharing options for: The Langenbrunner Conditional Pick: Looking at Comparable Picks from 2005-2007

The move helped the Devils acquire an additional draft pick which was important since their 3rd round pick was forfeited and their 2nd rounder traded to Nashville.  It also allowed the Devils to clear about $1.4MM off of the payroll for the rest of this season.

Since I think it unlikely that Langenbrunner would be signed by Dallas after the draft  I wanted to focus on the implications of having access to the Dallas 3rd round pick vs. their 2nd round pick this year.  As I stated in my post on Monday, if the pick stays as a 3rd rounder the Devils would inherit a pick in the range of 75th overall through pick 82nd overall.   If the conditions are met and the Devils inherit a 2nd rounder it would be in the range of 53rd-60th overall.  How do I know the range of selections?

As per user Ubiquitous  I had the pick determination wrong.  With that being the case I have adjusted the tables that follow the jump.  As far as determining the actual pick ranges, let me be smart and grab the information straight from Wikipedia:

Whichever team wins the Stanley Cup is awarded the 30th and last pick, while the runner-up is given the 29th pick. The teams eliminated in the conference finals are awarded the 28th and 27th picks, with the 28th pick going to the team with the better regular season record. Remaining division winners, then wild card teams are ranked next, filling in the 26th through 15th picks. In both cases, better records result in later picks

I will be making two assumptions here.  (1) The Stars make the playoffs.  (2) They don't advance to the conference or Stanley Cup finals.

So how have teams been in selecting players in those specific spots?  Would a 2nd round pick be that much better than the 3rd rounder?  After the jump come to your own conclusion.

I only used 2005-2007 draft years for a few reasons.  I felt that looking at selections from 2008 -2010 was entirely too early and anything before 2005 was a draft year which had 9 rounds instead of the now standard 7.  First, I list the slots in the 3rd round the Devils would select from should the Stars not fulfill the conditions that would escalate the pick.  I color coded the excel sheet as follows:  Yellow-Current NHL Player (I didn't use a games played qualification here, just a guy feeling on their progression). Blue-Ranked by their team as a top 10 prospect (using HockeysFuture.com rankings) Tan-Ranked by their team as a top 20 (11-20) prospect. 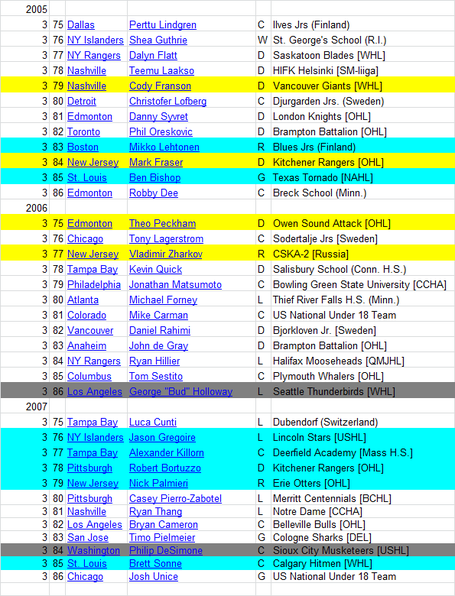 With three four players who are currently what I consider NHL players (perhaps I am being generous giving the NHL label to Zharkov and Fraser)  and seven players currently residing in the top of their respective teams prospect lists there is talent to be found picking this late in the 3rd round.  It is just harder to find. 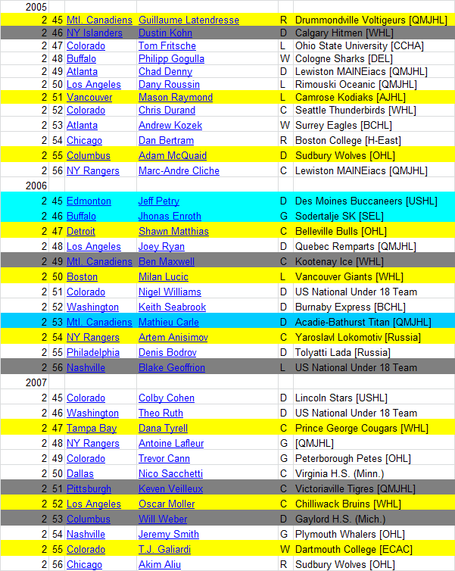 Picking in the 2nd round, talent might just find you.   With nine NHL players (average of three per year), one three top ten prospects and five top twenty prospects the chances of finding a player who will contribute at the NHL level certainly increases.

It might only be 15 or 30 picks but you can't help but notice the upside of acquiring the Dallas Stars 2nd round pick instead of the 3rd rounder.  This is why I was a bit disappointed that the pick received from Dallas was conditional and not just a straight 2nd round choice.  Lou Lamoriello speaking in a conference call about the trade said "it's basically a second round pick."

Let's hope he is right.

Of course having the selections doesn't mean anything unless you pick the right players. Something the Devils haven't been too good at in recent years.

And always remember that quality players can slip.   Look at 2005.  You don't see any great picks above right?  Well some of the 4th round picks in that year were Keith Yandle and Niklas Hjalmarsson.   Somehow they slipped through the cracks.

Thanks for reading and Let's Go Stars!  And by Let's Go Stars I mean:  Win your first round playoff series and promptly lose in the second round!