UPDATE: As promised here are the CSS rankings just published to NHL.com

Gabriel Landeskog is ahead of Sean Couturier on the NA Skaters list.

On defense Dougie Hamilton is ranked ahead of Ryan Murphy, which was surprising.

And the most interesting part was this quote by a scout on Adam Larsson:

"I think I would take Larsson over Hedman if I could, based on what I've seen the last three years."

The World Junior Championships in Buffalo didn't result in a gold medal for team USA, but it did give a stage to numerous high level prospects, including the Devils own Jon Merrill.  Here was a very thorough review of his play at the United States of Hockey blog.  The tournament also featured Swedish defenseman Adam Larsson and Canadian forward Sean Couturier.  They are both at the top of  most prospect rankings.

Speaking of prospect rankings, the Central Scouting Service mid-term rankings are due out today sometime (I thought it was noon) and I will update this post with a link when it becomes available.

In case you are curious the Devils conditional pick received from the Dallas Stars in last week's Jamie Langenbrunner trade will likely land in the 75th-80th overall spot if the pick stays a 3rd rounder.  If the pick becomes a 2nd round pick it will likely land 53rd-60th overall.

Prospect statistics after the jump.

After playing only a few regional holiday tournaments and exhibitions due to winter breaks and the World Junior Championship, college hockey started back on its regular weekend schedule this past weekend and will be back in full swing shortly.  With John Ramage playing for team USA in the World Junior's Joe Faust has landed himself in Wisconsin's last four games.  He still hasn't tallied a point yet, has put 1 shot on net with a plus 4 rating in the past 4 games. 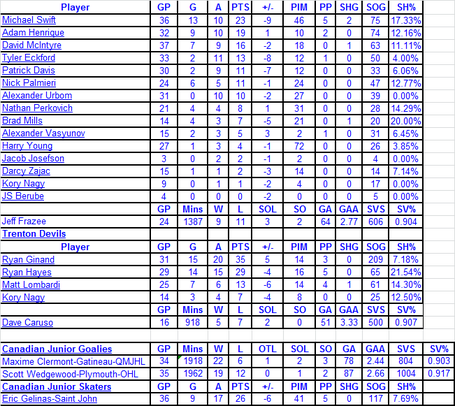 With only 1 win in their last 4 games, the Albany Devils of the AHL are next to last in the standings in the East Division.  With a 14-20-0-3 record they are ranked 14th in the conference but are only a 3 or 4 game winning streak away from being in the hunt for a playoff spot.   With the recent addition of Jacob Josefson (2 assists in 2 games since his return) and Adam Henrique's inspired play (16 points in his last 18 games) I am hopeful they can start to put together some wins.   The Trenton Devils of the ECHL currently are tied for last place in the Eastern Conference (11th overall) with a 13-16-0-3 record.

As I mentioned last week, Eric Gelinas has been traded in the QMJHL.  He went from Chicoutimi Sagueneens to the Saint John Sea Dogs who are tops in the QMJHL Maritimes Division with 68 points.  In his first game with the Sea Dogs, Gelinas had 2 assists, 4 hits and was a +4 in a 9-3 victory.

Look for a detailed post on Plymouth goalie Scott Wedgewood later this week along with an update on some of the Albany Devils action I have watched recently.