For most Devils' fans the Capgeek.com calculator page has been a regular visit this summer and for me at least, a daily visit since last Friday. With the Ilya Kovalchuk signing finally official now the real fun begins for a Devils era which I will tentatively name: The 2010 September Roster Purge.  As John Fischer has already pointed out, the Devils will need to clear roughly $2.96MM of cap dollars and probably an additional $1-2MM to get comfortably under the cap.

Since everyone -on this site and others- have put together their recommendations on what the Devils should do, I will take my shot to make the Roster Purge as painless as possible.  I think everyone will agree on the following point:  Bryce Salvador will likely not be on the Devils roster on October 6th.  Salvador was a good player for the Devils during his time in New Jersey but the defensive corps currently has a number of players who provide the same type of skills at a much cheaper price.  He also doesn't have a no-trade-clause (NTC) which means the Devils can actually trade him, unlike many others on the roster who have NTC in their contracts.

Whether it is by trade or waivers Salvador can fulfill a role on a team playing on the 2nd pairing, averaging about 16-18  minutes of time on ice per game and can contribute at least 2 minutes of that time on the penalty killing unit.  He won't add much offensively but at $2.9MM for the next two years his defensive skills would be attractive to either a veteran team intent on making a deep run in the playoffs or a young team looking to add a physical veteran presence to their roster as their young defensemen develop.  Simply put, while slightly overpaid in the current NHL market, he does still have value.

While the Devils have to move salary this year to get cap compliant they should and probably are thinking about next year's roster already.  Right now, in 2011-2012 there is currently $48,483,332 committed to 13 players, which leaves them roughly $11MM left in cap space.  Even removing Salvador's contract only helps out next year so much as a good portion of his $2.9MM salary would ideally be used to retain Andy Greene.  If he has a similar year to 2009-2010, I can see Greene having a yearly salary base of $2.5MM.   If that is true then the Devils would still have the same problem in 2011-2012.  Ten players to sign for about $11MM.  Did I mention they need to re-sign Zach Parise?

This leads me to my question to you, the reader.  Should the next casualty on the Roster Massacre list be Dainius Zubrus or Brian Rolston?  After the jump I will lay out the pros/cons of moving each.  Please note that I am writing this under the assumption that Rolston will NOT be waiving or asked to waive his NTC.

After Bryce Salvador the next likely targets to move off the roster are Dainius Zubrus and Brian Rolston.

Rolston  has a NTC, but can be moved utilizing waivers(although highly unlikely a team would take that salary on) or re-entry waivers.  As John noted in his primer on the salary cap problem re-entry waivers is not an ideal scenario. If Rolston was claimed on re-entry waivers there would be a dead cap hit of $2.5MM (in a re-entry waiver claim, half of Rolston's $5MM salary would be the responsibility of the Devils, the other half would be the responsibility of the team who claimed him.  If Rolston is claimed on regular waivers his entire salary would be assumed by the claiming team).  That is likely the only way to remove Rolston off of the roster via waivers.   But is it better to have a dead cap hit or have to trade someone like Alexander Urbom in order to move salary?  I would rather the dead cap hit.

Could Rolston be approached about waiving his no-trade-clause?  While I would be shocked if he was, I can't see the harm in bringing up the subject with his agent.  Granted if the Devils ask him to waive that clause it could affect future free agents who may feel that the Devils don't keep their word when issuing NTC.  That said, they wouldn't be the first team to do it and I would argue that the NTC was given to a player based upon a certain level of expected productivity.  If the player hasn't met that productivity asking him to waive his NTC shouldn't be viewed as the Devils not honoring NTCs that they issue.  That said, Tom Gulitti had a tweet yesterday that said that Rolston has still not been asked to waive his NTC.   Like I said, I am going to assume right now that the only way off of the Devils roster for Rolston would be re-entry waivers.  That would save $2.5MM on the cap this year and next year and also open up a roster spot.

Zubrus on the other hand can be freely traded to any team that is interested.   Additionally his $3.4MM cap hit, if given away in a trade would be totally removed from the cap for this year, 2011-2012 and the final year of his contract 2012-2013 (where the Devils are quickly burning up cap space with $30MM dedicated to 7 players).  He can also be put through waivers but likely wouldn't be claimed at the salary he currently makes.  There wouldn't be too much value in trying to put him through re-entry waivers either as the Devils would have a dead cap hit of $1.7MM for the next three years should he be claimed (and at that price I am sure he would be).  Zubrus would likely have to move via trade, and that would require parting with a valuable asset for a team to take his contract on.  This could be in the form of a prospect, draft pick or current roster player.

That is just the monetary portion of my thought process though.  The chart below shows that besides a short stretch towards the end of the season Zubrus was utilized more than Rolston on the ice both in even strength and power play situations after the acquisition of Ilya Kovalchuk. 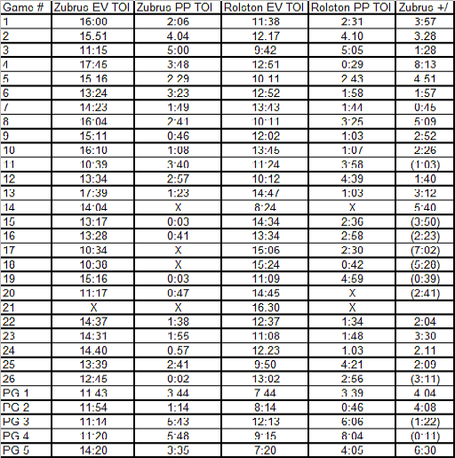 Zubrus posted 7 goals/9 assists +4 compared to Rolston's 4 goals/5 assists +1 in the 26 games after the acquisition of Kovalchuk.  Zubrus is also younger than Rolston, and can play on multiple lines.  So while it may be easier to move Zubrus, it may not be as easy to replace his production.

Before removing either of these players from the roster the Devils should consider the usage of each player on the power play under new coach John MacLean.   The acquisition of Jason Arnott might mean less time on the power play for Zubrus.  The Devils may also consider moving Kovalchuk off the point (which didn't work out that well last year) and that might require a larger role for Rolston on the power play.  Both from a monetary and on ice standpoint there are pros and cons to moving either player off of the roster. Let me lay those out in a table format:

Editor's note: The TOI above is a projection on the times each player would likely play in 2011-2012.  Also the goals to be replaced represent the goals each player had all of last year.

My choice of either Zubrus or Rolston would likely be based on what additional assets would have to be thrown in for a team to take Zubrus. I can stomach the cap hit of $2.5MM this year and next  for Rolston if the prospect/pick cost to trade Zubrus would result in a premium prospect or 1st round pick being moved.  I would qualify that even further: Looking at the top 20 list from Hockey's Future if any of the top 5 prospects are required to move Zubrus then I would try to move Rolston via re-entry waivers.   That said, if there is a deal that would take both Zubrus/Salvador in the same deal I would only keep Tedenby, Urbom and Josefson off the table (1st round picks would be available).

In the unlikely event that  a NTC waiver is issued by Rolston, I think I could deal with Tedenby going the other way in a deal to remove that contract from the books.  I love Tedenby's potential, but right now if the opportunity presented itself to move $5MM off the cap in one move, you have to give up something of value to make that happen.   Tedenby also is blocked by the left wing depth at the NHL level which makes him somewhat expendable.

Zubrus would probably be harder (but not impossible) to replace on the ice, but he is easier to move.  Rolston's production would be easier to replace but he has a NTC.   Since there is no guarantee that a team would even take Rolston on re-entry waivers, it would seem Zubrus would be the likely candidate to move.  That being said, my personal preference would be to try and expose Rolston first and see if anyone bites.   The Devils will likely not want to pay him $2.5MM a year for him not to play in New Jersey, but I would rather have the Devils pay that then give up a player or prospect plus Zubrus.

Now it's your turn.  Trade Zubrus with an additional asset or attempt waivers/re-entry waivers with Rolston.  Both situations have their pros and cons.  But maybe my thinking is off.....Am I overrating Zubrus?  Underrating Rolston?  Sound off below!