Now that Ilya Kovalchuk is finally, officially, and definitively a member of the New Jersey Devils for the next 15 years, Lou Lamoriello has a new, crucial short-term problem.  The Devils are over the salary cap by $2,698,333 $2,943,333 (Update Note from the Author: I mixed up the 6 and the 9 earlier, and that cap hit is $25,000 too high. In a word: oops.  Thanks to Frank for catching the error and the note on Rod Pelley's salary.) Changes now made accordingly) with 21 spots filled on the New Jersey roster, as noted by CapGeek.  The Devils have to be under the cap by the time the season starts.

Lou has this month to figure out who to trade away or demote to not only clear roughly $2.699 $2.943 million in salary but also enough space to replace the traded-or-moved player.  For example, if the Devils just moved Bryce Salvador and his $2.9 million cap hit to Albany, then the Devils would not be under the cap.  However, That leaves $43,333 in cap space over the cap. There's not even space to add a minimum salary for a player, which is $500,000.  The Devils won't be able to replace Salvador on defense unless Anssi Salmela makes a miracle recovery before the start of the season.  Even if that happens, every Devil fan will be praying that no one gets hurt because the Devils may not have the space for a replacement.

My point is that the Devils have to clear more than just $2,698,333 $2,943,333.  If this seems familiar to you, that's because it was one of my main points back on July 20, after the first Ilya Kovalchuk contract was submitted.  The point is largely the same, only more money must be cleared.  In that post, I explained why Bryce Salvador and Dainius Zubrus wee the prime trade targets. They still are.  In fact, Zubrus ($3.4 million cap hit) alone would get the Devils to safety for now; the Devils would have $701,667 free in that case - enough for a cheap player or prospect to replace his spot.

They aren't the only options, the Devils could be incredibly dumb and move Travis Zajac, or we can see something that hasn't happened with this franchise and witness someone with a NTC waiving it for a transaction.  What follows is a quick primer of who else is over the cap, who has a ton of cap space, and a warning to not get too close to the current New Jersey prospects and draft picks.

The Current Cap Situation as of September 5, 2010

CapGeek is an invaluable resource for anyone looking to see who is and isn't under the salary cap. The front page has a daily-updated list of the cap space and roster size of each team.   I've taken two screen caps this morning of that front page to show off the current situation.  As more moves are made this month, this will change; hence the need for the screen cap. Just going to the link won't mean much in a week or so.  There will certainly be more moves in the NHL this month, since the Devils aren't the only ones above the salary cap ceiling:

This is the "top 10" with respect to the least cap space. The Devils aren't the only ones over the cap: Vancouver, Boston, Calgary, Toronto, and the New York Rangers are also above the limit.  Some of these teams have easy outs: Toronto isn't much over the cap, and they'll need to demote one of their 24 players to get to the 23-man roster limit.  They'll be fine.  The Rangers are just barely over, and even just moving a player down to the AHL would make them more than safe.

I'm not sure what Vancouver, Boston, and Calgary plan to do.  In the last post on this subject, user triumph44 noted that those three teams can place Marco Sturm, Sami Salo, and Daymond Langkow on long-term injured reserve. That would get those three teams cap-compliant as long as they remain injured.  Admittedly, I'm not too sure what their status are right now. The groin injury suffered by Salo was reported as "out at least 3 months" as of July, according to this USA Today report. Langkow recently got cleared to light skating after suffering a fractured vertebrae last season, according to this post at NBC's Pro Hockey Talk.  Earlier last month, NESN reported that Sturm wants to make a comeback, but that's not likely to happen before November.

In any case, I still think those three teams are still additional obstacles for the Devils to make a deal since all three can do the same should they have faith in their respective injured players returning to play.  Moreover, the Devils aren't going to be able to make a trade with them or any of those 10 teams I put in that screen cap.  OK, I doubt the Devils would trade with the Flyers in most circumstances; but they - along with Ottawa, Detroit, and Pittsburgh - can't take much back.

Fortunately for the Devils, there are plenty of teams with lots of cap space per CapGeek - at first glance: 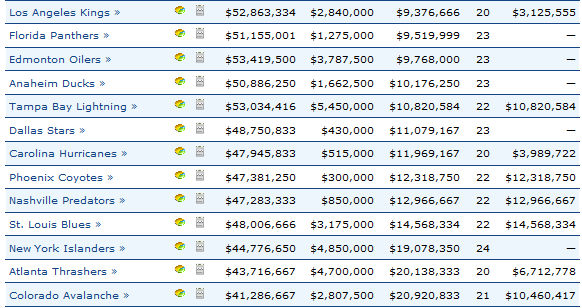 Yeah, there are 13 teams with at least $9 million in cap space.  Clearly, a number of these teams are operating under self-imposed budget limits and a number of these teams are satisfied with the amount they've spent.  What really cuts down the list of potential targets is the roster size.  Of these 13 teams, 5 have at least 23 players on their active roster.  Those 5 teams - Florida, Edmonton, Anaheim, Dallas, and the New York Islanders - don't have to do anything they don't want to do.  They have a full roster and they are well under the salary cap upper limit; they are ready for 2010-11.  So for the Devils to make a trade with either of those teams, Lou has to be prepared to take someone back (not desirable right now) or those teams have to have plans to move or demote someone else on the roster in response.

I don't know who is and who is not operating under a self-imposed budget; I would think those teams aren't going to be willing to take on more salary.    There is one team who have to take on salary, though: the Colorado Avalanche.  The salary cap also has a floor and for this season, it's $43.4 million.  Colorado has to add $2.12 million to get to that floor.  They also has two spots open on their active roster, which is good.  What they decide with Peter Mueller could change their situation completely, though. He's a restricted free agent who made $1.7 million last season. If the Avalanche give him a healthy raise (not sure why they would, but whatever), then they can be over the floor and don't necessarily need to add salary.

My point is that it's going to be difficult for the Devils to make a deal with any of these teams, even though they each have significant amount of cap space available.

Don't Get Attached to the Prospects & Draft Picks

In addition to the reality that since most of the league does not have to add salary to their roster along with 5 other teams being over the salary cap right now, the Devils has very little leverage for trades.  Since the Devils absolutely must get rid of salary, Lou will have to be willing to give up some additional assets along with the contracts he wants to move.

Now, I understand some Devils fans are excited about prospects like Alexander Urbom, and have hopes for Jacob Josefson or Adam Henrique as possible third line centers this season.  A quick glance at HF's top 20 list shows that quite a few of these players have pro potential to some degree (thanks devsfan9).  Don't mistake me, I think developing prospects is important and I have no problems with prospects being given a shot when they are ready.

However, all prospects are unknown assets to some degree. We actually don't know whether Urbom, Josefson, Tedenby, Corrente, Eckford, Henrique, Palmieri, Burlon, and so forth will make it in the NHL, much less hit their ceilings.   Ilya Kovalchuk is most definitely a known asset, and if his re-signing means the Devils have to part with a few unknown assets, then I'm prepared to see that happen.  Would I like to see Tedenby or Josefson elsewhere? Of course not.  But if they have to be thrown in for someone else to take Zubrus' or someone else's contract, then I would understand.

The Devils could do the same, only with the even more-unknown asset of draft picks.  I would prefer to see the Devils give up their first round pick for 2011 or 2012 before giving up a near-ready prospect in a deal.  However, those picks may not even be New Jersey's in a few weeks.  The NHL hasn't given up on possibly penalizing the Devils for the first Kovalchuk contract being rejected for circumvention.  While there won't be any penalty to the salary cap, one of the possible penalties is a loss of draft picks.  Given that the NHL has until September 17 to decide on any kind of penalty per Gulitti, draft picks probably won't be part of any trade package before that date.

Either way, the main point is that the Devils don't have the luxury to just say "Who wants Zubrus or Salvador" and expect teams to line up with offers.  The Devils may very well have to sweeten the proverbial pot, so be prepared for that to happen.

Hey, What About Trading Brian Rolston, His Cap Hit Would Be...

Stop. He's got a no trade clause.  Unless Brian Rolston plans on waiving it anytime soon, this is not an option.  I understand that clearing $5.0625 million would be fantastic.  Unless I'm mistaken, that would require someone on the Devils to waive a NTC for the first time in the history of the organization.  It would also require someone to want Rolston's ugly contract too.  Please don't suggest this (or Colin White for that matter, who only makes $100,000 more than Salvador).

Yes, the Devils could waive Brian Rolston, and even if someone picks him up on re-entry waivers, the Devils would save $2.5 million.  I'm not sure the Devils would be keen on paying $2.5 million for Rolston being on someone else's team, plus it would open an active roster spot with the Devils still being under the cap.  It's not a very good option, in my opinion, for that reason.

So, yes, it's also an option, but I'm not really confident in it as a viable option.

By now, you may have noticed that most of these aren't really favorable options for the Devils.  They're not.  If nothing else, know this main point: the New Jersey Devils do not have the luxury of making a favorable deal.  The Devils may have to make trades where they are the "losers." They may have to make some transactions that hurt the team to some degree.  They may have to wait until the last possible moment, since most other teams aren't in the Devils' situation.  Feel free to speculate on possible deals. Please leave your thoughts on what you want the Devils to do, and what you hope they don't.  However, understand that they aren't in full control of their situation.

The Devils have one clear goal now by the start of the season, to get under the salary cap.   All we can hope to do is that the Devils don't lose too badly in the deals they have to make, and that Travis Zajac - the most attractive asset - is still lining up at center for New Jersey.

In Lou we Trust.