Does the Devil’s Defensive Unit Have Enough Offensive Talent to Compete in the Playoffs?

Share All sharing options for: Does the Devil’s Defensive Unit Have Enough Offensive Talent to Compete in the Playoffs?

One thing we have heard about this offseason (besides a certain Russian winger who wears #17) is how the loss of Paul Martin, one of the Devils puck moving defensemen, would leave the Devils weaker in an area they already had their struggles with, specifically moving the puck out of their defensive zone and facilitating the start of an offensive rush.

If you are of the opinion that Henrik Tallinder does not qualify as an offensive minded defenseman then not only was Paul Martin lost, he wasn't replaced.  This leaves Andy Greene standing alone surrounded by defensive minded defensemen.  That is a lot of responsibility to heap onto someone that makes only $737,500 a year, especially someone who has a limited track record of NHL success.   Further, as Martin Brodeur has even said, there is a different feeling to the current Devils team:

Well, if the Devils are looking ahead to the playoffs already they better make sure they have all the necessary weapons to make it a long playoff season.  This brought a few questions to my mind including: how did teams that have made deep playoff runs in the recent past structure their defensive pairings and did those teams have ‘offensive defensemen’?   I looked at the top six defensemen on each of the Stanley Cup Finals teams for the past two seasons to see how their defensive players stacked up against the current Devils roster.  After the jump I will look at each defensive roster to see how those successful teams set up their minute distribution and pairings.

(Editor's note:  All stats were found at www.HockeyReference.com) 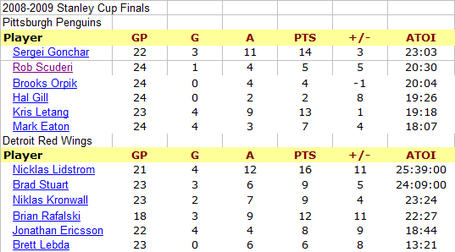 The Penguins defensive unit had a very even distribution of minutes over the course of the playoffs.  The pairings they utilized were Sergei Gonchar/Brooks Orpik, Hal Gill/Rob Scuderi, and Kris Letang/Mark Eaton.   Gill/Scuderi was the defensive shutdown pair and neither Eaton nor Orpik would be considered an offensive defenseman.   The primary puck movers on the Penguins were Gonchar and Letang and both were paired with more defensive-minded players.  Between the two they averaged 44 minutes on the ice per game.  If the shutdown pair of Gill/Scuderi was not on the ice there was likely a pairing that could help start an offensive rush.

There was (and still is) a wealth of talent on this unit.   The pairings for Detroit were Niklas Lidstrom/Brian Rafalski, Niklas Kronwall/Brad Stuart and Jonathan Erricson/Brett Lebda.  The minute distribution ended up creating a top 5 instead of a top 6 in which 3 of their defensemen had substantial offensive abilities.   With two shutdown pairings that could quickly turn the tables on the opposition and move from defense to offense the two-way abilities of the Red Wings defenders make me nostalgic for the days when the Devils had Scott Niedermayer, Rafalski and Scott Stevens. 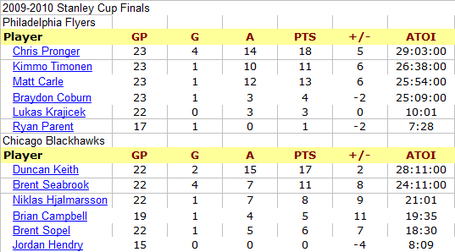 The Flyers (who I personally hate more than the Rangers, in case you cared) took a different approach to minute distribution in last year's playoffs and used a 4-man rotation with Chris Pronger/Matt Carle and Braydon Coburn/Kimmo Timonen as their two primary pairings.   Lukas Krajicek and Ryan Parent comprised the 3rd pairing which played limited minutes.   As much as I hate to admit it, the Flyers had a very good defense last year that had four players who all added a good amount of offensive and defensive ability to the defensive unit.   While I was shocked at the minutes each player logged, benches certainly do get shortened in the playoffs and the Flyers milked their veterans for as many minutes as they could.

The 2009-2010 Stanley Cup Champions used primarily a 5-man defensive rotation in last year's playoffs.   Their pairings were Duncan Keith/Brett Seabrook, Niklas Hjalmarsson/Brian Campbell with Brent Sopel taking up some minutes, primarily paired with either Jordan Hendry or Hjalmarsson.  The offensive minded defensemen on this team, Keith, Campbell, and while he doesn't have a huge amount of offensive abilities I think you can include Sopel in this group.  I think one of the scariest things looking at this lineup is the fact that Kim Johnsson, acquired at the trade deadline from Minnesota couldn't even participate in the playoffs because of injury, which would have helped free up more time for Keith and Campbell in more offensive situations.

Offensive defensemen aren't easy to come by.  One of the likely reasons that the Devils have loaded up on defensive prospects the past two years is to try to address this problem through the draft because trading for one or signing a free agent is too large of a drain on a team's resources.    They also are loaded up on prospects because by continually picking late in the first round they don't typically have access to the premium defensive prospects..

So why is it important to look at the defensive ice times/depth charts of other teams?

It's important because those teams got to where the Devils think they can get this year. The Stanley Cup Finals.  The defense, as currently constituted, does not have the offensive/puck movement talent to make it there.   Free agent losses of Scott Niedermayer, Brian Rafalski and now Paul Martin have never been replaced and while the team has some great shutdown defensemen, their only offensive minded defenseman is Andy Greene.

Even before Paul Martin left you could see that the team needed an additional puck moving defenseman besides Martin and Greene.  Also, I don't want to shortchange Greene, but he is not in the class with some of the names on the rosters above.  If a rookie doesn't stand out (Matt Taormina?  Tyler Eckford? Eric Gelinas?) or a serviceable veteran isn't acquired to supplement Greene the Devils will be in trouble.  Tallinder can be useful but he is a better compliment in a pairing with a offensive defenseman.  Anton Volchenkov, Colin White, Bryce Salvador and Mark Fraser are all defensively focused.  Of the players currently under NHL contract only Anssi Salmela (who will be out on LTIR to start the year) might have some offensive upside, but I don't think it is wise to hope that Salmela will be the solution.   Like last year you won't see problems in the regular season as the Devils should be OK with their dynamic group of forwards that should help them win many games, and their defense will be stout and should be a lot tougher.  The lack of offensive talent, however, will likely be exposed but they may face adversity and another quick first round exit if this problem isn't addressed.

So, as we read previews that talk about how the Devils are improved and are one of the better teams heading into the year this post is a warning that unless some areas on the team are addressed, the team could fall victim to the same fate as last year.

Now it's your turn.  Can the Devils be the exeption to the rule of having 2-3 solid offensive defensemen on their team and still make a deep run in the playoffs?  How much does this worry you?    As always thanks for reading and InLouWeTrust!