Share All sharing options for: The Kovalchuk Saga: Assigning Blame

I had planned to write about Nick Palmieri, the Devils overall right wing system depth or minute distribution on the power play but I just can’t.  Not when the contract negotiation to retain Ilya Kovalchuk has gotten to the far reaches of absurdity, and I really can't focus on other issues right now.   Normally I love the hockey offseason and all the speculation and forecasting that comes along with it, but as we approach training camp (you all realize training camp starts in 15 days, right?) the top focus for fans and even team management’s minds is:  Ilya Kovalchuk’s contract approval or lack thereof.

How did we get here?   The Standard Player Contract (SPC) is 11 pages.  Here is the CBA. Turn to page 244 and see for yourself.  It's standard, very little editing. This process of negotiating a second contract, acceptable to the Devils, Kovalchuk and the league has taken over a month.  So I think all of them deserve a certain amount of blame in why this process has dragged on.  So, as I repeatedly hit refresh on my blackberry or twitter in search of news on a process that never seems to end, I decided to think about and write about who to assign blame to in this situation.  Read on after the jump for my thoughts!

While pawns in a much bigger game (future CBA negotiations) the Devils/Kovalchuk do share blame in this mess.  They knew what had been accepted by the NHL in previous contracts.  The only thing they had to do was put together a convincing structure and not try to stretch the ‘line in the sand’ that far.  They failed.  The original contract was blatent in its circumvention, and it was rejected. The second contract while in compliance with arbitrator Richard Bloch’s ruling and guidelines, was just as bad as the first that it was obvious that the last two years were only inserted to drive up the cap hit to make the deal more palatable for the NHL.   That said, as all of us have discussed on this site, nothing in the CBA prohibits such contracts and there had been similar deals completed in the past.

But is it really that hard to put together a long-term deal giving the player the money (or appearance of money) that he wants and giving the Devils and the league an acceptable cap hit?  Here is a 13 year deal that gets everyone what they want: 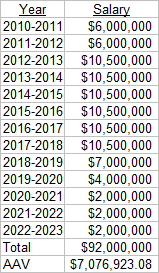 Even operating under the assumption that he will only play 10 of the years, this would get passed.  The average of the top 10 years is $8.6MM per year and the cap hit would be $7MM which would give the Devils a cap savings of $1.7MM.  (Trust me, I know there are a million other scenarios that others have played out, this is just an example) Also, I know that Lou Lamoriello doesn’t want a high cap hit but $7MM for a player of Kovalchuk's talents. $6MM was pushing it.  In the above scenario Kovalchuk gets $92MM.  If the $100MM is SO important to him, then make it a 14 year deal adding adding appropriate amounts to keep the rate of decline similar. There, done.  Wasn’t that simple?

The blame for turning this into a circus is at the feet of the NHL and the ineptitude of the NHLPA.  I am amazed at how the NHL operates and more importantly how the NHLPA lets them get away with it.  The NHL has taken one player contract and is now trying to generate concessions out of the NHLPA for it.  It is especially interesting that the NHL is alienating a franchise that has a GM who would normally be a strong ally to the NHL in the next set of labor negotiations.  But they get freedom to do this because of the NHLPA.

Simply put, the NHLPA is a disaster.   What union renegotiates a CBA (one where they got the short end of the stick) two years before the expiration of said CBA when it has little overall benefit to do so?  The NHLPA.  What union continues to be leaderless and keeps tip toeing around hiring leadership even now when the NHL is trying to step on the proverbial throats of the union while it has no leader?  The NHLPA.  I apologize if I am sounding like Larry Brooks but the inefficiencies of the NHLPA is mind boggling.

If what the NY Post reported last night is true (and I will say that I know everyone questions the Post and its reliability but it has been on top of the Kovalchuk story as it was the first to report the original 17 year deal) the NHLPA is currently talking to the NHL about two stipulations that the NHL wants enacted into the CBA right now.

This quid pro quo would essentially be a trade of the registration of the Kovalchuk contract, further ‘approval’ of the Roberto Luongo/Marian Hossa deals (yet Chris Pronger/Vinny Lecavlier are OK, which I still don’t understand)  for two new restrictions on long-term contracts.

1. That the cap hit on future multiyear contracts will not count any season that ends with the player over 40 years of age. The cap hit would be based on the average salary of the seasons in the contract up to age 40.

2. That the cap hit on future contracts longer than five years would be calculated by granting additional weight -- perhaps the average -- to the five consecutive years with the largest average salary.

Why, why, why would the NHLPA even entertain this?  (Although I do think the first provision is a fair one.) While the Bloch ruling gave the league a lot of leverage it would seem the Devils addressed the issues in the latest contract to Kovalchuk.   If the league should reject the deal, and a different arbitrator reverse the league's decision, they lose the guidelines the ruling has helped give them.   Per a tweet from Darren Dreger, it seems that the NHLPA has been working with the NHL to rectify the long-term contract loophole.  Um, why?  Why lose a bargaining chip for the next round of negotiations?  Are they just in a giving mood this time of year?  If the situation was reversed would Bill Daly help the union close a loophole in the CBA that was being exploited by the league?

Essentially the NHL is asking the NHLPA to help them rectify a mistake that they didn’t catch in the last round of negotiations that the players AND owners have used to their benefit.    Both Hossa and the Chicago franchise benefited in that transaction.   So, Gary Bettman and Daly are once again trying to save the owners from themselves.  Like many sports leagues the owners put themselves in unfavorable situations and the players union is then asked to help make up for the owner's mistakes.  Why is it the union's fault that owners offer players these deals?

Remember, while a player does have some penalties they are exposed to in Article 26 of the CBA, the owner/franchise can take a severe hit in cap space due to a circumvention.

As an aside to the whole ‘ultimatum’ issue in the Post:  Beyond the obvious answer of having less money to spend on players, why would the union care if a team gets fined for circumvention?  Trust me, I do not want any decisions made by the NHLPA to affect the Devils salary cap, but it's not their job to look out for the teams, their job is to support the player.

The NHL is trying to take advantage of the union while it can, and  before the CBA is actually up and I can’t blame them for trying.   I mean what did the NHLPA do when faced with the original grievance on the Kovalchuk contract rejection?  They lost a case most thought was easily winnable.  They won’t confirm Donald Fehr as their leader, but they have no problem helping the NHL drive down the salaries and monies their players earn.   Good work.

The idea that they are using the Kovalchuk contract as a chip in negotiations right now totally throws out the notion that they reviewed the latest contract in good faith. The idea that they could amend the contract is even worse. What's next? Will the NHL now just start allocating players to teams? No need for free agency!

This whole circus just makes the NHL seem petty and vindictive. It's hard to take the league/game as seriously as I do, when it is run the way it is. The game and promoting it within North America always seems to be secondary to the NHL.

I hope the NHLPA can get their act together.   I hope they stand their ground and bring a contract rejection to arbitration and deal the NHL a defeat.  Like I said, I hope.

I also hope that recent tweets by Larry Brooks and Scott Burnside that a deal is close is true.  Although I still don't understand why the NHLPA would bargain to begin with.

Now, the moment you have been waiting for......

So who do I assign blame to in this current mess?

Agree?  Disagree?  Sound off below and thanks for reading my rant.