Share All sharing options for: The Increased Number of Teams Over the Cap Will Make it Harder for the New Jersey Devils to Dump Salary

CapGeek is a fantastic resource for finding out where teams stand with respect to the salary cap, how each player's contract counts against the cap, and who exactly has some kind of deal with the organization on the roster.  One of the great features is that CapGeek actually has an updated table right on the front page that summarizes each team's situation.  Today, I noticed something quite shocking: 5 teams are currently over the salary cap ceiling of $59.4 million.  Here's a screenshot of that front page feature from this evening: 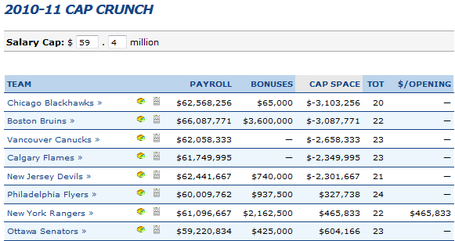 CapGeek has Ilya Kovalchuk's contract listed for the New Jersey Devils, so that's why they are $2.3 million over the limit.  However, I just realized that other teams are also over the cap right now: the Chicago Blackhawks (who were over the cap  already on July 1); the Boston Bruins; the Vancouver Canucks; and the Calgary Flames.   For now, this is acceptable as the NHL CBA allows for teams to go over the upper limit by 10% before the start of the season.   Yet, all five teams will have to make moves to get under the cap.

What's also interesting is how each of these teams all have at least 20 players on the roster.  Only Chicago has to deal with the difficult trick of shedding $3.1 million and then add a player to their roster while remaining under $59.4 million by the time the 2010-11 season begins. Still, given that the number of teams using this offseason buffer has increased over time, it's going to be much more difficult for them to dump contracts.  Not only are they without a lot of leverage in deals to dump salary, but now they have competition as well.

Perhaps I'm getting to hasty worrying about this.  Boston's only over the limit because CapGeek counts Tyler Seguin in their lineup; the Bruins can simply re-assign him back to junior and their problem is solved.   Chicago may solve their problems by dumping Cristobal Huet to the minors for a season. Their $4.1 million bonus penalty may not carry over to 2011-12, Marty Turco can go elsewhere, and there may be enough room to bring Huet back.   Vancouver and Calgary both have a surplus of defensemen and can get out of this jam by just trading/dumping one of them.

Of course, those are just cold looks at the situation, they may not be feasible for a variety of reasons and so may not be pursued by the team.  Huet may not want to go to the minors; the Bruins may intend to keep Seguin up in the NHL; and the Canucks and Flames may not want to let go of some of their defensemen.

Incidentally, if the arbitrator sustains the rejection of Ilya Kovalchuk's contract and Kovalchuk signs elsewhere, then that would be a blessing for the Devils' cap situation. Not only does his $6 million come off the books, which would allow the Devils to have about $3.7 million in cap space for this season; but it'll allow more money for an eventual Zach Parise contract extension sometime in 2010-11.  That said, I feel this is unlikely because A) the arbitrator could overrule the rejection and B) even if sustained, the Devils could simply sign Kovalchuk to a different deal. In my mind, Kovalchuk wouldn't have gone through a press conference announcing how he wants to be in New Jersey knowing that the contract could have been rejected by the league unless he really wants to be a Devil.   Considering the possibilities of A and B, the Devils will then have to dump salary not just for this season but also with next season in mind in my opinion.

Remember that the Devils don't actually have a third line center right now. They'll have to add salary to fill that spot - even if it is a prospect. Even if the team moves one of their wingers (e.g. Dainius Zubrus) to center the third line, the Devils will still have 12 forwards and be over the cap.  Unless the Devils dump only defensemen, another player will have to be called up (which means a cap hit) or signed (which means a cap hit) just to get a full roster.

In any case, what makes the cap issue even more difficult for New Jersey, Boston, Chicago, Vancouver, and Calgary is the decreasing amount of teams underneath the cap floor.  The New York Islanders just crawled over the magic $43.4 million floor recently; leaving the Colorado Avalance ($38.4 million) and the Atlanta Thrashers ($40.7 million and only 18 on the roster) as under the floor.   Yes, there are 10 other teams with over $9 million in cap space right now.  They are definite targets as well, but only Colorado and Atlanta absolutely have to add salary for this coming season.   Now that they got 5 suitors who have to dump salary, their leverage just got stronger.  They can make demands for certain players.  They have to do work, but they don't have to get as creative as the 5 teams currently over the cap.

Notice that I didn't bring up the Philadelphia Flyers, New York Rangers, and Ottawa Senators yet. I included them in my snapshot because they are dangerously close to the cap ceiling right now.  Should they want to add cap space to allow for midseason trades and call-ups for injured players, then that's three more parties to the dumping mix.  Three parties that actually have some leverage given that they are, in fact, under the cap.

My main point is that with the way things currently stand, it's going to be quite difficult for any team to dump cap space.  We will probably see teams demote or waive players rather than just trade them off along with a top prospect or draft pick.   Once Richard Bloch makes his ruling, the situation will become clearer. However,  should Kovalchuk remain a Devil, the cap situation will become incredibly more difficult for Lou - much more than what it was back on July 19.

I'd like to hear what you think about the situation.  Knowing how difficult it'll be for any team to dump salary at this juncture, would Kovalchuk becoming an UFA and signing elsewhere upset you less (assuming it would)?   Should Kovalchuk remain a Devil, what moves do you think the Devils should make to get under the cap? (NOTE: Do not suggest trading players with NTCs unless you got a way to give me a unicorn.)  Please let me know what you think in the comments. Thanks for reading.