On Wednesday, I made a post detailing how Colin White's defensive performance last season matched up with similarly paid defensemen in the league, a response to a request by ILWT user FrankG929.  I found that White was above average within the group (and all other defensemen in the league who played at least 20 games and 15 TOI/60 last season) in three out of the four defensive stats looked at.  I concluded that he was good, but not great.  Given that he was "keeping pace" with his peers, if one is to assume that $3 million per year is the average salary for that group, then his salary must be seen as justified.

I also made a big error by only focusing on defensive stats.  I assumed that since Colin White has never put up more than 20 points in a season, the advanced stats on offense would show him to be bad.   I wanted to compare Colin White to other defenders making about $3 million per year on what he is being paid to do: to be a defensive defenseman.   This was a big omission on my part, and in the comments, triumph44 noted this stat about White in 2009-10 which sparked my interest to check the offensive numbers as well:

colin white has the 2nd highest GF/60 among NJ defensemen (if we don’t count anssi salmela, who played the majority of the season with atlanta). he has a higher GF/60 than andy greene. i’m not going to compare his GF/60 to other D on this list, but again – GF/60 and GA/60 for one season are not particularly meaningful.

Granted, an on-ice GF/60 (on-ice goals for per 60 minutes) of 2.5 isn't much to write home about, but I realize now that I should have done the offensive advanced stats on Wednesday.  So I pulled the numbers from Behind the Net and organized them to make up for my stupid omission on Wednesday.  I'm still focusing only on last season, so please take the GF/60 and on-ice impact on GF/60 values with a grain of salt.   Besides, a defenseman's going to have more control over shots against than goals against; a goalie playing great can bail out

My findings come after the jump, so please set your viewing to "Wide" before continuing to see the entire chart. Believe it or not, Colin White wasn't dead last among Frank's group of 18 other similarly-paid defensemen.  Plus, if you remember this post from last Saturday, then be ready to see how much White sticks out in terms of adjusted Corsi per 60.

As with Wednesday's post, all numbers come from Behind the Net and they represent 5-on-5 situations from the 2009-10 season.  The rankings are out of 135 defensemen: 132 who have played at least 20 games and had an even strength TOI/60 of 15 or greater, plus Cam Barker, Rostislav Klesla, and Matt Greene. Those three were on Frank's original list, but didn't make that cut.

This chart, like Wednesday's defensive advanced stats chart, is sorted by quality of competition.   Overall, Colin White is surprisingly not completely close to the bottom like, say, Matt Greene.   Colin White had a whopping 2 goals and 10 assists last season; yet, he finished above average among the league in GF/60 and his impact on GF/60. Granted, within only one season, it doesn't say a whole lot other than that the Devils' offense didn't falter when White was on the ice.   As far as how Colin White stacks up within this group of 18 other defensemen:

Essentially, White's OK on GF/60 but not so much on SF/60.  Generally, it's not good for a player to have a negative impact on the rate of shots by their own team at even strength.  However, I think this is defensible for two reasons.   First, remember that White's a defensive defenseman.  His main job is to defend and in that regard, he has done fairly well among his peers based on what I found on Wednesday.  White does not possess a lot of offensive skill, there has been no production to justify said skill, and so to expect him to be a big contributor on offense is misguided. Second, let's recall Saturday's post on adjusted Corsi.  Colin White was used constantly for defensive zone starts in 2009-10.  Lemaire started White in his own end 118 more times than at the offensive end of the rink.  White was often in tough situations; therefore, it was more difficult for him to get the puck out of his own end and going in the right direction.

As noted in Saturday's post, JLikens showed that Corsi can be adjusted for zone-start by multiplying the difference between defensive and offensive zone stats by 0.8.   Given how much White started in his own zone, he'd had a rather large - and positive - adjustment in Corsi.    Here's the adjusted Corsi rate of the other 18 defensemen in this group last season. 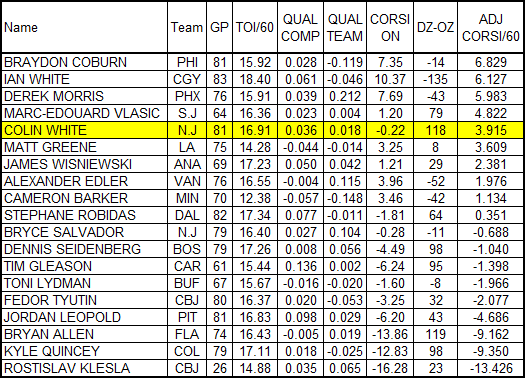 Fifth! Colin White has the fifth highest adjusted Corsi rate among this group! Not only was it boosted by a large adjustment factor, but White's on-ice Corsi rate was just below zero.   This meant White nearly broke even to begin with, so the adjustment put him into the positive side here.  All that with a good quality of competition value as well.

Compare this with Bryan Allen, who had one more net zonestart.  Allen's adjustment was higher than White by 0.8, but he's still third from last here because his on-ice Corsi rate was so terribly low.   The same can be said for Quincey, as well as Dennis Seidenberg and Tim Gleason to a lesser effect; they started in such a deep hole than adjustment along couldn't get them to break even.

What also surprised me on this list was how so many defensemen started their own zone more often than not. Granted, the degree of that varied wildly, but the only four players here got the benefit of starting noticeably more on offense: Ian White, Morris, Edler, and Barker.  Unless I'm mistaken, they're two way defensemen, so utilizing them more for offensive starts makes sense to me.  Speaking of, Ian White's Corsi was ridiculous last season. Even with such a negative net zonestart value, he's still got a great adjusted Corsi rate along with a high quality of competition value.  As an aside, I can definitely see Ian White's value offensively with these stats in addition to his 13 goals and 38 points last season.

Overall, offensively, Colin White was not the worst defenseman in this group.  Compared to his peers, he was poor in terms of on-ice SF/60 and impact on SF/60.  However, his adjusted Corsi rate was great and, while not meaning much other than context, his GF/60 stats weren't bad either.

Basically, in conjunction with what I posted on Wednesday for defensive advanced stats, I still think Colin White is a good, but not great defenseman.  He fits in well as a #3 guy on the blueline, he has faced tough competition, he has played in tough situations more than most defensemen, and the Devils' offense doesn't completely die when he comes on the ice.

So was Colin White worth $3 million last season?  Let's put it this way.   If he was consistently at the top of these stats - defensive or offensive - among this group of similarly paid players, then I would conclude that he's actually underpaid by being superior than most or all of his peers.   If he was consistently at the bottom of these stats, then I would conclude he's being overpaid.   However, Colin White's performance did not fall into either situation. He's above average in most as he ranked poorly in three out of the total of nine looked at across both posts.  You could argue that most these players should not be paid $3 million except for the best (Fedor Tyutin for defense, Ian White for offense).  However, the market's spoken.  Given that everyone in this group of 18 other defensemen has been/will be paid about $3 million, I would say that it's a fair value.

Please let me know your thoughts about Colin White's offense and adjusted Corsi rate in the comments. Thanks to FrankG929 for the initial list of players to look into, and triumph44 for the inspiration. Thanks for reading.