The New Jersey Devils & Adjusted Corsi: Where Colin White Does (A Lot of) Work

Share All sharing options for: The New Jersey Devils & Adjusted Corsi: Where Colin White Does (A Lot of) Work

Back in May, I wrote extensively about the free agents the New Jersey Devils could sign, how Paul Martin (example) and Ilya Kovalchuk (example) in particular compared to those other unrestricted free agents.   I utilized a number of advanced statistics from Behind the Net to explain my own reasoning on what the Devils should do and what players were more desirable than others.   One of those stats was adjusted Corsi, or a player's Corsi value modified by their net zone starts.

As a quick aside, I'd like to thank Derek Zona for explaining the formulation to me, and incidentially, he's got a post on how last season's Edmonton Oilers look by those stats up at Copper & Blue.    I'm doing something similar here for the 2009-10 New Jersey Devils as well as the newcomers to next season's team.

Before continuing, let me explain a few terms.  Corsi is a counting stat for being on the ice when a shot is attempted (either on net, blocked, or missed).  If you're on the ice when your team attempts a shot, that's +1 Corsi; if you're on the ice when the other team attempts a shot, that's -1 Corsi.   It's generally used for skaters as a measure of puck possession and control, since teams usually attempt shots when they force their opposition back into their own zone.  At even strength, 5-on-5 play, this value is telling of who's really having a positive impact for their team.  Zone starts note where a player has started their shift; and per the mathematical work of JLikens, zone start definitely influences a player's Corsi (easier to get it if you start on offense) and so he has come up with a correction factor of 0.8 at even strength.    A good resource that records both Corsi rates and zone start counts is Behind the Net, so I have used that to come up with the following chart. 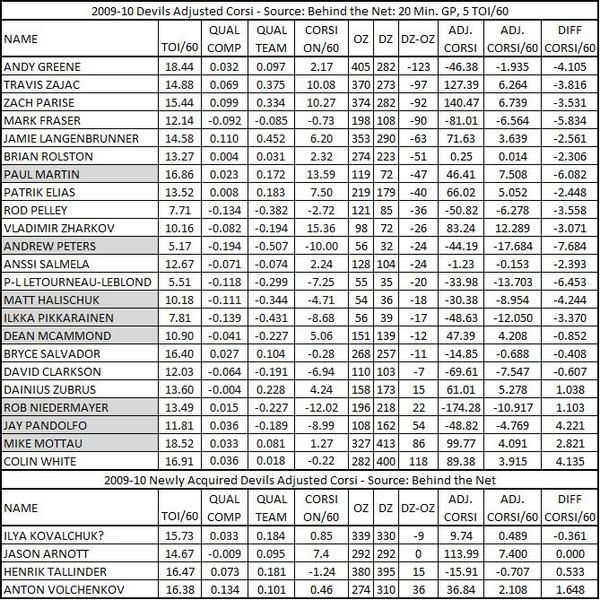 1) Yes, some of the numbers are a bit different from my original posts on Kovalchuk, Martin, etc.  It appears some of the Corsi On and TOI/60 numbers were modified a bit, so they're not exact matches.  They haven't changed so much that it should affect

2) The players highlighted in gray are players who are no longer with the team or remain unsigned.  I made two exceptions. I didn't include Martin Skoula since he was traded to the Devils and only played a part of the season with the team.  I included Ilya Kovalchuk in the "newly acquired" section since he was once signed here; and instead of the original list for the same reasons as Skoula.  Should he be re-signed a second time, then his numbers are there.

It's easy to look at a high negative differential like Andy Greene and conclude that Jacques Lemaire was "protecting him" by putting him on farther away from his own zone more often than not.  In this case, I think context is in order.  Greene played a lot at even strength, and he was utilized on more than 600 starts.  To me, Lemaire put him out so much more for offensive zone starts probably because he was the best offensive defenseman on the roster when Paul Martin was injured.   When you're able to start in the opposition's zone, you'd want to put offensive players when you can; hence, Greene, Zach Parise, Travis Zajac, etc. were starting there more than in their own end.

It would be more fair to say that players like Mark Fraser, Anssi Salmela, Andrew Peters, Ilkka Pikkarainen, Rod Pelley, etc. were "protected" by having more starts in their own end. They didn't get nearly as many minutes, their quality of competition were low, and they were often on the bottom six or the third pairing.   Lemaire wanted to avoid putting them in bad positions and bad match-ups; and that's understandable.  I'd even include Vladimir Zharkov in this group since he was also often on the bottom two lines.  That said, his adjusted Corsi was still massive (and leads the team).  It cannot be denied even if he was "protected" to some degree.

Defensive-minded players will likely be used in their own end. Here's where Colin White really shined  last season.  He started in his own end a ridiculous amount of times last season.    Only a handful of defensemen in the entire NHL had a smaller proportion of offensive zone starts and had more defensive zone starts last season: Greg Zanon, Barrett Jackman, Roman Polak.  Lemaire loved to use the Mottau-White pairing for starts in New Jersey's end and as tough as it was, they came up out fairly well.  White will never be confused with a two-way defenseman or any kind of offensive defenseman, so falling just below 0 on base Corsi rates is quite impressive while having more work to do to get the puck up-ice.   In other words, it was harder for White than most of the rest of the team to generate Corsi regardless of his skillset; and he wasn't awful at it like Rob Niedermayer, Andrew Peters, or Ilkka Pikkarainen.

Of course, Mottau also looks better by this measure; but he's not signed so he's not in the headline.  Why he's not getting contract offers is beyond me.  I understand he's in his mid-30s and he's not particularly impressive; but he'd do quite well as a bargain #4 / #5 defenseman for a team.  Should someone get hurt, he can fill in for big minutes for a few games.  Since the Devils added Henrik Tallinder and Anton Volchenkov, though, there's no need to bring back Mottau here.   Given their own adjusted Corsi and that they are used to taking more defensive zone starts, I think they'll be fine by that measure.  If anything, they may give White a break from being the go-to guy for defensive zone starts in 2010-11.

Going back to the incoming players list; I would like to re-iterate that it's OK to get excited for Jason Arnott.  Arnott was used evenly between both zones, so his very solid Corsi rate of 7.4 remained the same in Nashville.  Kovalchuk is more interesting because he was put out there for over 300 defensive zone starts.  Behind the Net uses a player's whole season, there is no breakdown between teams; but given that he played most of last season as a Thrasher, Atlanta decided it was smart to put their sniper in their own zone often.   I don't understand that, to be honest, and I hope John MacLean doesn't follow suit in 2010-11 should Kovalchuk get re-signed here.

Now, adjusted Corsi isn't an end-all, be-all stat.  All it does is account for a player's Corsi given where they started their shifts.  It provides additional context to Corsi and to a player's performance, as it does for White.  He had a relatively tougher job than all of the other defensemen in this regard.  However, looking at the zone starts and Corsi itself still requires context to fully understand; as can be seen with Greene and Parise seeing big drops in their adjusted Corsi but it's not a result of Lemaire wanting to protect them as you could say for Peters, Pelley, Leblond, and so forth.

Nevertheless, the New Jersey Devils didn't have to do as much work as the Oilers to attempt shots, and as a result, most of the team's Corsi adjustments are negative.  That speaks to the talent of the team and Jacques Lemaire's in-game management, in my opinion.   Please let me know your thoughts about these findings in the comments, and thank you for reading.