Blocked Shots, The New Jersey Devils' Rink, and Scorer Bias - A Follow Up

Share All sharing options for: Blocked Shots, The New Jersey Devils' Rink, and Scorer Bias - A Follow Up

A little less than a week ago, I've made the argument that Anton Volchenkov's blocked shot totals may suffer as a New Jersey Devil due to scorer bias (a.k.a. rink bias) and not his own performance.   The main reason why I suspected scorer bias at the Rock was that the Devils had an increasing gap between blocked shots at home and blocked shots on the road.   While it may be possible that the team may play differently on the road than at home, I don't believe that the Devils suddenly become more adept at blocking shots to have 261 more of them on the road than at home.

In the comments, user GoPens!, a blogger at Pensburgh, argued that the difference could very well be from different performances.  GoPens! pointed to the Devils varying goals for and goals against totals at home and on the road as evidence to suggest that the team would play differently on the road.   In retrospect, I think he or she has a good point, though I'd take a step further and suggest that any team changes their game plan based on their opposition and current team from game to game.   While I pointed to Tom Awad's article on shot totals as evidence of rink bias, and I've read this FanPost by ILWT user FrankG929 look into the matter for this past season, I haven't delved into the team stats to see whether it shows up for other stats like blocked shots.

Given the nature of the issue, I think it's worth delving into now. Using the blocked shots numbers at NHL.com like I did for the Devils, I decided to see what the league mean and standard deviation would be for blocks at home, on the road, and in total.

Now this is something.  Compared to the league averages, the Devils' home blocked shot totals have been below the mean by at least one standard deviation except for 2005-06 (and just barely) and 2006-07.   Yet, on the road, the Devils are within one standard deviation of the mean in each of the last five seasons.  Since the Devils are so low at home, this affects them in the total category.  Given the disparity from the mean at home compared to the lack of it on the road, I think this further suggests scoring bias as a source of difference.

What's more striking here, from a league standpoint, is how much larger the standard deviation values are for blocks at home than on the road.  There's certainly variation; that doesn't surprise me.  That the there's so much more of it for teams at home, I think, suggests that scoring bias is rife throughout the league when it comes to shot blocks.   In fact, after the jump, I've decided to see what the means and standard deviations for the other real time super stats: hits, missed shots, giveaways, and takeaways. What I found makes me not want to consider any RTSS stats for a team (or a player) at home or in total. 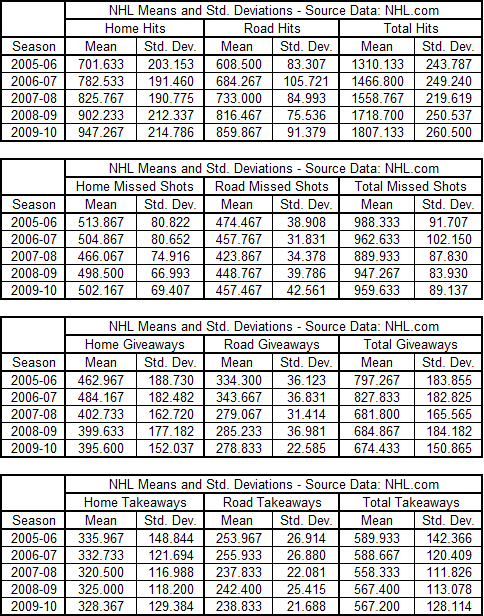 Look at the standard deviations between the home stats and the road stats for each of the four categories.  In each of the last five seasons, the value is far lower for road stats than at home.  This means there is less variation among the road stats.   Given the difference in values, the differences in variation are stark; especially between giveaways and takeaways.  While most teams may be within a standard deviation of the mean in both categories, the different magnitudes of the standard deviation itself suggests to me that there is home scoring bias across the board.   That the means themselves are so much higher at home than on the road; I don't think that can be ignored as well.

I can point out examples beyond just blocked shots.  Here's a stark one: the Edmonton Oilers got tagged with 779 giveaways at home last season.  On the road, only 279 were counted.  While they exceeded the mean by an incredible amount at home, they're actually close to the mean on the road.  The Oilers were awful last season, but I find it really hard to accept that they were so exceptionally awful at home throughout 2009-10 that they gave away the puck more often. It's more likely that their scorers had a far more liberal definition of a giveaway compared to other teams.

I'd have to look at more data, but given how far below the mean the Devils were on hits and missed shots at home but not on the road, in conjunction to what I've found across the league, I think it's quite possible those stats are undercounted at the Rock.

That's a shame for physical players, especially defensemen like Colin White, Bryce Salvador, Mark Fraser, and newcomer Anton Volchenkov, who may have well been throwing plenty of checks throughout the season.  Their numbers, along with the team's, may suffer because the scorers at the Rock may have a more rigid definition of what counts as a hit.  This can hurt them in contract negotiations, this hurts them in the eyes of the fans who point to hit counts as evidence of physical play, and this hurts observers who look at the scoresheet to get an idea of how a game went.    The opposite effect of minimizing a negative stat like missed shots hurts as well for providing a false version of what went on in a game or for a team in a season.

It's great that the NHL.com does record stats like hits, missed and blocked shots, and giveaways and takeaways. However, given that there's so much variation among the team counts at home than on the road, it further emphasizes the need to minimize scorer bias as much as possible.  If this means standardizing the definition of these stats, then it should be done. If this means additional training, then I'm all for it.  Stats are wonderful because they allow us to analyze a player or a team without relying on having seen them and remembering more than what we want to remember.   Yet, they suffer or become incredibly pointless if the methods of collecting data are suspect.

Again, I don't know who is necessarily responsible for changing this.  If I were the Devils and assuming I'd have a some control over this, I'd run a full statistical analysis of the counts and make recommendations to the scorers based on the results.   Until then, I would take any real time super stat recorded at home by any team with a grain of salt and use only road stats if necessary.

Thanks for reading.  Do you agree about the issue of scorer bias with respect to some of these stats?  Is there something I completely missed or messed up regarding my interpretation of the mean and standard deviation?  Did any of the findings surprise you or did it confirm what you may have felt? Please let me know what you think in the comment