Last Season vs. Right Now: A GVT Comparison of the Devils Roster

Share All sharing options for: Last Season vs. Right Now: A GVT Comparison of the Devils Roster

The off-season action by the New Jersey Devils and GM Lou Lamoriello has already altered the roster from last year's, and it's only the first week in July. Jason Arnott was traded to the Devils for a 2nd round draft pick in 2011 and prospect Matt Halischuk. John has a good analysis on the trade and why Lou made it. David Clarkson, Rod Pelley, and Tim Sestito all re-signed with the Devils. Kevin answers why Clarkson's deal is good for the Devils. After losing Paul Martin to free agency and the Penguins, the Devils signed Henrik Tallinder, Anton Volchenkov, Johan Hedberg. Here are John's initial thoughts about the free agency action on July 1st. The Devils also signed 5 prospects to entry-level contracts, including first round draft picks Jacob Josefson and Mattias Tedenby.

So there's an overview of the Devils' moves this off-season so far. Now that things have slowed down a little, I thought now would be a good time to compare the Devils 2009-2010 roster, it's departing players, and the new arrivals at this point in time. I feel Tom Awad's GVT (Goals Verses Threshold) is the best advanced stat for this comparison. If you're unfamiliar with GVT or want to learn more, I highly suggest reading Tom's three part write up explaining it. Here's a quick reference on what GVT measures:

To explain in terms already familiar to sports statisticians, GVT is very similar to VORP in baseball: it is the value of a player, in goals, above what a replacement player would have contributed.

Just a few notes before I get into the charts: I've obtained the GVT of the 2009-2010 season of every player that's played at least one game for the Devils last season. I then separated the players that are currently on the team (returning), and ones that are currently not, in which I named departures. Current unrestricted free agents like Ilya Kovalchuk and Mike Mottau may sign a contract with the Devils in the later days, weeks, or months; they may not. They can talk and negotiate with any team then want. I don't want to speculate or assume an UFA is going to sign with the Devils. On the contrary, I did not place current restricted free agents in the departures category. Lou has qualified them, and they will most likely be re-signed and on the Devils roster at some point next season unless an another team makes an offer to one, and the Devils do not match it.

The first chart is the list of the players that have played at least one game in the 2009-2010 season that are expected to play in 2010-2011. The players with an (*) are RFAs yet to be signed. Val OG is Offensive/Goaltending GVT, Val D is Defensive GVT, and Val S is the Shootout GVT. Again, for the explanation of each and their calculations, see Tom's article here. 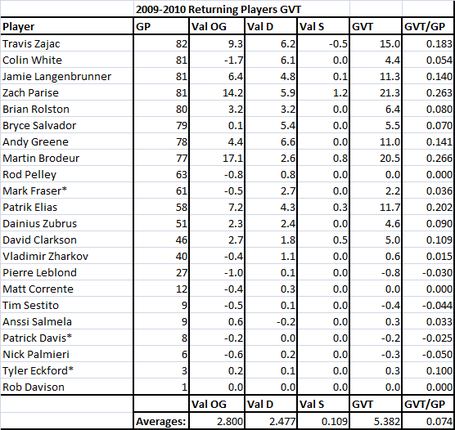 Out of the 22 players returning for next season, six players (27%) had a GVT of 10.0 or more last season. There were also four players with a negative GVT (18%). The average GVT was 5.382. The Val OG average (2.8) is actually higher than Val D average (2.477). Is this to suggest that the Devils were better at scoring goals than preventing them? Marty's goalie GVT of 17.1 brings that average way up; if it was removed, the average would be right around 2.1. So the answer to that question is no.

I've also included the GVT/GP because of the disparity of games played between the players, which does affect GVT. Zach Parise, Martin Brodeur, and Patrik Elias all have a GVT/GP of over 0.2. Tyler Eckford and David Clarkson join Jamie Langenbrunner, Travis Zajac, and Andy Greene with the only players with a GVT/GP of 0.1 or more. If you are worried about Clarkson's contract, this should help relieve any discomfort. Eckford only played three games, but this could be a sign of things to come for the young defenseman.

Here's the next chart, which is the list of players that have left the team or are UFAs not signed. I've added a Status column to show where or what happened to the said player. 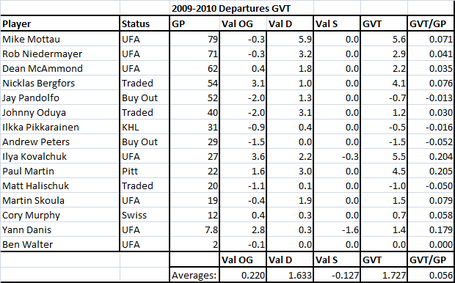 Right away, you can see a lot more negative numbers than the previous chart. Of the 15 players on this list, four of them have a negative GVT (27%). Jay Pandolfo and Andrew Peters were waived then bought out, Ilkka Pikkarainen was loaned mid-season to play overseas, and Halischuk was traded for Arnott. Lou and Co. were able to let go of these players. Bravo. No player had a GVT of over 5.6 (Mike Mottau), which again is good. The average GVT here (1.727) was much lower than the average GVT of returning players. On top of that, with an Val OG average of 0.220, barely any offense has been lost, with the obvious exception of Ilya Kovalchuk and Paul Martin.

Kovy and Martin though do have a GVT/GP of over 0.2, and Yann Danis is up there at 0.179. Kovalchuk is the top UFA this year and one of the most dynamic players in the league, and is not replaceable. Martin was the best UFA defensman this off-season, and it's going to be difficult to replace him. Overall though, the average GVT/GP of 0.056 is lower than the average GVT/GP of returning players (0.074), which makes me believe that most of these players can be replaced without having any real problems next season.

The final chart is the list of new acquisitions this off-season. Instead of the Status column, I've included their previous team in which they obtained this GVT.

Compared to the departures chart, the new arrivals have much better GVT values. I'm very impressed with Hedberg's numbers. Compared to Danis, he's a better backup, and the better replacement. He's not playing 44 games next season, but if he can contribute similar to his 0.255 GVT/GP - which is only a little lower than Marty's (0.266) - then his 1 year, $1.5 million contract will be worth it. He's going to be playing more games than most #2's behind Brodeur in the past per Gulitti. Yeah, we all heard it before, but again, if Moose is able to put up these numbers next season, I'm surely not going to mind when he's in net.

Arnott also has some very good numbers, and a decent GVT/GP at 0.122. He's a good 2nd line center, and compared to Danius Zubus (0.09), who centered the majority of the 2nd line last year, he'll certainly have the better impact.

Henrik Tallinder and Anton Volchenkov will absolutely bolster the defense, and that's about it. The Jennings Trophy winners just got better on defense, which is great. Both of them combined won't match the offensive GVT numbers Paul Martin accomplished, which further supports the need of an offensive minded defender. The GVT/GP of Tallinder and Volchenkov are quite similar at 0.087 and 0.080 respectively, but again are no where close to Martin's (0.205). They are better than the other departed defensemen in Mike Mottau (0.071) and Martin Skoula (0.079). Still, the Devils need a #1 defenseman to replace Martin, especially one that can contribute to some goals.

Of the 37 players that played at least one game last season, 22 of them are returning next season (if the three RFAs are signed), and 15 are not on the roster at this time (another team, bought out, or an UFA). Four players have been signed and traded for for next season. Overall, the players that have arrived are much better than the players that have departed. The average GVT/GP for arrivals (0.136) is more than double of the average GVT/GP of departures (0.56). One aspect where the Devils got stronger was defense, thanks to Volchenkov and Tallinder. Arnott will no doubt make the 2nd line better at center, regardless of his faceofff percentage last year (48.8%).

There are some exceptions as always. Kovalchuk and Martin have yet to be replaced. Kovalchuk is irreplaceable. The good news there is he hasn't signed anywhere yet, and per these articles, the Devils are still in the hunt and he turned down the Kings offer. Martin's replace-ability can be argued, but the Devils haven't replaced him with anyone yet, at least offensively on the blue line.

These numbers are bound to change. The Devils could re-sign one of the UFAs, make another trade, and/or sign more players (the most likely of the three). This was about the current roster. From John's post, many of you believe the team got better on July 1st (68%). Personally, I agreed with the majority. I feel the excitement of the day may have got the best of me, and now, I'm a little more on the fence about it.

What do you think about the comparison? Are the new arrivals ready to replace the departures? Is there something I missed? Did you see something I didn't? Are the Devils a better team? Why? Why not? Let it all out in the comments. Thanks for reading.