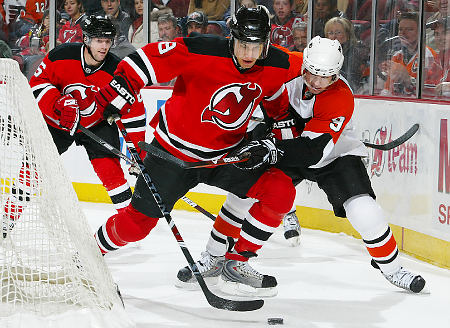 I see the writing on the wall and I know that one of the likely casualties of Kovalchuk being a NJ Devil may be Dainius Zubrus. I'm sure that probably comes to the delight for the many of you who have labeled him "Zubust."

I for one hope it isn't Zubrus who goes because he's a valuable part of this team. I'll admit that yes, he's overpaid for what he does... but that doesn't mean what he does is an asset that's easily replaceable.

I think few fans actually watch this guys work his butt off game in and game out around the boards to make it easier for his teammates to score. They just look at the stat sheets and see a one 60pt player, getting only 40pts a year and label him a "Zubust." It's sad, but I know it's a reality that comes along with casual fans.

Zubrus has for me been a quintessential Devil, a hard working grinder who goes unappreciated. I really hope that this isn't the last we're seeing of him because I am in the campwho think he could and would thrive as the team's 3rd line center. But I also know that bringing Kovalchuk in means there will be some attrition somewhere and since he has no clause on his contract and it is relatively "movable" he is a likely candidate as any to go.

If it is Zubrus, i'd just like to raise a toast for him and show him some of the appreciation that has been sorely lacking from most Devils fans. I think he's earned it and I think those of us who have watched our Devils closely feel the same way I do. If he is on his way out I wish him much luck and success on his next team and hope those fans appreciate him more.