Share All sharing options for: Shot Blocking by the New Jersey Devils: Why Anton Volchenkov's Shot Blocking Numbers May Fall in 10-11

One of the big deals the New Jersey Devils made yesterday was signing Anton Volchenkov to a 6 year, $25.5 million contract.  Volchenkov is largely regarded for his defensive skills, most notably his shot blocking.  According to NHL.com's real-time stats, Volchenkov has been among league leaders in blocked shots for the last 5 seasons with at least 170 per season. He even led the league in 2006-07 with 273 (and played 78 games that season).  Per Kevin's recent post, Ottawa supporter Ryan Classic noted that he had over 1000 blocks in the last 5 seasons and no one else has over 900.

However, I don't believe Volchenkov may get to that 170 mark with the New Jersey Devils.

A Related Digression: I don't think shot blocking has been a real problem in NJ. Generally, the goal of a defense is to prevent shots and help the goalie out, not necessarily stop them in flight.  At best, the shot's blocked and you have possession.  Yet more often than not, the puck gets loose elsewhere or, worse, gets deflected and throws off the goaltender trying to play the shot.  Given that it mostly has been Martin Brodeur in net for the last 5 seasons, you'd want him to face the shot unimpeded when possible.

It comes of no surprise then, that the Devils have been one of the least prolific shot blocking teams since the lockout.  However, when I looked at how the numbers broke down for New Jersey year-by-year, I'm inclined to think that the defense may have been blocking more shots at the Rock than what the official numbers show.  In fact, I'd predict Volchenkov's blocks could very well go down even if he doesn't change how he plays in New Jersey (and get criticized for it, of course).  I've put the figures together and will explain further after the jump.

Official scorers at each game records not just the basic stats, but also real-time super stats (RTSS) such as blocked shots, hits, missed shots, and so forth.  I haven't found a guide or a manual or something that explains how these are supposed recorded, but if one doesn't exist, there should be.  Puck Prospectus' Tom Awad, way back in 2009, pointed out the differences in shot totals from rink to rink.  He called it rink bias, as each rink tends to have the same scorer.

This logic may also apply to shot blocking.  Check out how the Devils fared since the lockout in this RTSS stat. Since the discussion revolves around official numbers, all base stats here on out come from NHL.com.

In every one of the last five regular seasons, the Devils blocked at least 95 shots on the road more than they did at the Rock.  The percent difference (R-H means Road minus Home) is at least 15% in every season and has risen in the last few seasons.   Notice how much higher the Devils are ranked on the road in comparison to being in the bottom third or close to last at home.

I can understand that teams may have different tactics on the road than at home.  Without the last change, defensemen may be on the wrong side on a matchup and therefore have to play more desperate.  However, I have difficulty accepting that possibilty for shot blocking given the disparity between road and home blocks.  Especially in the last three seasons where the core of the blueline has remained the same.  The gap only got larger and larger, though.

Can it be possible that Colin White, Bryce Salvador, Paul Martin, and company were told to get in the way of shots more on the road?  For some games, sure; but for 41 games in each of the last three seasons?  I don't think the Devils became better in blocking shots by virtue of being away from the Rock.   The only reasonable conclusion I can come to is that the scorer(s) for the Devils' home games have under-counted Devils blocks.  The numbers certainly suggest that possibility, if nothing else.

Sure, other arenas will over and under count blocks but since the most they'll play in another team's arena in a season is 3 times, their effect is mitigated.  3 games will not have the same effect as 41, which is how many games the Devils are at home. Just look at the base numbers and the rankings.  What other than home scoring bias can explain the Devils being simultaneously the least prolific shot blockers at home and one of the most prolific on the road?

Therefore, Anton Volchenkov could very well make more of an effort to block shots, and his numbers may suffer anyway because the Devils scorer won't record as many shot blocks as he actually makes.

OK.  Now, here's where it gets a little weird.

I've just given you the last 5 years. NHL.com has RTSS team stats that go all the way back to 1997-98.  I've put those numbers together and they tell a more complex tale than the last 5 years alone. 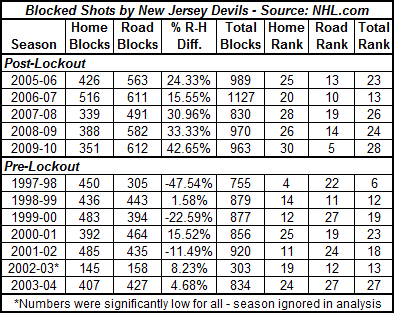 Yes, 2002-03 should be ignored because for some reason, NHL.com has incredibly low numbers for all RTSS stats. Since I doubt that even the Devils went from 920 blocks to 303 in a single season, I have to think the numbers aren't complete.   Still, the Devils have actually had a couple seasons where there wasn't a giant gap between home and road blocked shots.  In fact, there were a few where the Devils got much more blocks at home than on the road.

Here's a graphical representation of where the gaps have formed. It appears that 2003-04 was the last season where the base numbers are even enough to accept the outcome as reasonable.   Mind you, the Devils didn't block a lot of shots in total, but at least it's less likely that it was the result of the scorers not counting blocks. 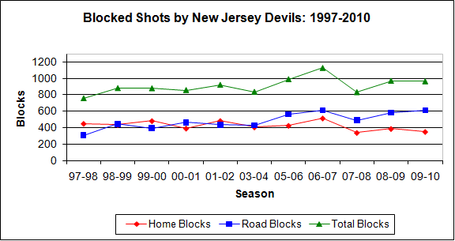 The Devils definitely peaked in 2006-07, and there was a road-home difference of 95 in that season.  At least the one consistency is that the Devils haven't blocked a ton of shots as a team, save for the one peak season. Over the seasons, the percent difference between the road and home blocks have risen; really getting to massive difference from 2005-06 through this past season. 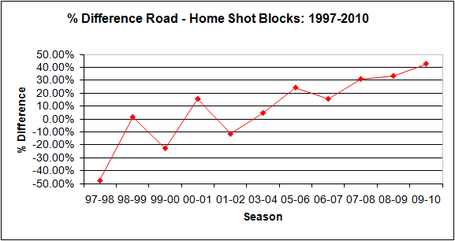 I openly wonder, did the Devils get a new scorer for their home games after the lockout?  If not, then did the scorer at Devils home games change his/her methods or criteria for judging blocked shots?  If personnel did change, would someone (the Devils? the NHL? someone?) kindly inform him/her to be more accurate in their shot block counts?

Admittedly, I doubt those questions will be answered, much less lead to more accurate shot blocking counts.  If it hasn't been found out now, then why make any changes?  It may be more practical for use to prepare to not judge Volchenkov's effectiveness as a  New Jersey Devils in the coming season by how many blocked shots he racks up.

Thanks for reading; now I want to know what you think.  Do you agree or disagree that there is a scoring bias at Devils home games against blocked shots?  If not, then why, because I think the numbers speak for themselves. What do you think needs to happen to fix this - a new scorer, better location for scoring blocks, a standardization of how to record stats, or something else?  Do you think it will be fixed?  Most of all, does this change your expectations for Volchenkov in the coming season?

Please leave your answers and thoughts in the comments.