What is the Benefit of Andrew Peters Fighting for the New Jersey Devils?

Share All sharing options for: What is the Benefit of Andrew Peters Fighting for the New Jersey Devils?

ASIDE: Hey, you have less than 5 days to submit an audition post to become a ILWT writer.  Get them in soon!  Especially if you're interested in the minor leagues or prospects. And now for something completely different, here's a smattering of thoughts on Andrew Peters.

Some still hold that teams today need an enforcer.  A big man to do the dirty work of upholding codes and honor and whatever else by punching another, willing man in the face on the ice.  To stick up for a teammate. To show that he and his team will not be intimidated. To do the one thing they're largely paid to do, drop the gloves, have all the hockey stop so they can tussle, and then be done with it by sitting in the box whilst both teams at their benches bang their sticks against the boards to show support or something.

Admittedly, I'm not a fan of fighting in hockey.  But we'll agree to disagree on all of that.  More importantly, I'm not a fan of Andrew Peters' performance last season.  From my eye, he was quite slow, he didn't play much, and didn't do much hitting like Pierre-Luc Letourneau-Leblond or "energy" play like streaking into corners like Vladimir Zharkov. He's drawn no calls and taken 5 at even strength this past season according to Behind the Net.  Also, Peters' GVT last season was dead last on the team at -1.5, below replacement level.  In fact, he's always been below replacement level as a contributor to his teams throughout his career per Tom Awad's all-time GVT list.  On top of and he put up this glorious stat-line for the New Jersey Devils in 2009-10.

Let us be frank, Peters has one purpose: to bust up dudes with his massive fists.  He's an enforcer, a goon, a fighter, &c.  That is his role.

Mind you, I've met Peters, I have no personal issue with Mr. Peters, and I never want to have one since his biceps are bigger than my fat head.  He's a genial enough fellow and I bear no ill will towards Andrew Peters, the man.    Still, let me raise this question: What benefit does Andrew Peters' fighting provide to the team?  Did the Devils perform any better after each of the 9 fights Peters had in this past season?

Here's a quick and simple way. What was the score before the fight, how many goals were scored and conceded by New Jersey in the period after the fight, and what was the final score of the game? If Peters' fights led to, say, the team scoring more goals, then I'd say that would suggest a benefit.  The team gets pumped up, momentum goes their way, and so forth.  That momentum should lead to goals for it to have a true impact on the game, no? (Note: I'm limiting it to within the period since attitudes and momentum can change during intermission.)

To find out,  I went through Peters' game log at NHL.com to find out the answers.  The results come after the jump. 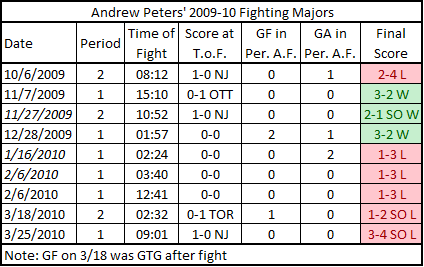 What I discovered was the following.

I will admit that perhaps that looking at the shot counts before and after the fight may be more fruitful. All the same, the scoring didn't pick up after a Peters fight for either team more often than not.  A big part of that could come from how early he fought in a game, and so the game was still up in the air. Therefore, a team may not have broken down an opponent to get a goal or get that lucky bounce that finds the biscuit in the basket.  Still, wouldn't that mean that Peters' fights do not get the team going to produce something on the scoreboard?

I will also admit that the Devils being 3-5-1 in games where Peters fight may very well be a coincidental statistic. If that's the case, then wouldn't that make Peters fighting even more pointless?   That Peters' fights have no effect on the Devils' or opponent's performance?

Since he's got a one-way contract for the league minimum ($500,000) that ends in 2011 according to CapGeek, it's likely he's in New Jersey for another season.   So let me ask you all this question: What is the benefit of Andrew Peters fighting for the New Jersey Devils?  Does it only apply to Peters or to others who drop gloves on the Devils?

Maybe I'm missing something crucial, but I'm not really seeing any real benefit based on scoring after Peters' fights. Let me know what you think about Andrew Peters and his fights in the comments.