Share All sharing options for: 2010 Devils Offseason: UFA Centers by Goals Versus Threshold

Yesterday, I started breaking down the centers who will become unrestricted free agents (UFAs) this summer. The New Jersey Devils will certainly need to fill in spots down the middle; therefore, let's take a closer look at what the market will offer.

I'm focusing on 23 centers, divided up into three groups based on their ice time last season; yesterday, I found that most of them were pretty good at faceoffs last season.  Should the Devils go to free agency to get a center, they should end up being better (on paper, at least) on draws in 2010-11.

Today, I've picked out the goals versus threshold (GVT) for each of the 23 centers from Behind the Net.  GVT is a stat developed by Tom Awad, measuring a player's contributions on both offense/goaltending, defense, and shootouts.  All it measures is results, so players who were injured will suffer just due to not playing. Fortunately, all 23 UFA centers have played well more than half of the season, so the suffering is minimized.  For additional context, I've also included their rank among all forwards who played at least one minute this past season. Through GVT, we can get an idea of what type of player they were last season.

Please read on after the jump to see how the 23 centers compare by GVT.  As an aside, if you haven't yet, please check out this post if you're interested in becoming a writer on In Lou We Trust.  One entry per person, please. 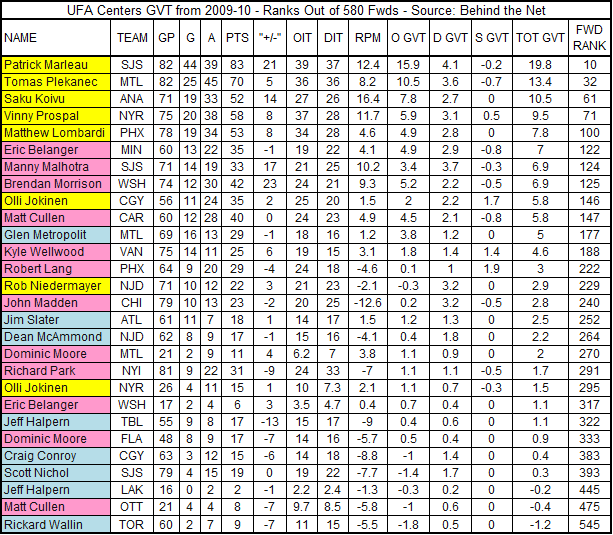 Now, in addition to GVT, I've also included OIT (offensive ice time) and DIT (defensive ice time) to really clarify what the player's role was when they were on the ice beyond what their contributions were.   For example, take the worst contributor (most damaging?) among the UFA centers, Rickard Wallin. We can say was often on defense more often than not since his DIT (15) was higher than his OIT (11).  With the GVT values, we can also say he was barely above replacement level on defense and just bad on offense.

Most of the UFA centers are above the half of the league's forwards in terms of total GVT (tiebreaker was fewer  games played), 18 to be exact and Richard Park finishing just outside of it.  Moreover, only three players finished below replacement level - and two of them only ended up so low in their short time with their new teams in 2009-10. Therefore, the worst center to pick up on the market appears to be Rickard Wallin.  (Aside: I wonder if Leafs fans truly thought he was awful last season?)

Unsurprisingly, most of the significant minute centers are at the top, with Patrick Marleau being the biggest contributor to his team in offensive, defensive, and total GVT by far.  It's even higher than Ilya Kovalchuk's combined GVT from last season; in terms of GVT, he is the top skater available this summer.  Therefore, he's going to command a ton of money.   Second place in offensive GVT goes to Tomas Plekanec, who also finishes second in total among the UFAs; but second in defensive GVT goes to his teammate Manny Malhotra - further evidence that he could very well be the top checking center on the market this summer.  His total GVT was pretty good, finishing just behind Eric Belanger's Minnesota season.

No, that wasn't a typo.  The raw list from Behind the Net actually breaks up player by their team so players can be listed twice.  Eric Belanger, Olli Jokinen, Matt Cullen, Dominic Moore, and Jeff Halpern were on two teams last season, so their GVT from their respective teams are listed separately.  The ranking of 580 is really 580 listings, so some players were counted twice. Therefore, Belanger's time in Minnesota alone leads all of the secondary minute centers.

I've kept it this way on purpose to highlight two findings: One, only Dominic Moore actually had a better GVT with his new team (Montreal) than his original 09-10 team (Florida).  Again, a traded player will play far fewer games with their new team and so it should be no surprised that they will contribute as much unless they were bad with their old team.   Moore stood in that way, good for him, I guess? Two, looking by OIT and DIT, the traded/acquired players didn't have dramatically different roles with their new teams.  Belanger was on defense more often than offense in both Minnesota and Washington, suggesting he was on checking lines in both places.  Halpern saw limited minutes mostly as a checker as a Bolt and a King; Olli Jokinen was on scoring lines in both Calgary and New York (albiet not scoring a lot); and so forth.

The 23 UFA Centers by GVT - No Separation by Team

Still, it's not very fair to Jokinen, Belanger, Moore, Cullen, and Halpern if we just compare their individual contributions to each team among 18 other centers who only had one team.  Fortunately, GVT is additive, as I done in the Ilya Kovalchuk GVT post.   After adding up the respective GVTs of those 5 centers, here's how they would stack up among the whole UFA center group.  Note: I listed each player's final team from the past season. 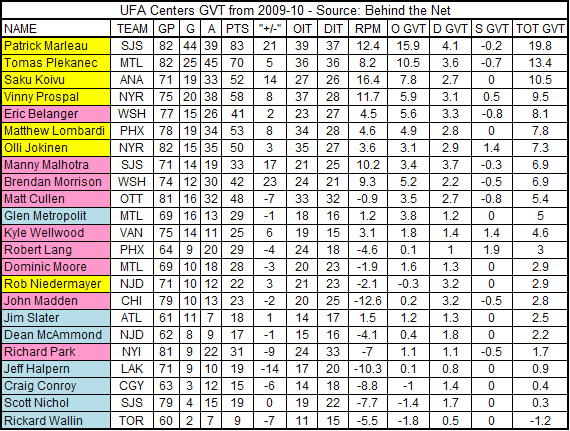 Since I didn't want to re-rank all the forwards to account for multiple teams and remove duplicate forwards, I've excised that from this chart.   That shouldn't be a problem with comparing UFA center to UFA center, though.

Here, the breakdown by ice time is little closer together.  Only Rob Niedermayer sticks out like a sore thumb with his relatively low GVT compared to the other significant minute centers.   He was a checking center last season and there's no reason to believe he'll put up more offense.   Olli Jokinen could have finished much lower if it wasn't for his great shootout GVT.

The top man among the secondary minute centers was Eric Belanger. Belanger's total GVT was quite good last season, even out-doing Matthew Lombardi and Olli Jokinen not only in total GVT but also in offensive GVT.   It's more of an impressive feat when you consider Belanger spent more ice time on defense than offense than both of them.  Maybe he could be a second line center?  The offensive GVT wasn't too much less than the productive and seemingly underrated Vinny Prospal.

Speaking of, how come Devils fans aren't talking up Prospal as a second line center?   Perhaps because he's 36?  Perhaps because he's a Ranger?  For a stop-gap solution, it wouldn't be a bad idea.  Definitely a better by GVT and straight up points; he could be likely cheaper to sign than Olli Jokinen, now that I think about it.

As far as the other end of secondary minute centers, Richard Park finished quite low.  OK, his shootout GVT of -0.5 undercut him last season; however, he wouldn't have moved up the list even at replacement level at shootouts.  Speaking of shootouts, Robert Lang is largely propped up by his 1.9 shootout GVT, he really should be lower than where he ranked here.

Speaking of underrated, how about Glen Metropolit?  Not a lot of minutes, but he was the biggest contributor among all depth minute centers for Montreal.  While Nichol's faceoff percentage was great and Jim Slater wasn't a slouch on Atlanta's bottom six, Metropolit's offensive contributions stood out.  If the idea is for the fourth line to contribute some offense, then I think he needs to be considered.   No, his production isn't much different from Moore, Lang, Park, but on-ice contributions go beyond more than just points, and this shows it.

What about defensive centers?  Well, pretty much all of the significant minute centers have had good to really good defensive GVT contributions in this past seasons.  But if the Devils are to target Marleau, Plekanec, etc., you wouldn't use them on a third line with the exception of Rob Niedermayer.  The other five are offensive players, and Marleau and Plekanec on first line players, after all.  However, why re-sign Niedermayer if Malhotra (3.7), Belanger (3.3), or even John Madden (3.3 but just above replacement on offense)?   For a fourth-line caliber centers, the top defensive contributor was Dean McAmmond (1.8) - though Scott Nichol wasn't too much of a drop-off there.

Overall, most of the UFA centers are more defensive than offensive and so finding a third or fourth line center will be easier than a second line center.  Or so it seems by GVT.

Now that you've seen how the UFA centers stack up by GVT, what do you think of them now?  Do you think much more highly of Eric Belanger and Manny Malhotra?  Are you surprised to see Glen Metropolit be listed so highly? Disappointed to see Niedermayer, Park, and Nichol so low?  Please let me know what you think in the comments.

GVT isn't every thing, so the analysis will continue.  Tomorrow, I'll be looking at the even strength on-ice and on-ice impact numbers for these 23 centers.