Share All sharing options for: 2010 UFA Centers by Faceoff Percentage and Usage - Devils Could Benefit from Market at Draws

The New Jersey Devils currently have one true center under contract for the 2010-11 season in Travis Zajac, according to the current chart at CapGeek.   Sure, they have wingers who can and have played center in Patrik Elias, Dainius Zubrus, and Rod Pelley.   However, last summer, just before the season began, the Devils signed Rob Niedermayer  (original thoughts here) and Dean McAmmond to provide additional cover.  And only Niedermayer stayed at center all season long along with Zajac.

With Niedermayer and McAmmond are both pending unrestricted free agents (UFAs) this summer, the Devils will need to address the center situation.  Even if they commit Elias, Zubrus, and/or Pelley to center, the Devils will still need at least one center for the bottom two lines.   Sure, the Devils have young prospects in Jacob Josefson and Adam Henrique in the system, but they may not be ready for the NHL game yet.   Ben Walter and Tim Sestito has had cups of coffee in the NHL, but they are also free agents and who knows if they'll stick around.

My point is that while this summer's group of impending UFA centers may not teeming with scoring talent, they are still worth looking at to fill the team's needs.  Who among them can do the job as a defensive center? Who among them could handle a scoring line role along with a checking one?   How have they all done in the past season?

These and more questions will be answered in the next few days.  I've taken everyone's suggestions from this post along with the suggested centers made by Derek Zona in this post at Red Light District and  some other UFA centers listed to be available at at NHL Numbers for additional context (e.g. Vaclav Prospal, a.k.a. Vinny Prospal).  As with these example posts on Paul Martin, Ilya Kovalchuk, and Brian Rolston, I'll focus on the centers' on-ice and on-ice impact stats from Behind the Net, their goals versus threshold values, and other stats from the 2009-10 season.

Today, though, I will determine who really played the center position last season, who excelled at faceoffs, and then categorize the UFA centers by how much they played.   The next few posts will be split up by playing time.  Please read on after the jump to see how it all broke down

What I've done is take the 5-on-5 numbers from Behind the Net, sort out all of the centers who have played at least 30 games and a time on ice per 60 (TOI/60) of at least 10.  This way all centers who have played significant minutes up and down the lineup are sorted out.  Don't worry, this not only includes all the suggested centers but also Niedermayer and McAmmond for comparison purposes.

Today, I've taken that list of UFA centers, organized their ages and 09-10 salary (in millions) from NHL Numbers, and taken their total faceoff count and faceoff winning percentage from NHL.com. 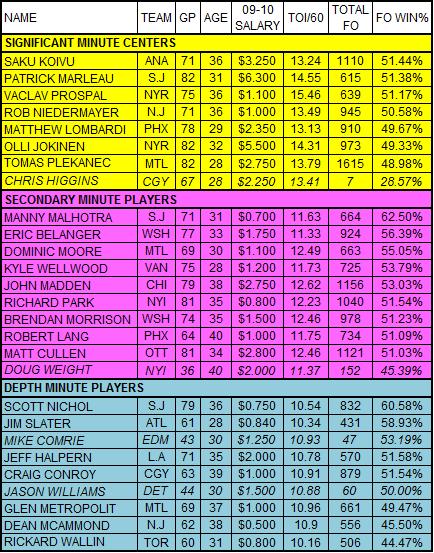 Now, four of these centers are in italics.  Notice that everyone on this list has taken at least 400 draws last season except for Doug Weight, Jason Williams, Mike Comrie, and Chris Higgins.  While they may be listed as centers, they didn't take nearly as many draws as you would expect.  Whereas everyone else has averaged at least 7 draws a game - these four didn't come close.    If they were really centers last season, they would have taken more faceoffs in my view.

Therefore, I'm not going to include those four in future posts.  They may be useful forwards, but they weren't centers last season and so I'm not interested in them at the moment.

Lastly, I'd like to point out who really stood out in terms of faceoffs.  Check out that second group with three centers who took more than 1,000 draws last season for possible defensive centers.   John Madden, at age 38, didn't take weak minutes in Chicago.  He was starting in the defensive zone 155 more times than the offensive zone, and he was taking tons of draws - and winning 53% of them.   Don't think that turning 39 would dissuade the Devils, given recent past center signings of Niedermayer, McAmmond, and Bobby Holik in the prior summer.   Matt Cullen wasn't as successful as Madden, but 51% for someone who took 1,100 faceoffs is still nothing to sneeze at - he's definitely worth a closer look. As does Islander spark-plug Richard Park, who may be a far better bargain than both as he wasn't taking $2+ million to do what he does on the bottom two lines and the PK units.

Not that the non-1000+ drawers aren't impressive.  I was a fan of signing Manny Malhotra last summer and I hope this past season's numbers will justify continued fandom.  A 62.5% faceoff winning percentage definitely makes me smile. All 6 "significant minutes" centers had good faceoff percentages, nothing great but not bad.   None would be liabilities at the dot.   Down among the depth minute centers, Scott Nichol really stood out with 800+ faceoffs and a winning percentage above 60%.  That's more draws than Patrick Marleau, clearly he was trusted in his role in San Jose.

Overall, what strikes me is that only Dean McAmmond and Rickard Wallin really have noticeably low winning percentages.  At least Tomas Plekanec, Olli Jokinen, Glen Metropolit, and Matthew Lombardi were not too far under 50%, much less hanging around the 45% mark.   Most of the UFAs are coming off seasons where they did better than 50% on faceoffs, which I think is quite good. Should the Devils go into the market for a center, it wouldn't be a surprise if they win more faceoffs in 10-11.

Granted, faceoff totals and percentages aren't everything about a player; but they do provide insight into really was a center in the past season and whether the player can help his team get more possessions off faceoffs.  Not that faceoff dominance wins games, but getting the puck more often is always welcome.  It's not sexy, it's not usually celebrated, but it's an important part of the game.  Don't underestimate it.

Tomorrow, I'll begin by looking at each group more in-depth from this past season and if necessary, in prior seasons.

Now it's your turn.  Who on this list excites you?  Who's faceoff numbers impressed you?  Who surprised you? Vinny Prospal (he may be a winger/center, but his numbers surprised me a bit) certainly did.  How about the ages and salaries, did they cause you to think a little bit differently about a player?   Do you agree with the classification of these centers?    Let me know what you think in the comments.