Share All sharing options for: A Reason to Support Ilya Kovalchuk - The 2009-10 New Jersey Devils Roster by PDO

One of the big reasons I'm so interested in advanced statistics is because they provide a different perspective into a player's performance.    For example, we know that Ilya Kovalchuk is a goal scorer.  He's scored 338 goals in 631 games in his NHL career. This is simple.  But how impressive has been his performances? What can help explain his exceptional results?

Well, here's one way: his PDO is quite impressive.

What's PDO? Well, it doesn't stand for anything in particular, as far as I know; but it's meaning is real. PDO is the summation of a team's or a player's on-ice shooting percentage and on-ice save percentage at even strength (5-on-5) play.  What makes PDO stand out is that it can quickly show whether a team or player is above the base value of 1.  Higher is better, lower is worse, and that's simple.  More importantly, as Tyler Dellow found way back in 2008, is that it's usually an unsustainable value.  A team's or player's PDO will regress towards their true mean over time.  The exceptionally talented player will be able to maintain a PDO above 1 consistently.

Here's a fun example.  In 2008-09, several Boston Bruins posted some of the highest PDO's in the league, two in the top 10.  In 2009-10, no Bruins appear at all among top 100 players in PDO.  This suggests that they overachieved in 08-09; and that a reduction of total goal scoring should have been of no surprise.  Granted, the magnitude of the reduction was a bit of a shock to me. The Bruins crashed hard from the second highest GF/game average of 3.29 down to a 2.39 GF/game average, the lowest in the league in 09-10.    Still, PDO quickly showed what was up.

Behind the Net compiles these numbers season by season, only using 1000 as the base value (this is achieved by just multiplying each percentage by 100 and 1000, respectively).  I compiled the PDO of all the current New Jersey Devils roster - both signed and pending free agents - from the last three regular seasons.  (Again, the playoffs are so short, the low population size of games won't really say much.) The intent was to show who may be due to regress in 2010-11 and who should be expected to improve.  What I learned, among other things, was that Ilya Kovalchuk brings the offense. 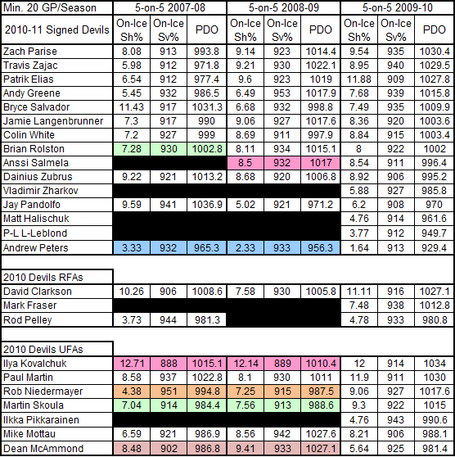 I took all the numbers from Behind the Net (NJ's team PDO: 2007-08, 2008-09, and 2009-10), filtering out those who have not played 20 games in each season.  Hence, the black bars for Rod Pelley, Mark Fraser, Matt Halischuk, Vladimir Zharkov, Pierre-Luc Letourneau-Leblond, and Ilkka Pikkarainen.   The colored cells highlight that the Devil finished their season for another team in those seasons: Kovalchuk in Atlanta, Rob Niedermayer with Anaheim, Dean McAmmond with Ottawa and the Islanders, Martin Skoula and Brian Rolston with Minnesota, Andrew Peters with Buffalo, and Anssi Salmela with Atlanta.

The first thing I noticed was Kovalchuk's PDO.  He managed to remain above the base of 1000 in all three seasons in spite of having some very poor goaltending behind him.  Why?  His on-ice shooting percentage of just over 12% maintained a relatively high PDO.  What's impressive is that the on-ice shooting percentage has remained that high in each season, so when Atlanta picked up Ondrej Pavalec and then went to New Jersey with the legendary Martin Brodeur behind him, the save percentage shot up to make his PDO even more impressive at 1034.

Kovalchuk finished 2009-10 with a higher PDO than any Devil, and with the knowledge of his prior two seasons in Atlanta, I'd go as far as to say that Ilya Kovalchuk's on-ice shooting percentage will likely remain to be that high.  Take this into consideration with his own total shooting percentage from season to season, and it's clear that Kovalchuk is a very special player.  He lights several lamps because he's such a great shooter and when he's on the ice, he contributes to his team's success in that regard.

No other Devil came close to touching Kovalchuk's even strength on-ice shooting percentage in any season with the exception of Paul Martin and Patrik Elias in 2009-10.  However, based on their prior two seasons, it's unlikely either will be able to maintain that on-ice shooting percentage.  Expect Martin and Elias to regress a bit next season regardless of where they would be.   Whoever signs Kovalchuk will reap the rewards of offense provided Kovalchuk stays healthy and continues to do what he does.

Incidentally, his on-ice shooting percentage of 12 was the 14th highest in the NHL in 2009-10.  If you want Kovalchuk to be re-signed in New Jersey, then this should be one of the big reasons why.  The Devils aren't going to get another player who can consistently perform this well in terms of shooting percentage so easily.  They won't see a value like that short of someone just having a unsustainably hot season. Even a very productive Zach Parise still only sees his on-ice shooting percentage below 10, albeit at a three-season high. Kovalchuk's PDO will remain above the base even with a terrible goaltender behind him.

Let's consider the other Devils in terms of PDO.  Among the signed players, I would expect Patrik Elias to suffer the most in terms of on-ice shooting percentage, I doubt he'll be able to maintain a value of 11% or something similar next season.  Unless he's next to two really great shooters.  Zach Parise could see a dip, but not a large one; his true mean may be around 9%.  His PDO may suffer more should the on-ice save percentage fall from 935, which is likely because an on-ice save percentage of 93.5% at even strength is absolutely ridiculous.  Andy Greene saw, unsurprisingly given the circumstances, a three-season high in on-ice shooting percentage but a more palatable on-ice save percentage.  I think his PDO may also slip as Greene regresses to the true mean - unless he truly is a late-bloomer.

Travis Zajac, Jamie Langenbrunner, Dainius Zubrus and Brian Rolston all took small hits to their on-ice shooting percentage and/or their total PDO. For the most part, the last three seasons suggest where their true mean would sit for future seasons.  Among the signed Devils, it wouldn't be too unreasonable expect them to maintain where they are.  This would be great for Zajac's and Langenbrunner's production, not so exciting for Zubrus and Rolston, though.

Of course, the big elephant in the room is that Langenbrunner and Rolston aren't getting any younger and a serious performance decline may be looming.  A great example of that can be seen with Jay Pandolfo.  We can say for certain that his last good season was 2007-08, and he's likely to remain below the base of 1000 for this final season of his deal.

Among the free agents, expect Paul Martin's on-ice shot percentage to drop but he should be able to maintain a good PDO value.  David Clarkson is tricky to figure out as he enters his fourth NHL season, I can't help but think that his actual mean in terms of on-ice shooting percentage and PDO will be lower than it was in 2009-10.   I believe Martin Skoula and Rob Niedermayer are due for big drops in 2010-11 as they hit three-season highs last season.  Mike Mottau and Dean McAmmond should see some increases by the same token, but probably not where they were in 2008-09.

Lastly, take a look at Andrew Peters.  His PDO in 2009-10 was the lowest in the entire league with this criteria, so he has nowhere to go but up.  Probably.

Let me know what you think of all of this.  Do you have a better opinion of Ilya Kovalchuk's talents through on-ice shooting percentage and PDO?  Do you have the same expectations of what will happen to either stat for these Devils?  Do you think the younger talents like Zajac and Parise will keep rising or maintain similar PDO values, or at least on-ice shooting percentage?    Knowing that PDO generally regresses towards the true mean, should the Devils target free agents that didn't necessarily have the best 09-10 in PDO but had better results in 07-08 or 08-09?  Or perhaps the Devils should take all of this with a grain of salt? Please leave your thoughts in the comments.