In 5-on-5 Penalties Drawn to Taken, New Jersey Devils Around Average over Last 3 Seasons

Share All sharing options for: In 5-on-5 Penalties Drawn to Taken, New Jersey Devils Around Average over Last 3 Seasons

In continuing to look at penalties drawn and penalties taken at 5-on-5, I looked at the past three seasons to determine how the New Jersey Devils as a whole combined in each.   I discovered that Zach Parise has drawn the most calls by far; that Bryce Salvador and David Clarkson "contributed" the most to taking calls among Devils who played from 2007-08 to 2009-10; and that the team had their best drawn/taken ratio in 2009-10, yet were involved in fewer total calls in the past three seasons.

However, that post didn't cover how the Devils have ranked among the rest of the league in terms of 5-on-5 non-coincidental penalties taken and drawn.  This post will.  As with yesterday's post, I pulled the penalties drawn and taken numbers from Behind the Net from the last three seasons for each team with the only criteria being a minimum of 1 TOI/60.  Behind the Net does not parse a player's numbers by team, so each team's numbers are based on the season results for each player.

From those numbers, I calculated the drawn to taken ratio (D/T ratio) for each team.  Ideally, I'd expect a team to at least draw as many calls as they take; but a major finding from looking at each team for three seasons was that drawing and taking penalties may not be repeatable.  In fact, the average for all 30 teams was below 1 in each season.    What follows after the jump are the findings from this analysis.

Here's every team's total penalties taken and drawn in each of the past three seasons in a table: 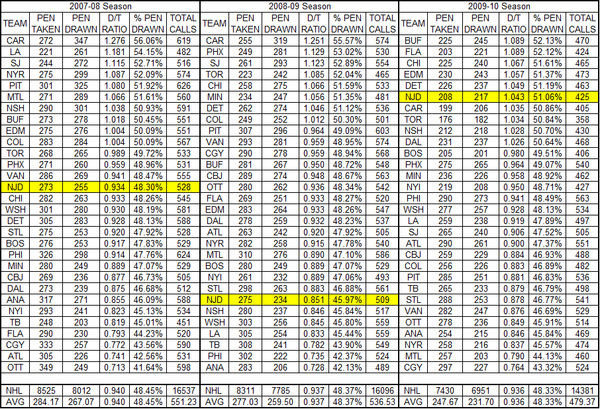 Please click here for the a larger version of his chart.

Again, I've organized each season by drawn/taken ratio.  While drawing calls by itself is a benefit, it's undercut if the player or team takes nearly as many calls.  Likewise, the damage from taking calls can be rationalized if the player or team also draws calls.  Ideally, you'd like a team to draw more than they take, so a ratio of 1 or better is desirable.

In fact, it appears the total and average number of calls involved in the league fell from season to season.  Is this the result of teams adapting to how the rules are called?  Perhaps the refs have let more play go on in more recent seasons?  Both? Something else entirely?

Clearly, the Devils really didn't seem to repeat their results with respect to penalties  from season to season except for generally not being involved in so many of them.  The Devils have consistently been in the top 10 in terms of fewest total calls; but there have been teams high drawn/taken ratios (e.g. Florida, Toronto, Carolina, and the Devils last season) as well as low drawn/taken ratios (e.g. Anaheim, the Islanders, and the Devils in 2008-09) who have had a relatively low amount of total calls involved in.   While it is very good to take as few penalties as possible, it's not helpful if it's joined by few drawn calls.

Looking at the ranks of each team at drawn/taken ratio by season show that very few teams have been consistent in this way:

Carolina fans can be proud that their team has consistently been on the good end of the drawn/taken ratio compared to the rest of the league at even strength. Toronto, Buffalo and Phoenix fans should also generally approve of their team's performance in terms of drawing calls compared to their team's taking of calls. St. Louis, Tampa Bay. and Anaheim (especially Anaheim) fans can justifiably gnash their teeth over their teams ranking on the wrong end of the drawn/taken ratio over and over in these past three seasons.

However, most of the league appears to have one or two relatively good seasons in terms of team drawn/taken ratio with the remaining seasons going awry.    Pittsburgh and San Jose, for example, were great in 2007-08 and 2008-09, but definitely suffered this past season.  In the same time frame, the New York Islanders had two relatively poor seasons followed by improvement in 2009-10.   In my opinion, this provides further evidence that maintaining any kind of drawn/taken ratio for multiple seasons is difficult.  Changes in the roster, changes among coaches, injuries and changes among players themselves may all account for such swings in the ratio.

Then again, Carolina alone provides evidence against that. Why are they so consistent at making sure their team has been so seemingly adept at drawing more calls in recent seasons?  Perhaps the Devils and a lot of other teams may want to take note if the organization or coaches stress something different with respect to discipline and intensity.

Combining all three seasons, it's just as the headline shows, the Devils are just average in terms of drawing and taking penalties.  Yes, they have had the third fewest total calls; but again, they're lower in drawing calls than at taking them and that ultimately hurts. 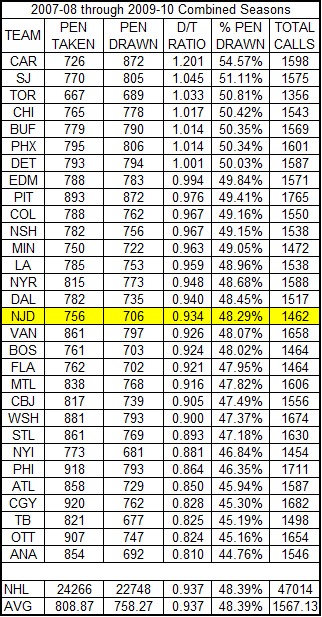 A list like this may dissuade some preconceptions about a team's reputation.  For all their truculence and overall season disappointments, Toronto was quite good at drawing more calls at even strength.  Even if you undid the Phaneuf trade, the Maple Leafs would be among the league's best.   Anaheim and Philadelphia fans may feel that they're being targeted (especially Philly, who's taken the second most calls total - but please look at the roster first, Flyers supporters before complaining); but maybe Ottawa, Calgary, Atlanta, and Tampa Bay fans may want to join them.   Despite having the two biggest names on their roster, Pittsburgh and Washington weren't close to a combined drawn/taken ratio of 1. Again, one star can't undo or prevent their teammates from being drawn into taking penalties.   Heck, Los Angeles has had the most prolific penalty drawer in the league over the last three seasons in Dustin Brown and they've ranked only thirteenth over the last three seasons.  Only in 2007-08 did they rank in the top 10.

Lastly, all the team's supporters of the drawn/taken ratio above 1 shouldn't complain about the NHL conspiring to go after their teams: this includes Detroit.  They've had the better of drawing calls, not taking them.

In any case, what do you think of the Devils when it comes to drawing or taking more calls. Why do you think they've fluctuated in terms of drawn/taken ratio from season to season?  Do you hope the new head coach will instill strategies so the Devils can draw more calls while remaining disciplined on their own end?  What did you think of the results from other teams?  Do you prefer that the Devils keep the total amount of calls involved in low regardless of how they broke down by drawn or taken at even strength?  Let me know what you think in the comments.