Share All sharing options for: How Good is Paul Martin? Part 3: Special Teams On-Ice Impact from 2008 through 2010

Earlier today, I posted up a With Or Without You Analysis of Paul Martin's 2009-10 season. It established Martin's impact on his teammates' Corsi percentage during 5-on-5 play with both goaltenders in the net.

A little later, Part 1 of How Good is Paul Martin? went live with an examination of Martin's 2008-09 season.  The analysis was focused on his even strength (5-on-5) on-ice impact in various micro-stats from Behind the Net. This included shots for per 60 (SF/60), shots against per 60 (SA/60), goals for per 60 (GF/60), and goals against per 60 (GA/60).  Martin's adjusted Corsi/60 (thanks to Derek Zona  was also calculated to determine how the Devils possessed the puck when he was on the ice.   In general, Martin showed to be one of the better defensemen in the entire league - even outperforming some "big name" defensemen in terms of on-ice impact.

Part 2 of How Good is Paul Martin? went live earlier this afternoon with the same approach, only for Paul Martin's injury-shortened 2009-10 season. While everything wasn't perfect, when Martin did play, he provided a significant impact to his team.

Those three posts, I think, make the case pretty well that Martin is a talented defenseman who has contributed plenty to the Devils with only a few exceptions.  Contributions that don't show up at all on a basic statline where you can see a player's points, plus-minus, and possibly minutes played.   However, those three posts only looked at his even strength play.  Paul Martin's contributions on special teams were ignored -until now.

This post utilizes the 5-on-4 and 4-on-5 stats collected at Behind the Net from both the 2008-09 and 2009-10 seasons.  Again, the goal here is to determine what Martin's impact was on the power play in terms of SF/60 and GF/60 as well as the penalty kill in terms of SA/60 and GA/60 when he stepped onto the ice.   Ideally, we'd want shots and goals to increase when Martin comes on the ice on a power play, yet we'd want the shots and goals to fall during a penalty kill.

The charts may be larger, but I've put them vertically by season to see how Martin ranked among his peers as well as to note any improvement or decline in each stat.  It's large, but putting them side to side wouldn't fit. Either way, please click on Wide before continuing after the jump so you can see as much as possible.

In Parts 1 and 2, I filtered the Behind the Net numbers to only show defensemen who have played a minimum of 20 games and had a minimum TOI/60 of 15.   On special teams, I kept the same minimum amount of games but reduced the TOI/60 to only 1.  This way I'm capturing all defensemen who were on secondary penalty kill and power play units from both seasons.    Here's how the population sizes worked out for each season.

2008-09: 127 defensemen fit this criteria for 5-on-4 power play situations.  Among these 127, only 2 Devils qualified: Martin and Andy Greene.  For 4-on-5 penalty killing situations, 187 defensemen fit the game and ice-time criteria.  Among the 187, 6 were Devils: Martin, Colin White, Bryce Salvador, Johnny Oduya, Niclas Havelid (mid-season acquisition), and Jay Leach.

2009-10: Only 118 defensemen fit the criteria for 5-on-4 power play situations; again, only Greene and Martin qualified among Devils within this group.   As for 4-on-5 penalty killing situations, 175 defensemen were filtered out from the numbers.  Five of these were Devils: Martin, White, Salvador, Mike Mottau, and Andy Greene.

As seen in both Parts 1 and 2, Paul Martin did not put up a lot of points in general.  In terms of the power play, Martin contributed 2 goals and 16 assists on all man advantages - most on New Jersey, tied for 34th  among defensemen in the NHL - in 2008-09.  In his shortened 2009-10, the contribution was only one goal and one assist (and it was the second most points on the team anyway).

Clearly, Jacques Lemaire definitely continued the practice of running 4 and sometimes 5 forward power plays from Brent Sutter. Therefore, Martin's power play points don't look so good.  However, a look at his GF/60 and SF/60 rates can indicate how much he's contributed. 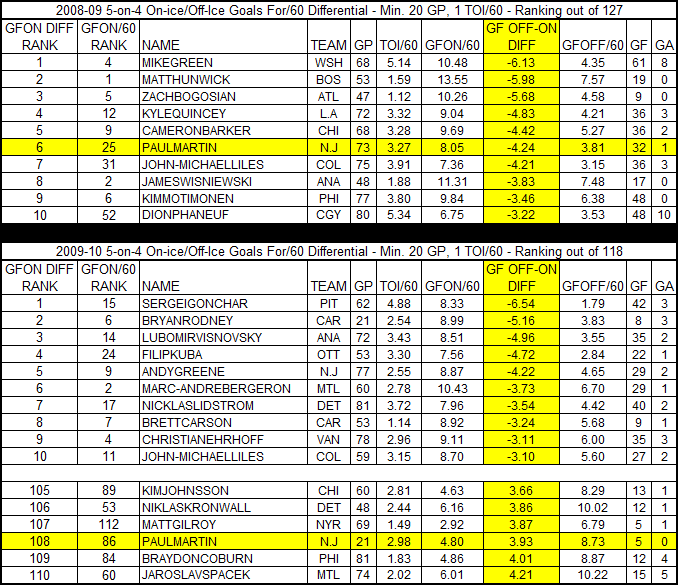 In 2008-09, Martin was not only the top Devils defenseman on the power play but he was among league leaders in GF/60 differential.  When Martin stepped onto the ice, the rate of goals shot up.  And his on-ice GF/60 wasn't too shabby, 25th out of 127.

However, in his injury-shortened 2009-10, Martin was clearly on the wrong side of this differential.  Andy Greene was much better if only for showing a beneficial on-ice impact.  When Martin stepped on the ice, the GF/60 dropped and by a good amount.   108th out of 118 is just outside of the worst defensemen in this differential, while his on-ice GF/60 ranked slightly better. 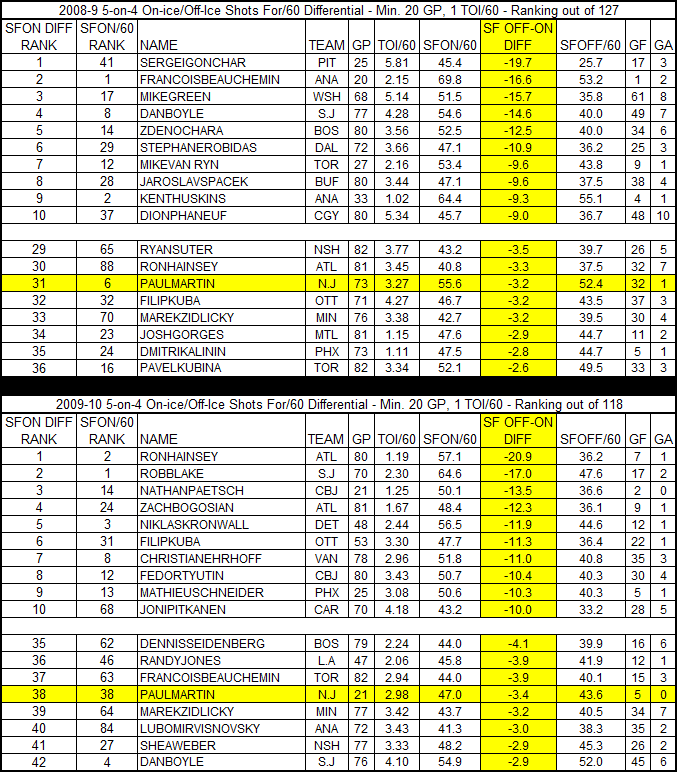 Martin won't be confused with being a power play ace anytime soon, but it appears that in both seasons the team's SF/60 rate improved when Martin came on the ice.  That suggests that he does contribute even if it's not productive on the scoresheet.   Unfortunately, it hasn't translated to goals.  While Martin's 2009-10 was shortened by injury, the GF/60 rate and the on-ice impact on that stat were much worse than it was in 2008-09.  Perhaps this was a result of factors outside of his control (e.g. players on ice with him couldn't score for various reasons). But it does suggest that as beneficial as the SF/60 increase was, it doesn't necessitate more goals.

Martin performs at the even strength level, but how about in 4-on-5 penalty killing situations? The situations where the defense feels the pressure, faces an opposition with every reason to play offensive hockey, and needs to be especially aware of attackers in open space and dangerous positions.   How does Martin being on the ice impact the team's SA/60 and GA/60?  Did they go down, suggesting a positive impact, or did they horribly increase? 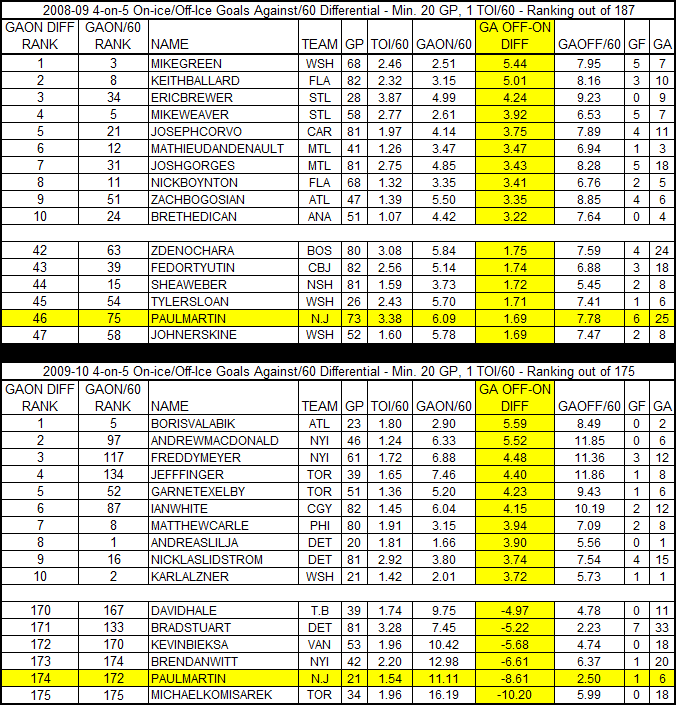 In 2008-09, Martin was quite alright.  The GA/60 dropped when he came on the ice by at least a goal, ranking 46th out of 187.  That's a pretty good differential.  In terms of GA/60 on its own, it wasn't as good but Martin's well above average with respect to his peers.  Among Devils, Martin led the team in both: Johnny Oduya came in second in GA/60 differential on the team with a 0.37 improvement, and Colin White was in second in terms of raw GA/60 at 6.34.

In 2009-10, well, Martin was terrible.  Not only dead last on his team, but nearly among all 175 defensemen analyzed.  His GA/60 differential was an astronomical increase, and the raw GA/60 was very high as-is.  Surprisingly, he was only on the ice for 6 goals against at 4-on-5 hockey so it wasn't as if every time he stepped on the ice, the Devils PK got blown up.  Still, no matter how you cut it, Martin's goals against per 60 rate on 4-on-5 situations was bad. 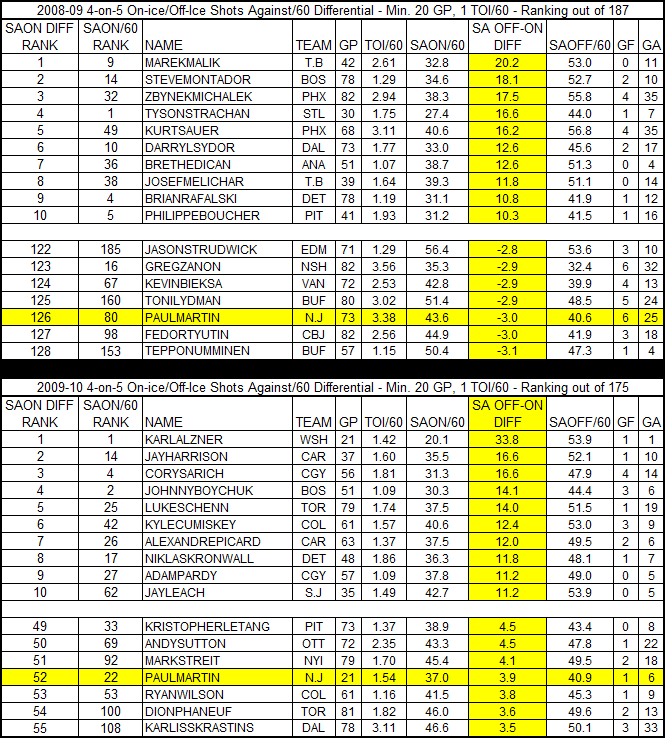 Amazingly, despite the big drop in goals against per 60 on PK, we see the reverse from season to season. In 2008-09, Martin's SA/60 on-ice impact wasn't that great.  The impact was negative as the opposition's shooting rate went up by 3 shots per 60.  It should be of no surprise that the differential ranked well below average. Plus, only Havelid had a worse differential among Devils - and he wasn't a Devil for the whole 2008-09 season.  Martin's on-ice SA/60 mitigates his 08-09 PK performance; it was above average at 43.6 and finished third behind Oduya and White.

In 2009-10, despite playing less (or because of it?), Martin's SA/60 on-ice impact became positive and just under 4 fewer shots per 60.  That ranks well among the 175 defensemen filtered out.  His on-ice SA/60 on its own was very good at 37.0, 22nd among all defensemen analyzed.  He wasn't the best on his team in either stat, which speaks well to some of the team's penalty killers.  Bryce Salvador (32.9, 5th) and Andy Greene (33.1, 7th) not only had a superior on-ice SA/60 to Martin but among the best among all defensemen filtered.  Greene (7.5, 22nd) and Salvador (7.0, 28th) also posted better differentials that Martin that also ranked highly among defensemen.

The combination of these two stats for Martin suggest that while Martin has provided a positive on-ice impact in terms of shot reduction on 4-on-5 penalty kills, the goals against was at a higher rate in 2009-10.   In 2008-09, the reality was switched: the goals against per 60 fell when Martin stepped on the ice, but rate of shots allowed went up.   Perhaps this suggests that the while more shots were allowed in 08-09, they weren't as dangerous so the goals against fell; and, so, the opposite occurred in 2009-10.   However, I can't help but think the real answer may involve more random chance than anything else.

So What Now? Conclusions Across All Three Parts

Taking the above into account to what was found in Part 1 and Part 2 regarding Martin's even strength performance, I'd say that Paul Martin has been a very good defenseman for the New Jersey Devils in both 2008-09 and 2009-10.

Out of the 18 stats from Behind the Net and calculated based on numbers from Behind the Net, only 5 were below average among defensemen who played a comparative amount of time.  One (the GF/60 in 08-09) was literally just below average, and three of those came in Martin's injury-shortened season.  Who knows how a full season would have changed Martin's own on-ice impact on special teams as well as even strength in 2009-10?  The stats that were high would have likely fell, but those that were low could have increased to a more respectable level.

Sure, his point totals won't wow you, he doesn't throw big hits, he doesn't rack up shot blocks, and he's not particularly big.  But you can't honestly say that Paul Martin's not a very good defenseman in this league, based on what he has contributed to New Jersey - in a full season or otherwise, at even strength or otherwise.  I believe these posts today show some insight into how valuable he really was as a defenseman in recent seasons; and that it'll be quite hard to replace him.

Thank You for Reading

As with Part 1 and Part 2, big thanks go to Behind the Net, where I pulled all of these numbers (and why the names are formatted FIRSTLAST) into Excel for comparison and chart-making purposes.   Above all, thank you for reading.  I hope this gives you a better idea of how Paul Martin did on special teams beyond the basic stat line.

Let me know what you think of this post. Was this clear enough?  Did this change your opinion of Paul Martin in any way now that a deeper look was made to his on-ice impact on special teams?   Why do you think his impact changed from both seasons, why they went down on some of his stats in 09-10?   Please leave your thoughts in the comments.

On Wednesday, I'll compare Martin's ranks in these stats to some of the other unrestricted free agent defensemen on the market.  If you still think Martin can be or should walk away this summer, fine; but we'll see if there are any defensemen who can contribute what Martin did in recent seasons.