Share All sharing options for: How Good is Paul Martin? Part 1: 2008-09 Analysis of His Even Strength Play

Paul Martin has become the top defenseman for the New Jersey Devils in recent seasons, leading the defense in both points and time on ice until this past season, where he missed 59 games due to a broken left arm.  Martin is one of the impending unrestricted free agents from New Jersey, so his return may not be guaranteed.  Initially, I felt the Devils should make every effort to keep Martin even over Ilya Kovalchuk.  However, how effective has Paul Martin been?  Where does he stack up with respect to the rest of the team?  Where does he stack up with respect to other defensemen?

I decided to take a closer look at Paul Martin's micro-stats from Behind the Net in addition to the basic stats at NHL.com.  I am focusing on even strength, 5-on-5 play, because that situation dominates most hockey games.  I understand that special teams are important, I will be covering that in a later post.

In addition to all this, I'm also looking at the micro-stats of defensemen who played at least 20 games and have a minimum time on ice per 60 of 15.  In 2008-09, there were 123 defensemen who fit this definition. This way I'll be comparing Paul Martin to other defensemen who have played significant minutes for their team when I post up Martin's own results.

This post is about Paul Martin's 2008-09 season.  It was the most recent "full" season Martin has played, where he was in 73 games. I will be doing a similar analysis for his 2009-10 season in the next post, so one could take a look at these results and determine whether or not he improved.  One final note, please set your viewing to Wide by clicking on "Wide" in the gray box next to the headline. This way you can see the entire charts.

When some people think of top defensemen, they think of someone like Zdeno Chara or Chris Pronger or Scott Niedermayer.  Someone who can throw a big hit, come up with a big shot block, be a threat at both ends of the rink, and contribute a lot of points for their team.   There's nothing wrong with any of that, but in my opinion, the most important contribution a defenseman can make for his team is to reduce the number of shots against.  Ultimately, a defenseman's positioning and decision making can prevent dangerous scoring chances, shots off rebounds, and just shots against in general.  The fewer shots the goalie has to face, the better.

To that end, let's see where Martin stacks up in terms of shots against per 60 differential.  Basically, how much do the shots against rate go down when Martin's on the ice and how does this compare with his peers in the league? 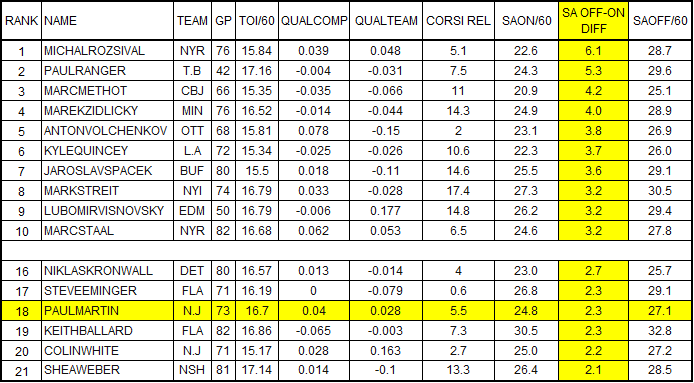 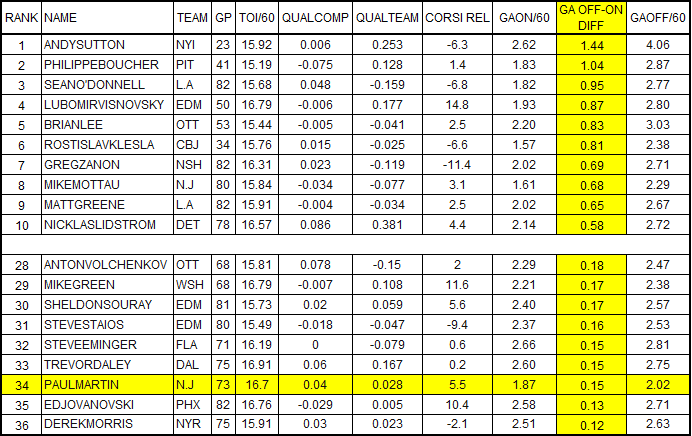 Incidentally, in looking at both on-ice/off-ice differentials, Martin's on-ice impact was larger than the impact brought out by, say, Chara (52nd in SADiff, 108th in GADiff), Pronger (33rd in SADiff, 75th in GADiff) and Niedermayer (59th in SADiff, 95th in GADiff).  This isn't to say that Martin was totally better than those three defensemen, just on these stats.  As you'll see, he can only wish he had the offensive skills of those three.

Paul Martin wasn't seen as an offensive defenseman, and just by points alone, you'd be right in saying so.

While Martin did lead the Devils in total points; he finished tied for 43rd in the NHL among defensemen in total points with 33.  In terms of even strength points (ESP), Martin's 14 put him tied for third on the Devils behind Johnny Oduya (23) and Colin White (15) and tied with Bryce Salvador (14).  Among the rest of the league, 14 even strength points put Martin tied for 81st among defensemen.  In terms of shots on goal, Martin finished one behind Oduya on the team and tied for 59th among all defensemen in the league.

Mind you, since Martin had the highest even strength time on ice on the Devils at 17:31, it wasn't as if he was the victim of playing behind anyone on the blueline.   I don't think anyone would seriously argue Martin was a high scoring defenseman.   Even when he stepped on the ice in 2008-09, the goals for per 60 did not increase too much.  It did increase, but only by 0.3 - a little more than half of the 123 defensemen in the league were ahead of Martin in this differential. 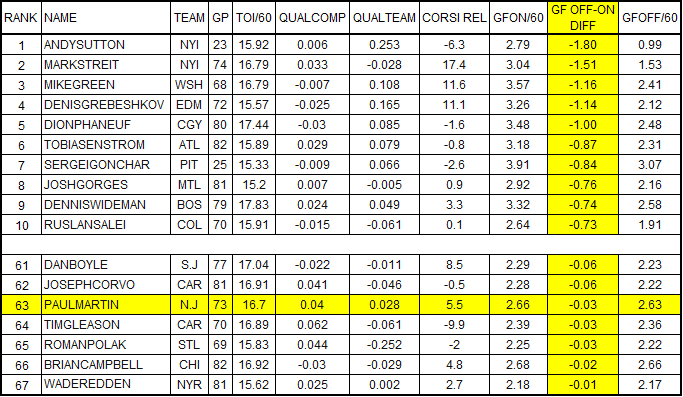 Bryce Salvador was the only Devils defenseman who had a worse off-ice/on-ice differential in terms of goals for per 60.  Despite playing with an above average quality of teammates in 08-09, when Martin jumped onto the ice it didn't lead to more goals at even strength.

However, Martin was much better in terms of shots for per 60 differential among the Devils and the rest of the league.  They didn't necessarily lead to more goals, but in general, it's a positive sign that there's some offensive contribution. 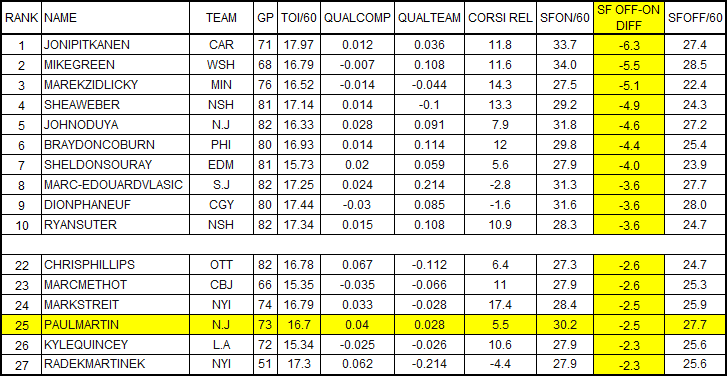 Not only is Martin among the top 25 defensemen in this regard, the shots for per 60 coming up over 30 when he stepped on the ice is among the top of the league as well.  Only 18 defensemen yielded a shots for per 60 of over 30 in 2008-09 (Martin is 16th among them).  Martin did not lead the Devils in this differential despite being one of the better defensemen in the league in this stat.  He came in second behind his partner Johnny Oduya was far more exceptional in this regard.

Martin did not shoot a lot of pucks on net, did not score a lot of goals, and did not contribute a lot of even strength points in 2008-09.  Chara (33rd in ESP, 50th in GFDiff)- just to continue my earlier example - was more productive in points and in GF/60 differential.  Pronger (39th in ESP, 93rd in GFDiff), and Niedermayer (21st in ESP, 105th in GFDiff) didn't achieve a higher GF/60 differential but contributed more points.    Interestingly, Martin outdid those three in shots for per 60 differential.   As a result I decided to look at adjusted Corsi/60.

Corsi is the summation of shots on goal, blocked shots, and missed shots when a player is on the ice.  It can be used to determine territorial dominance by a team since if a team is attempting to shoot, they are most likely in the other team's end of the rink.  However, Corsi requires context to be properly understood.   As Derek Zona showed at Copper & Blue, Corsi is inversely proportional to zone start - where a player starts on the ice.  This makes intuitive sense: it's easier to rack up Corsi events when starting in the opponent's zone than starting in your own.

I've asked Derek for some help and he showed me how to adjust Corsi with zone start.  Vic Ferrari did the work to determine how a player's Fenwick (shots on goal + missed shots) is affected by zone start at even strength; and JLikens expanded it to Corsi.  Since I've already looked at shots and goals both for and against per 60, looking at Paul Martin's Corsi from 08-09 can indicate how he contributed his team's puck possession when on the ice. Taking his zone starts into account gives a more accurate view of his own Corsi rate.

Following Derek's formulation, I was able to calculate the adjust Corsi/60 for all 123 defensemen.  Paul Martin's was easy to find.

While he wasn't a leader in shots for per 60 or shots against per 60 differentials (and definitely wasn't when it came to goals), Martin had one of the best adjusted Corsi rates in 2008-09 among defensemen.  Notice that some of the best defensemen in the game today were very strong in this stat.  After all, it tells us that their respective teams had the puck more often and did more with the puck than their opposition when they were on the ice.

Incidentally, Martin didn't lead the Devils in this stat; Oduya was just a bit better due to his higher Corsi On stat inspite of his slightly negative zone start rate (DZ-OZ = defensive zone - offensive zone).  In fact, two other partnerships were high on this chart as Rafalski-Lidstrom led in adjusted Corsi per 60 and Seabrook-Keith had a very high rate as well.

In 2008-09, it would be fair to say that Paul Martin was a very good defenseman.  He faced strong competition and within his own team he was a leader in a number of stats.  A closer look at his even strength differentials show that he wasn't always the best even on his own team.   Martin did have one of the higher SA/60 and SF/60 differentials in the NHL; but only in Corsi/60 does he rank in the top 10 among the rest of the league - and he still finished behind Oduya.

Still, I don't think Martin was so mediocre on offense as his point totals might indicate.  Over the course of a season, his own Corsi maintained one of the highest rates in the league.  Sure, he was often paired with Johnny Oduya who had a higher Corsi rate, one of the best SF/60 differentials, and more even strength points; but Martin had a higher quality of competition and a lower quality of teammates which leads me to think that Martin wasn't just riding Oduya's coattails.  If anything, I'd say the two combined worked well together to yield so many occurrences of puck possession.

Keeping that in mind along with his pretty good shots for per 60 differential, that Martin did contribute plenty to the Devils' attack in 2008-09 in addition to the defensive end of the ice.  Moreso than some of the bigger names in the league despite how many more points they had or their reputations. It's just that it was not easily seen just by point totals.   No, he's still not a point machine nor should he be expected to be one.

What does this have to do with now, given that it's 2010?  Again, this was the last full season Paul Martin played and as he goes into free agency, how he performed in 2008-09 cannot be ignored.   Is this the most complete analysis on Martin?  No.  Again, there's no special teams, penalties aren't mentioned until this parenthetical point (Martin was tied for 133rd among defensemen in PIM, third most on Devils), and I'm sure there are other ways to examine Martin's even strength performance in 08-09 that I didn't consider.

Thank You for Reading

Again, big thanks go to Behind the Net, where I pulled all of these numbers (and why the names are formatted FIRSTLAST) into Excel for comparison and chart-making purposes.  Large thanks to Derek for explaining the importance of Zone Start with respect to Corsi as well as the formulation to get an adjusted Corsi/60. Thanks to NHL.com for the basic stats like points and such.   Above all, thank you for reading.  I hope this gives you a better idea of how Paul Martin did in 2008-09 beyond the basic stat line.

Incidentally, I did save all of these differentials and adjusted Corsi/60 for all 123 defensemen.  I plan on highlighting the impending 2010 UFA defensemen for a future post, but if you'd like to know how a certain defenseman stacked up, just ask away in the comments.  I'll get to as many as I can read.

Let me know what you think of this post. Was this clear enough?  Did this change your opinion of Paul Martin in any way now that a deeper look was made into his 2008-09 season?   Did you come out of this thinking that Paul Martin was a good defenseman or not?  Please leave your thoughts in the comments.  In a few hours, you'll see something like this for 2009-10.