Share All sharing options for: A Closer Look at the 2009-10 New Jersey Devils' Penalty Kill

Yesterday, I broke down the New Jersey Devils' results on the power play (PP) and found it to be lacking after November and December 2009.  I immediately said the unit needed improvement, especially given how poor it was in the playoffs.  User qsurf99, raised the issue of the penalty kill (PK) in these two comments:

i think the bigger problem was that the penalty kill was absolutely HORRIBLE.

72% kill rate in the playoffs is completely unacceptable and was a much bigger concern to me than the power play.

the last few games were decent, but they made me very uneasy whenever someone went in he box all season long…especially in the playoffs.

A big reason why I didn't initially think about it was that the Devils' penalty killing units were quite successful going into the playoffs.  After all, some of the goals given up on the power play really couldn't have been prevented by anything more just somebody needing to pick up their man - not really a PK problem but a lapse in positioning.  And other power play goals allowed (e.g. the deflections) really couldn't be stopped by much more than just not taking the penalty to begin with - something I firmly believe as the best PK tactic. But if I took a look at the PP, it only stands I should look at the other side.  Maybe I missed something?

Today, I thought about this further and I'm openly wondering if I'm approaching this properly? Even bringing up the playoffs is a huge question. Yes, it's important but it's foolhardy to assume the 82 games played prior to it are meaningless.  Especially in light of the Capitals' first round choke job, where the NHL leading power play slumped hard by going 1-for-32 (yes, worse than New Jersey's power play).  Even more especially with this following quote Derek Zona put up just after the Game 7 loss by Washington.  Given that teams are built and tested in 82 games, knowing that the short-term can yield totally different results is a hard pill to swallow - especially given that contracts are usually for entire seasons, negotiated based on long-term performance, and so forth.

I suppose the big point is that when looking at any area of a team, be it a power play or a penalty kill, a long-term view must be taken if only because that's how to properly judge someone's worth as either a coach or a player.   A good run of form in the playoffs can easily mask mediocre seasons and may not even be repeatable.

In any case, now that I got that out of my head, I broke down the Devils' penalty killing results from NHL.com by month and calender year after the jump. 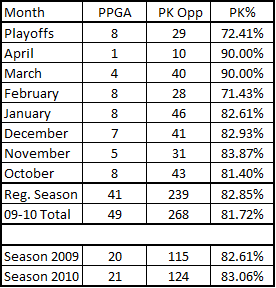 Here are some observations from the chart itself as well something I noticed while putting it together.

Ultimately, coming out of doing this breakdown, qsurf99 had a point - the PK could certainly use some improvement. While I don't think it's as important as improving the power play, improvement in this area would definitely help out in making it more consistently successful.

I was the most surprised that March and April improved the PK success rate only to about where it was before February. I thought it would be better, but apparently not.  Given the idea of how team performance can regress to the mean over time, well, after such a successful 21 games, that may be exactly what happened in those 5 games against the Flyers.  I still maintain that looking at those goals may tell a different tale in some cases, speaking better of the Flyers' own power play than the Devils' penalty kill; but it was what it was all the same.

The Devils' top penalty killers on defense were Mike Mottau and Colin White, who each averaged roughly 2:20 of shorthanded ice time per game (2:18 and 2:22, respectively).   Oddly enough, per Behind the Net's on-ice and off-ice numbers, White and Mottau's Qualcomp were lower than the two defensemen on the second unit: Bryce Salvador and Andy Greene.  And the shots against per 60 rose when they were out there; White saw an increase of 34.4 to 40.9, and Mottau saw an increase from 35.9 to 40.8. Then again, White and Mottau did play more than those two and the goals against per 60 dropped sharply with their presence; White saw a decrease from 7.05 to 4.72 and Mottau saw a drop of 6.74 to 5.64.  Paul Martin figured into the PK when he was available; but those four saw the bulk of the PK throughout the season.

As far as forwards go, there was more of a mix but Rob Niedermayer (2:05 SHTOI/game), Travis Zajac (1:48 SHTOI/game), and Jamie Langenbrunner (1:40 SHTOI/game) were generally out there. The fourth forward sometimes was Jay Pandolfo, then it became either Patrik Elias or Brian Rolston.   Rob Niedermayer faced the strongest competition among those three forwards, per Behind the Net, and like White and Mottau the shots against per 60 sharply increased when he was on the ice (32.8 to 47.1) but the goals against per 60 sharply fell (6.62 to 4.96) at the same time.

Interestingly, among all Devils who averaged a minute of shorthanded ice time in this past season, the save percentage happened to go up above 90% only when Niedermayer was out there.  Speaking of, if there's one mark that could be made on Martin Brodeur and Yann Danis is that the team's 4-on-5 save percentage was only 86%, per Behind the Net.  This was the seventh worst save percentage in those situations, but even more interestingly, the teams below of them were Philadelphia, Washington, Dallas, Toronto, Nashville, and the New York Islanders - all teams who finished in the bottom third in overall penalty killing success rate except for Philadelphia.

One More Thing for a Conclusion

Derek Zona of the Copper & Blue suggested this post by JLikens at Objective NHL as something that tied in with the power play post I did yesterday on special teams repeatability.  I believe it would apply here just as well.  Here's the main conclusion:

Not surprisingly, both PP S% and PK SV% are less ability driven than the other three variables. It's worth noting that PK SV% appears to be more reliable than PP S%. I presume that this can be attributed to the influence of the goaltender on PK SV%.

Therefore, assuming I understand this correctly, to improve the penalty kill, the Devils should be looking for players who excel at preventing shots.  Paul Martin has certainly done that at the even strength level and were he healthy for a full season, that alone could improve matters - possibly regardless if Mike Mottau sticks around.

Likewise, if this summer sees Rob Niedermayer going to other teams or possibly calling it a career, then his replacement should clearly be a checking center.  Not necessarily someone who's been a part of a successful PK, but, ideally, someone who plays against strong competition and has a positive effect on shots against per 60 when he's on the ice.  This way his PK role will be appropriately replaced instead of hoping Travis Zajac or Jamie Langenbrunner can continue on without a hitch.  Assuming the 4-on-5 penalty killing save percentage doesn't improve (and a quick look at 2008-09 and 2007-08 suggests it might? 90.1% was the best in 07-08; 85.9% in 08-09 was far from it), then it stands that shot prevention is even more important.   This can be done through multiple means, puck possession, smart positioning, an appropriate scheme set in place by the scheme, and/or understanding the other team's power play.  All can contribute to getting that important stop more consistently.

I still think that the best way to kill a penalty remains to not take a call to begin with.  Still, when it happens, the Devils could be better prepared in that regard. Hopefully, Lou and the organization already is aware of this when looking at potential signings.