I already gave my thoughts on how the Ilya Kovalchuk trade was justified, showed why I don't think Martin Brodeur was at fault for the postseason, and how the Devils' defense doesn't immediately look as bad as some may think.  Therefore, today's a good time to look at an actual problem from the New Jersey Devils' 2009-10 season that needs to be addressed: the power play.

Yes, the Devils' power play success rate finished the season at 18.7%, which isn't all that bad, really.  It was good enough to finish eleventh overall in the NHL.  However, a little digging into the team's power play numbers and you'll find that it's not as rosy at it appears.  The Devils finished 26th in power play opportunities with 273 and tied for 21st with Atlanta with only 51 power play goals scored.  No Devil finished with more than 10 power play goals: Zach Parise led the team with 9. The percentage looks good, but the underlying numbers are found lacking.  For context, the Capitals led the league in this past season in success rate (25.2%) and power play goals (72).  Again, the issue isn't the rate, it's the gross.

In the playoffs, it was dire - the Devils finished 4-for-32 on all man advantages and were woefully inconsistent from chance to chance.  As of this writing (6:40 PM EDT on April 28), only three teams have had a worse power play: Nashville (1-for-27), Washington (1-for-30), and Buffalo (0-for-19). It's no coincedence that a faulty power play helped the early demise of the Devils, Sabres, and Predators as well as why the Capitals are facing a crucial Game 7 against the Montreal Canadiens.

While the Caps are a good example of a great power play going bad at the wrong time, a solid power play would still be of a great benefit for the Devils. No, it won't guarantee playoff success.  Just ask the LA Kings about that.  Yet, I feel it's definitely worth improving.  A more proficient power play would keep opponents more honest, it would help the Devils win some games they'd otherwise lose, win some games by a larger margin, and help them turn momentum within a game more often.  All of that would definitely help. Something the Devils could have definitely used against Philadelphia.   I broke down the numbers by month, calender year, and by Ilya Kovalchuk's arrival to learn a little more after the jump. 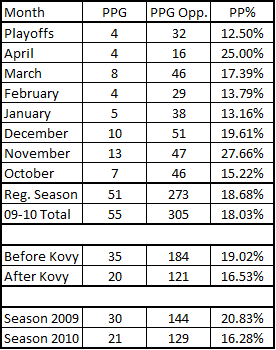 I think it stands out on it's own.  Here's some quick observations and some additional things I found by compiling every game's power play goals/opportunities.

So those were the stats.  What can be changed for 2010-11 in the hopes of having a more consistent and fruitful power play?  Here's a few suggestions.

Coaching.  In retrospect, having Ilya Kovalchuk play entire power plays didn't make them more successful.  But it's not up to Kovalchuk to decide his own ice time - that's on the coach.  It's also on the coach to design the plays on the power play, to select the personnel for each unit, and to have them practice their approaches.  While the Devils did a lot of practicing, the results in games were mixed.  Aggressive penalty kills were effective against NJ and coaching adjustments weren't made - especially in the playoffs - to account for that.  I don't know whether Jacques Lemaire was running the power play; but whoever it was, they didn't do as well as possible.

Of course, Lemaire retired so a new head coach is coming and presumably he'll have an assistant or two in mind who could take care of the power play if he's not going to do it himself.  I would hope Lou will make the power play an important focus during the interview process.

An Offensive/Two-Way Defenseman.  Lemaire liked to put 4 forwards out for the power play.  Given that he was without Paul Martin for most of the season, Andy Greene remained as the only defenseman with any offensive acumen (or, Johnny Oduya played himself off the PP).  Even so, since the Devils' defense has been lacking in offensive production last season, the signing of another offensive or two-way defenseman could provide a boost from the point.  This can allow another forward to go on a second unit, which could improve that group and balance out the attack.

Another Power Forward?  You know Dainius Zubrus is pretty much a power forward - he's big, he knows how to use his size effectively, he can handle himself well in a cycle, and he's got good hands to set other Devils up or take a shot himself in space.  David Clarkson knows how to make things a little chaotic, but he's not really there yet. Maybe next season, assuming someone tells him to watch Tomas Holmstrom and do what he does?  Maybe a second power forward, preferably a center, can augment the power play further instead of Clarkson if he's not ready.

A Different Identity for Each Unit. This is something controlled by coaching and personnel. Ilya Kovalchuk, Brian Rolston, and Jamie Langenbrunner all have pretty good-to-great slap shots.  They can fire it hard from the point.  Having those three across two units lends the PP to stay in an umbrella format.  While the umbrella isn't bad on it's own, an opposition PK who is prepared for it knows how to defend it or at least make it difficult for the pointman to hit the net with their shot.  Especially if each unit still tries to screen the goalie with two wings down low to collect longer rebounds/missed shots.

We know that Zach Parise is excellent down low around the crease. We know that Patrik Elias can be an excellent distributor.  We know Brian Rolston, if nothing else, still has a strong shot (and had 7 PPGs last season, third on the team).  We know Dainius Zubrus can screen goalies and win pucks along the boards.  And so on.  Ultimately, the PP is almost like a puzzle - if the coach can figure out who meshes well with who, a strategy can come together.  Sticking ZZ Pops with one or two other forwards didn't work. The next

If the first unit is in an umbrella but the second unit tends to play an overload or positional style on the PP, that will keep the PK units guessing a little bit and take them out of their comfort zone.  Of course, this may require keeping the two units consistent; but depending on who's kept and who's brought in, it could be made successful.

Those are some of the ideas I can immediately come up with for the PP improvement. Ultimately, I think whoever the new coach will be will have the largest impact in terms of improvement or possible regression. Let me know what you think in the comments about the Devils' power play and offer your suggestions to improve it.