Share All sharing options for: Solid Bluelines: Even Strength Stats of the New Jersey Devils' and Philadelphia Flyers' Defensemen

Tomorrow, the first round of the 2010 Stanley Cup Playoffs will begin, and the New Jersey Devils will host the Philadelphia Flyers in the first game of their series.  Today, there's plenty out there in terms of series previews and analysis.

I plan to have a more "focused" preview based on what I think the New Jersey Devils need to do to succeed up later today. However, I think what warrants mentioning are the defenses for both teams.  They're pretty good.  As a team, they are among the top 5 in the league in terms of shots allowed per game.  The Flyers have the stud defenseman, the name, in Chris Pronger.  The Devils don't have as much of a heralded defense but Devils fans and those who look at the numbers know effective they have been in 2009-10 - even while Paul Martin missed most of the season.

I decided to take a closer look, compiling the even strength on-ice and off-ice numbers for shots against and goals against per 60 from Behind the Net.  I focused on defensemen who are still on their team's active roster while having played at least 20 games this season. That explains why Martin Skoula is here and not Danny Syvret.  Here's the even strength numbers source for New Jersey and Philadelphia in case you want to explore further.  Now enjoy this chart after the jump. 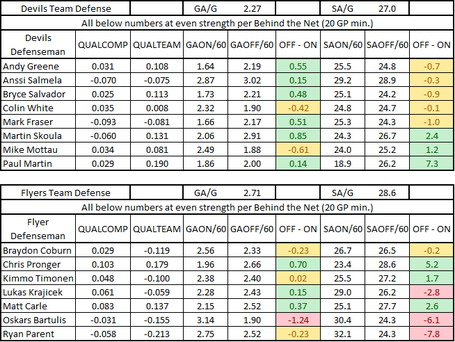 1)  Among these defensemen, don't expect Anssi Salmela or Mark Fraser for New Jersey to start.  Only Fraser's been rotated into the lineup recently but at the expense of a regular defenseman getting rest.  As for the Flyers, Oskars Bartulis hasn't played recently - his last game was on April 2.  It's probably for the best since he stuck out the most at even strength for poor numbers.

2)  Chris Pronger isn't just the "Big Name" with a "Reputation" to "Throw Elbows," when he was on the ice for Philly, he got the job done.   The goals against and shots against rates significantly drop.  Sure, Paul Martin's difference on shots against was larger, but Pronger has accomplished these numbers across 82 games, not 21 like Martin.  No wonder he averaged a total of 25:55 of ice time.  Expect to see him out there against the Devils a lot.

Clearly, it's to the Devils benefit to strike hard when he's off the ice - especially against Ryan Parent/Bartulis should either play.  It would be great if they could get him off the ice when he's on the ice.  That is, draw some calls on him.  It's not that far-fetched of an idea as he took 32 minors in this past season, the second most on the Flyers.   Think about it, Devils. Especially you, Zach.

3) Well, if you don't know much about the Devils defense, then this chart should sum it up for you: the whole is the greater of the sum of their parts.  Only Colin White and Mike Mottau saw an increase in goals against per 60 when they come on the ice, but that's not as terrible as you may think when you consider that they've came across the toughest opposition.    In terms of shots against, the rest of the blueline is more varied; but when the biggest "liability" was the rate going up by a shot when Mark Fraser stepped on the ice for a shift, you know it's been a very solid group.

4) But if you so badly need a name on New Jersey's defense, here's what you need to know to impress people at parties: Paul Martin. He's healthy.  He's back  He is for real.

5) As far as an "underrated" defender goes, consider Martin Skoula.  He was used mostly as a depth defenseman earlier in the season in Pittsburgh and basically played his way off the team.  In New Jersey, however, he's been quite solid whilst averaging 18:36 with the team.  Jacques Lemaire knows what Skoula can do and it's been clear that Skoula wants to and has been making the most of the opportunity given to him as a Devil.

Most of all, it doesn't seem clear to me that either defense is going to make a huge impact should both bluelines play like they have been all season.   I don't believe either is significantly better than the other.  The Flyers' top defensemen play as well as you would expect, whereas the Devils have been quite good from top to bottom.   What I do believe is that which team breaks first from what they've done in their own zone will be at a serious disadvantage.   I suppose that's why much discussion and concern has been made about the goaltending matchup, since no defense can play perfectly.

Who would you rather have behind a solid defense?

Let me know your thoughts about this even strength breakdown of both team's bluelines in the comments.