Yesterday, sales representatives of the New Jersey Devils could be found throughout the concourses of the Rock with ticket information for the 2010-11 season.  Invoices were mailed out to current season ticket holders; I got mine yesterday.   The New Jersey Devils' official website has all of the pertinent information up now.   While the plans are phrased as "Frozen Over," that's not a reference for the ticket prices.   Compared to this season's prices, they've actually went up a bit.

Last year, when the 2009-10 ticket prices were released, I found that the Devils significantly cut prices throughout most of the arena.   My initial reaction to these prices was that the Devils are "tinkering."  This is understandable, as they need to find the right price that will draw fans to buy tickets but at the same time make them as much money as possible.  This shouldn't be news as this has always been a professional hockey team.

That said, I can certainly understand why some fans could be or will be upset about this.  The New Jersey economy hasn't really got back to where it once was; so price increases are especially undesirable.  For example, according to NJ.com, some people are very upset over fare hikes on NJTransit lines.  Granted, the Devils aren't increasing prices by 25% and people don't rely on Devils hockey like they might on mass transit; but I get the sense that a lot of the anger is over the fact that fares are just increasing when times are tough.  I get that. Going back to the Devils, while none of the ticket increases are over $6 - at the box office or for season tickets - compared to this season's prices, I can see why some would be unhappy about this development.

Let's see how much they've went up and what other incentives the Devils are offering for the 2010-11 season.

Note: I will be referring to the sections in the Rock by their color, as defined by the team here.  If you're curious how it's set up this season, please check out the map on this page at the Devils' website.  That all said, here are the 2010-11 prices side by side with the 2009-10 prices. 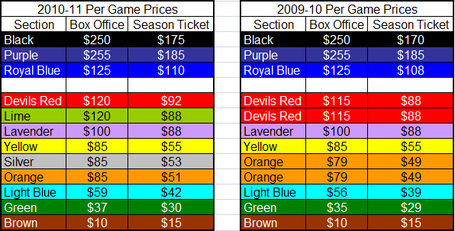 Here's a second chart detailing the increases in prices: 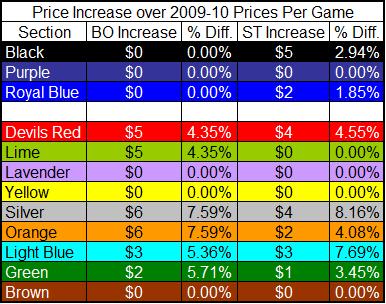 From a nominal standpoint, I maintain my stance that ticket prices have increased slightly.  The largest increases are at the box office for the Orange and the new Silver sections and it's only $6 more.  Season ticket prices are still significantly cheaper than the box office prices outside of the Brown sections - the $10 gameday ticket prices.

The upper bowl sections saw relatively little increases in nominal price. I should the percent differences above are with respect to the 2009-10 prices.  The Light Blue sections are going to be  higher percentage increase than the Devils Red, Royal Blue, or Black sections since the 2009-10 price was that much smaller in the first place. The upper bowl center sections on the side - the Yellow and Lavender sections - remain the same price.  Premium (Black and Royal Blue or Club/Front Row and Goal Bar seats respectively) and lower bowl seats have seen the larger nominal increases, the latter due to two newly defined sections.

The new sections were the first thing I noticed when I got the 2010-11 ticket information: Lime and Silver.  In the lower bowl ends and corners for this season, there were two sections: Orange and Devils Red.  The Orange sections ran from rows 11 through 23; and Devils Red ran from rows 2 through 10. Now, Lime represents half of the old Devils red section, rows 6 through 10; as well as the upper half of the lower sides, rows 16 through 23. The Lime section keeps the old Devils Red season ticket price of $88.   The new Devils Red section are now rows 2 through 5 in the ends and corners and rows 2 through 15 on the lower sides.  The new Orange section is now rows 16 though 23 in the ends and corners; and the Silver section represents rows 11 through 15 in those same sections.

Honestly, I don't understand why there are two new sections?  Why split up the lower ends, corners, and sides like this?  For some, this is meaningless.  If you were already in the Devils Red section with a season ticket and your seat is part of the new Lime section, then you'll pay the same price as you did last season.  But if you are still in the new Devils Red sections or are in the new Silver sections, you'll be paying more than people with comparative views in nearby rows.  I'll admit that they are great seats and I'll concede that they are still good value for the view you get, but is it enough to charge an additional $4 per game for a season ticket?   I sit right behind the Silver section; the guy in front of me is going to be really confused why he's paying $53 per game when he's practically got the same view I have at $51 per game.  He's got a legitimate reason to not be pleased about that.

But the Devils are hoping across the board, that fans won't mind. And maybe they won't.  After all, a beer at the Rock costs more than any of these increases - both at the box office and for season ticket plans. Hence, my usage of the word "slightly" in the headline.   From my own experience, when I saw that my season tickets are going up by $2 per game, I wasn't angry.  I wasn't bothered.  My exact reaction was,"Oh. Well, still cheaper than 2008-09."  I still plan on re-upping my own seats for another season; I'm already spending over $2,000, an additional $82 isn't really much of a concern.

That's my situation, and the Devils are hoping that there most will react like I do and renew without complaint.  But I fully understand that your situation may be completely different.  Hence, I sense there will be some unhappy fans about the rise in prices - mostly lower bowl season ticket holders, I would imagine.   Those reliant on the box office probably aren't pleased either.  Perhaps  the Devils are trying to convince more of them to fill the upper bowl as those seats didn't go up too much at the box office.

I should note that you don't have to renew or purchase season tickets in one big payment. The Devils are offering two payment plans, a four-monthly plan running from April 17, 2010 through July 17, 2010 and a new twelve-month plan from April 17, 2010 to March 17, 2010.  That could alleviate some concern over the increased ticket prices for current and potential season ticket holders.

Like last season, The Devils have highlighted four incentives, a list of potential prizes chosen at random, as well as a super prize drawing for those who renew or purchase season tickets by April 17, 2010.  Here are the four incentives:

Now that fourth one is brand new. The Devils currently have nothing but closed practices at the AmeriHealth Pavilion (the Devils' practice rink).  I can't help but think that this is being done as an experiment to see how much interest there would be for some open practices, how the team can handle the crowd, and how the team would respond to fans watching them.  Personally, I have no problem with practices being closed if only so the team can focus on their game plan, drills, and other tactics without a crowd overseeing everything and sharing their opinions on what's going on.   If the fans can behave, the players and coaches can do their job, and interest is good, then the Devils have reason to continue doing this or expand it.  If not, then they can always go back to closed practices.

The super prize drawing and the list of guaranteed prizes are back.  I thought the super prize drawing was a great idea last year, and it still is a grand idea because there are some serious prizes being offered.  Why not renew early if you have the chance at a trip to LA for the NHL Draft; a helicopter ride and four tickets to a Devils vs. Rangers game at MSG; an autographed team jersey; or eating lunch with either Doc, Chico, or Dano?  The Super Prizes will be drawn daily starting from April 1, which is odd because the drawings end on April 17 and there are 15 (not 17) prizes.  I guess Sundays won't count?  There are also additional prizes being offered where the season ticket buyer ranks their top 10 choices out of 22.  These have varying appeal, not as huge as the Super Prizes - but there could be multiple winners for these prizes, like for the 30-second LED ring message at a game.  The full list of both prize opportunities are up at the official web site.

I'm glad that the Devils continued the Super Prize and additional prize for season ticket holders, and I'm really intrigued that they're going to invite people to a closed practice or pre-game skate.   Maybe it's a sign that they're opening up a bit more to the fans?  Still, the team did increase prices by a bit and that's going to stick out like a sore thumb more than anything else.  I don't think they are large increases.  Nominally, they aren't. However, some will justifiably be upset over increases in general - and I understand that, just let the Devils know that politely is my only suggestion.

Let me know what you think about the 2010-11 Devils' ticket prices.  How do you feel about the increases?  Do you think the incentives and prize drawings are enough to get Devils fans to renew/purchase season tickets before April 17?  If you are a season ticket holder or are just thinking about getting them, what do you plan to do for next season?  Share your thoughts in the comments.