Expect this list to get larger. The Lowell Devils are currently third in the Atlantic Division with 80 points. While it's not a lock, they are in a good position for the AHL affiliate to finally make the playoffs after a long drought.  Very impressive considering Lowell has had a rookie head coach, John MacLean, saw a number of key players brought up throughout their season to fill in for injuries on New Jersey (e.g. Vladimir Zharkov), and injuries within the team (e.g. Jeff Frazee, Matt Halischuk).  The Trenton Devils, on the other hand, are eleventh in a twelve-team American Conference in the ECHL.  The playoffs aren't likely going to happen for the AA-league team.

Why highlight it? Well, it is more experience for the prospects, which is always good. It also gives the scouts some evidence to see how the players show up in important, pressure-filled games.  That they were part of a successful team when younger might - emphasis on might - translate to knowing what it takes to succeed at a higher level.

After the jump, I've compiled the individual stats for all of the Devils prospects on Hockey Future's top 20 prospect list as well as a few other notable minor-league prospects and the rest of the 2009 draft class.

Here's the stats for the top 20 prospects on HF's list for the Devils: 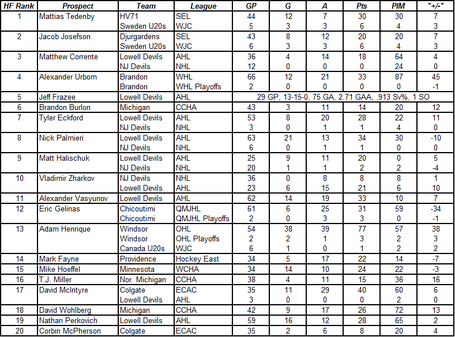 Here's the stats for other notable prospects: 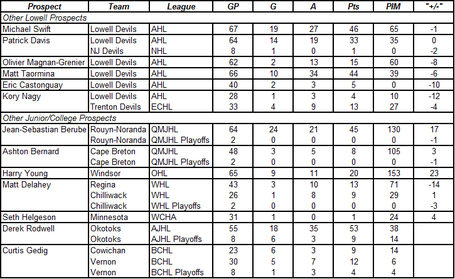 I'll probably make one more update when everyone's season has ended.  Maybe the numbers aren't eye-popping, but given that 4 on the top 20 (and one who hasn't) have already tasted the NHL, Zharkov has remained with the New Jersey organization, and the ones with the highest potential are getting valuable time in the post season; it's not a bad group of prospects on paper.

Let me know what you think in the comments.  If you have seen any of these players play, please, by all means, tell us how you think so we all know what's out there.