Share All sharing options for: The Last 30 Days in Second Period Performances by the New Jersey Devils

I noticed from the post-game coverage on MSG+, that the second period was a talking point for the loss.  Along with the losses in general, it certainly is a concern for the Devils.  But how bad has it really been?  Is this a more recent phenomenon?  Is there a common trait across some of these second period performances?

So what I did is that I took a look at the last 30 days of games.   Since January 8, the New Jersey Devils have played 16 games. Their record in those games is poor: 6-9-1. The last time they strung two wins together was just after the loss to Tampa Bay: January 9 in Montreal and the shootout win on January 12 at MSG.   To me, that's clear evidence that the Devils have really been in an extended slump for a while.  In this range of games, I felt that the Devils have "achieved" a diverse set of losses, but I wanted to see whether or not the second period has been a particular problem prior to last week. 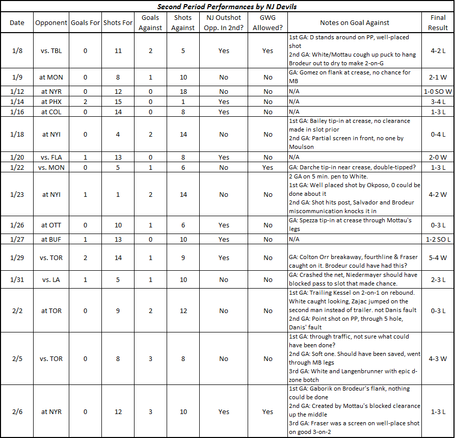 Apologies for the big chart and the smallish text on the notes (you can click on it to enlarge the chart), but I really do think it speaks for itself.  As a quick conclusion to the big question, it appears that it has been a more recent problem than anything else.   Only three eventual game winning goals out of the 10 losses were given up in the second period. In several of these losses, including all three shutout losses, the eventual winner was conceded in the first period. This suggests that the Devils were put into a hole to deep to climb themselves out of, for a variety of reasons.  Any goals conceded basically added to the Devils woes would ensure losses more than cause them.

Here are some other quick tidbits I found out while looking all this up:

So I wouldn't suggest that the Devils need to especially focused in the second period.  It's not where they have lost most of these games.  Until this past week, it hasn't been that noticeable of a problem.  If anything, it's only a part of their slump. Over the last 16 games, the losses truly have come in many different ways from giving up too much early (e.g. the 3-1 loss to Colorado), not coming out to play well at all (all three shutout losses), and making bad mistakes in the third period (e.g. the 4-3 loss to Phoenix, the 3-2 loss to LA).   It isn't the second period that has been dooming them throughout this slump, but lapses on defense in other periods and struggles in just scoring goals in general are more directly related to most, if not all of these losses.  The second period performances does, in my opinion, compound the problem - New Jersey's not scoring much in them and they've allowed too many to ensure losses than to lose the game entirely in them.

Again, the old cliche appears to apply again: it's a 60 minute game and a less than 60 minute effort will cost a team the game. The Devils need to improve not just in how they play in the second period, but also in their general performances by each individual player.  Lemaire and the assistants can strategize as much as they want, but they aren't on the ice - the players themselves need to make it happen on the ice.  Only then, can they really put this slump to bed.  They have four games left for this month, let's hope the players and coaches can sort it out by tomorrow.