I really enjoy focusing on the prospects in the New Jersey Devils organization, but ultimately I am left to watch these players on grainy AHL streams or trying to research video and information from sources that see them first-hand.  When the Devils announced that their minor league hockey affiliates would be playing a total of five games in Atlantic City at the Boardwalk Hall, it was literally a 'jackpot' for me.  Devils hockey?  Check.  Gambling?  Check.  Easy driving distance from my home?  Check.

I went down to Atlantic City in an unofficial InLouWeTrust capacity to see the Albany Devils face the Adirondack Phantoms, a Philadelphia Flyers affiliate.  Luckily, I also have an affinity for gambling so I was able to acquire a complimentary room at the lovely Caesar's Casino right next to Boardwalk Hall.  As someone who used to (briefly) work in the minor league baseball world, I was psyched to get a chance to see minor league hockey for the first time.  More importantly it was an opportunity to see the Albany Devils in action, live.  After the jump I will give you my opinion on a few of the Devils prospects, the overall game experience and provide some photographs and videos that were taken at the game.   Spoiler alert, the Devils won 4-2. (Weird seeing Devils and win in the same sentence, isn't it?) 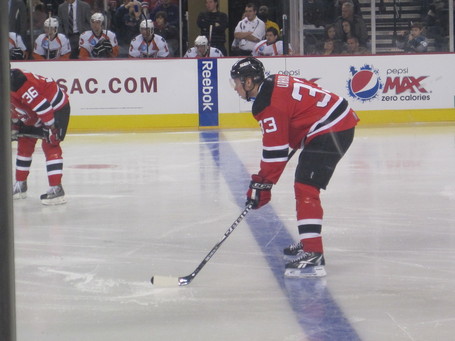 (33) Alexander Urbom, ready for a neutral zone draw against the Adirondack Phantoms.

Now, geography will tell you that there would be a number of Flyers faithful cheering on their team.  I would say that it looked like a 40% Devils/60% Flyers/Phantoms split among the rooting interest of the fans. At least that was my impression. The game summary claims that there were 5134 in attendance and I was impressed by the turnout (despite the Flyer fans).  That said, I think it could have been a bit better.

Besides the initial announcement back in September, I felt that these events weren't promoted as well as they could have considering you had two groups that would benefit from attendance, the Devils and the Harrah's hotel chain. As I mentioned one of my vices is gambling and I am a Total Rewards member of Harrah's. I received one email about the games, and even as a Total Rewards member I was only able to get a 'preferred' rate when purchasing tickets to all five games held at Boardwalk Hall. Now I know that casinos don't like to give away tickets to events that result in patrons NOT gambling for 2.5 hours, but why not send me an email when I made hotel reservations back in October to solicit the game? Why did I not get any correspondance from the NJ Devils about the games? The Devils could have also helped market the games by working with Caesars to offer discounted or free rooms to fans who purchased tickets. What about a team-sponsored bus ride from the Rock to AC for the game? Maybe I am nitpicking but I feel there were a lot of marketing opportunities that could have helped both Harrah's and the Devils.

It wasn't the prettiest hockey but the game featured two teams that gave solid efforts for 60 minutes. There are no future superstars at this level for either club, but many future contributors for their parent clubs.

That aside, there were some other small items that could have been handled a bit better. For example as soon as I got into the arena I immediately looked for a program stand to buy a program, and I had to search around before realizing they would be sold at the merchandising counter. I then realized that this was the stock program and didn't have an updated lineup sheet to account for roster changes. I know most of the players' numbers by heart, but I assume casual fans don't.

As I mentioned earlier this was my first minor league hockey game so I was very curious about the fan experience. To me, it seemed like a regular hockey game.  There is nothing wrong with that, but to the family of four who is frugally managing their entertainment budget.   I was expecting some shirts shot out of cannons, hijinxs with the 'Devil Dawg' and the crowd, etc. Just more.

Now this might be the typical experience when you go to Albany, so I invite anyone who attends games on a regular basis to post comments on any in-game activities. This was something I had also noticed when watching games via the AHL stream. Minor league baseball teams ensure that each half inning end (which typically lasts 90 seconds) is filled with something to keep the fans engaged. Granted hockey should be a more engaging sport to watch than baseball, but realize the casual fan can easily be bored by sloppy neutral zone play and long periods without any sustained pressure in the offensive zone by either team. 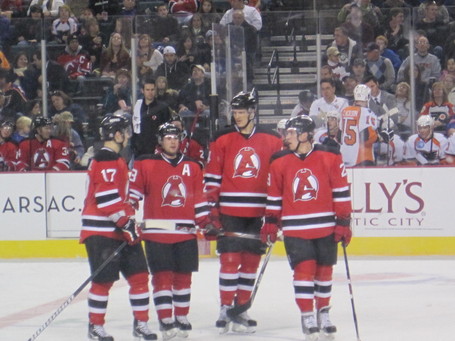 Despite having Tyler Eckford and Patrick Davis scratched for the game, beat 4-2 behind two goals from Trevor Kell, and one goal each from Nick Palmieri and Adam Henrique.  Jeff Frazee, relatively untested in the first period and a half, stood on his head in the latter stages of the second period and at various points in the third.  The Devils didn't have as much of a sustained attack in the offensive zone as you would have liked and their goals resulted from forced turnovers in the Phantoms defensive zone or goals off a rush.  Their power play -ranked 29th in the league- did generate some opportunities, but wasn’t that impressive. So while it wasn't pretty, it was still a win.

The best part of being able to attend the game was getting to see some of the prospects I had only read about or saw through video.  Here are my brief scouting reports on a few that I tried to focus on:

A few weeks ago I watched some Albany games via AHLLive and I wanted to give Henrique some more time to adjust to the AHL before relaying any opinion on him.  I am glad I waited.  After a rough start to the season resulting in only 4 points (3g-1a) in 14 games, 18 shots and an even rating, he has picked up his play substantially with 9 points (4g-5a) in his last 10 games, 33 shots and a plus 2 rating. His shot totals tell the story as he is contributing much more on the offensive side of the ice.  Right now he is currently 23rd among AHL rookies in scoring, but I have a feeling he is going to quickly shoot up that list.

Watching him live, I was very impressed with his instincts and awareness on the ice.  Now back at his natural center position between Matt Anderson and Vladimir Zharkov (#CallUpZharky) he looks much better than he did a month ago.  He was always cognizant of his defensive positioning and you got the impression that if the opposition is going to score while he is on the ice, they are going to have to work for it.  Playing on both the PK and PP units he is often on the ice in crucial spots for the Devils.  I tracked his ice time in the third period of the game as I was curious as to how much he was playing.  I guesstimate that he played about 4:30-5:00 minutes during the third period.  It would have been a bit longer but the Albany penalty kill was so effective that his unit would clear the puck within 15-20 seconds after being on the ice and would quickly change for a fresh unit.

I didn't expect to write about Harry Young when I went to the game. Young, a former 7th round pick in 2008, won't jump out at you in the stat sheet and as a defensive minded defenseman he often gets lost in the shuffle of all of the defensive prospects that the Devils have.  In 19 games he has a total of 4 points (1g-3a) and 21 shots on goal with a plus 2 rating.  What impressed me about Young was the way he played the game.  Physical without taking dumb penalties.   Always the first to stand up for teammates on the ice and willing to drop the gloves in their place.  Maybe it's the fact that I knew he had ‘intangible' attributes because he was the Windsor captain in the OHL or maybe it's because the NHL Devils haven't played with much heart this year, but I enjoyed watching him play.  I do know this:  With less than five minutes to play, Albany coach Rich Kowalsky felt confident enough in Young that he sent him out there on the penalty killing unit to help close out the game.  I think it's also important to highlight that (while he did play about six minutes in the third period) Alexander Urbom was not one of the defenders that was rotated in the penalty killing at all on Sunday night.  Should he ever make it to the NHL level I can't even fathom the mancrush Ken Daneyko would have on him.

I know, I am on Team McIntyre, you knew I would talk about him.  You should just accept it.

From recent games I have watched he was often on a line with Louis Robatille and Nathan Perkovitch, kind of a mini-crash line. He tends to bounce around to different lines during the game.  He did help generate the second goal of the game (scored by Nick Palmieri) that put Albany up 2-0.   McIntyre aggressively forechecked the Phantoms defensemen, getting the puck lose and putting it on goal for Palmieri to put back an easy rebound.   He backchecks very well, and was another player (like Harry Young) who would be on the ice late in the third period.  Logging a little less than 4:30 in the third period (that including a penalty which kept him off the ice) he seemed to get a bit more time when it 'counted'.   His lines didn't generate a lot of offensive zone puck possession time, but I would like to see how he would handle playing with a Zharkov or a Anderson to get a sense of the level of offensive talent that he has.

Beyond those three players no one else really jumped out at me as having a noticable game.  Frazee played well, but also let in some soft goals, Urbom looked real good at times but got deked out of his skates at other times and forwards like Palmieri and Zharkov didn't generate much activity in the offensive zone.  They both, however, did play solid defense.

So that was my experience at the Albany game.   I tried to upload some video I took, but the program didn't interface well with my camera, but don't worry all you really missed was PL3 beating on a Phantom.

So where you at the game on Sunday?   Are you planning on attending one of the games in Atlantic City that Albany or Trenton are playing?  If not, why?