Yesterday, I went into detail on how bad the New Jersey Devils have performed in the second period so far this season. While I was getting the numbers from the game summaries at NHL.com, I figured I'd take a look at the first and third periods. We know that the second period has largely sucked for the Devils this season. How do the other two periods look? Are the Devils really shooting more when they are going into the final period of regulation behind in the game? How about the beginning of the game? Are there any differences between months or different scoring situations at the start of the period?

I'm mainly looking at goals scored and shots on net for each period. Again, while it's a simple look, I think it will uncover some additional harsh realities with this squad. As if the title didn't give one of them away (which you probably knew since, hey, the Devils aren't even averaging 2 goals per game right now). If you're interested, please continue after the jump.

The First Periods of the 2010-11 New Jersey Devils 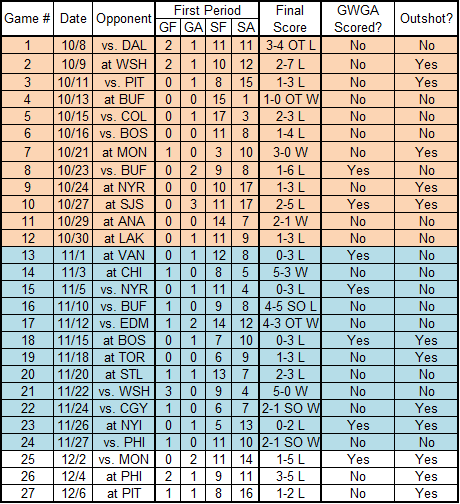 Here are some quick points that I discovered while putting this chart together.

Overall, the Devils have been outscored in the first period 17-21 but have out-shot their opponents 269-256. Given that the three blowout losses (10/23 vs. Buffalo, 10/27 at San Jose, 12/2 vs. Montreal) combined to put up 8 goals in the first period, it's not as bad as it looks. Though, after breaking it down by situation and month, I would argue it's not so good either. 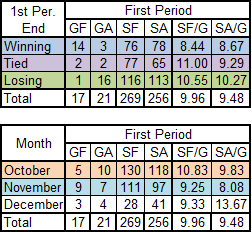 It should surprise no one that when the period ends with the Devils leading that they are heavily outscoring their opposition and vice versa when the period ends with the Devils losing. What should be surprising are the shooting rates between the two situations. It suggests that the period is more controlled when the Devils do lead. It may be only a weak suggestion, we will know better with more games. Still, it shocked me to see how big the shots per game for the first period jumped from Devils-winning to Devils-losing. A positive to take from the situations chart is that they've been outshooting the opposition when it's tied. That's good. That builds some momentum and establishes who's doing more with the puck. Too bad it hasn't consistently carried over into the second period, where the Devils have been put to the proverbial sword so many times this season.

The monthly breakdown isn't as generous. While the overall total is a positive shot differential with a not-groan-worthy goal differential, December has been unkind early. Whereas the Devils managed +12 and +14 shot differentials in the first two months, they've been pounded in their first three games this month to a -18 differential. Ouch. While 4 goals against may not seem like a lot, it's a higher rate of goals allowed than the other two months. Hopefully the Devils reverse these rates in their next few games. Otherwise, you may see a headline of "Slow Starters: The Woeful First Periods of the New Jersey Devils" in mid-January 2011.

At least the Devils managed to outscore opponents in the first period in November. It's the only time I've found across all three periods where the Devils actually outscore the opposition.

The Third Periods of the 2010-11 New Jersey Devils 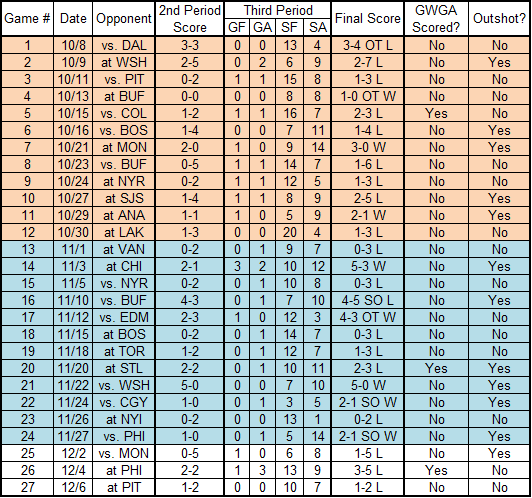 As with the first period chart, here's are some additional findings:

But as we know, trying hard and $1 will buy you something at the dollar store. Here's how it breaks down by end of second period situation and month: 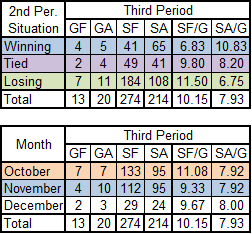 Let's talk about situation first. The shooting numbers don't surprise me for winning situations. If the opposition is losing, they're going to take whatever steps possible to score and that means more shots. That's fine. What's not so fine are the goals. The Devils have only scored in third period twice when they were winning: 3 goals in the 11/3 win over Chicago and 1 in their 10/21 win over Montreal. Twice, they allowed the equalizer but only came out with wins in the shootout (11/24 to Calgary, 11/26 to Philadelphia). In the rare case of the Devils winning after two, they need to make a point of it to get an additional goal. Unfortunately, with the team shooting as poorly as they are, that's asking a lot.

The situation when tied is a mixed blessing. Yes, the Devils have out-shot the opposition and that's good for a tied situation. Being outscored 2-4, not so much; though those 4 goals against came in eventual losses (11/20 at St. Louis, 12/5 at Philadelphia). Where the Devils are losing after two, the Devils have repeatedly turned up the effort. A shot differential of +76 is, well, amazing. It's just as amazing that out of 184 shots, they only scored 7 times - a horrid and hopefully unsustainable 3.8%. Because the Devils have been the more prolific shooters in the tied and losing situations, the shot differential for third periods are heavy in New Jersey's favor. Still, this has not (yet?) led to more goals, so it's nothing to really celebrate.

An Attempt to Tie it All Together Overall

Here's the summary of this post and yesterday's post. The Devils aren't too bad in the first period, the Devils tend to look a lot better in the third period in terms of shooting, and that's because the Devils are usually ravaged in the second period. Given the the widespread scoring slump on the Devils - something so bad that Jonathon Willis was bewildered at the numbers in this post at Houses of the Hockey - it is a combination that is primed for losing hockey games.

Is it getting any better as time goes on? This was essentially the question David of Talking Red asked me. Here's a summation of the three charts broken down by month.

November was an improvement on the scoring front, though the shooting went down for both the Devils (not as good) and the opposition (which is good). Current trends are awful, but I'm hoping that it's more due to the fact that December is 3 games old and with more games, there will be some improvement.

So what can the Devils do about this? Clearly, they need to cut down the number of times they enter the third period losing. This way they aren't in too deep and they spend the last 20 minutes bombing away to no avail yet again this season. The Devils would be helped out by having more positive first and second period efforts. In the rare case they enter the second or third periods leading, it should be a priority to keep up the attack to get a second (or even a third) goal. This way even if/when the opposition starts blitzing, the Devils at least have a buffer.

It's all so easy to say, but difficult to do. With Lou's pronouncement that John MacLean is the head coach and the team we have seen will be the team we will see going forward today, it's imperative that they make some changes to their performance should they want to win some games. While it may not necessarily lead to more goals, the Devils absolutely need to be sharper in the second period at a minimum. If it means trapping and slowing the game down to a crawl, then do it. If it means keeping it close to . If there's not going to be a personnel change, then it's on the current staff and players to make whatever adjustments they need to improve their lot in each of the three periods. What's been going on has not been acceptable, and so it should not continue.

I hope it doesn't. If the current coaching staff or the player leadership does not figure out how to address these issues and allow these trends to continue, then there will be even more losses and more reasons to change either the coach or leadership (or both).

Now, I've made my case. Does this back up what you've seen out of the first and third periods this season? What, besides score more goals, would you like to see them improve in both periods? Do you think the current coaching staff and players can make improvements in either of these two periods along with the second period? Please leave your answers and other thoughts about this subject in the comments. Thanks for reading.