A day after a debacle of a loss is a good time to pay a little attention to the future of the New Jersey Devils. Below you will find statistics for all of the Devils prospects playing in Albany, Trenton, Canadian Major Juniors and the NCAA. You will notice I condensed the list and deleted what I consider non-prospect players.  If you think I have deleted someone with NHL potential let me know in the comments section. Stats and more after the jump. 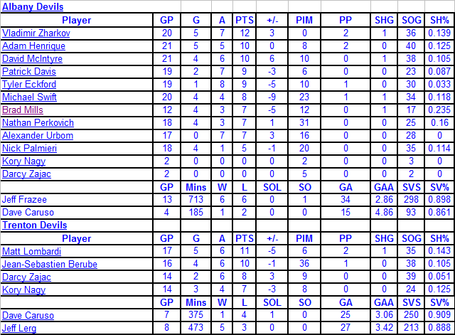 I will have a more detailed Albany update next week after I go to the game vs. Adrinoack on Sunday, but watching some recent games via AHLLive.com I have noticed some positive developments with the play of Adam Henrique and Patrick Davis.  It will also be interesting to see Darcy Zajac live after reading Brad Schlossman's opinion on him here.

Mike Hoeffel has recently earned the WCHA’s offensive player of the week award, with four even strength goals in one weekend of play.  Hoeffel is ranked 20th in the WCHA in scoring and 13th in goals scored.

In the CCHA, Brandon Burlon (3rd), Jon Merrill (5th) and Curtis Gedig (9th) all are currently ranked within the top 10 for scoring by a defenseman.   Merrill and Gedig are also the CCHA’s two highest scoring Freshman defensemen.

Plenty of updates on Scott Wedgewood in my recent links post here.  Both Clermont and Gelinas were invited and played in the Subway Super Series Challenge against Russia.