As most are probably aware, Devils defensive prospect Jon Merrill was named to the US World Junior National Team that won its debut outing 3-2 over Finland last night.  John wrote up a post on the subject here and I added some of my comments there but will reiterate them below.

To me, this is a huge positive for the organization and after the poor drafting history from 1999-2005 and the lack of high level talent drafted in 2006/2007, the Devils have been able to finally inject some life into the developmental system with players like Merrill and Mattias Tedenby.

Participation in the WJC isn’t fully indicative of future success (Bob McKenzie pointed out on Twitter that Logan Couture never played in the WJC) as some players may develop later than others. But having players like Jacob Josefson, Tedenby and now Merrill participating in the tournament-and playing prominent roles on their teams- the  development system might be back on the upswing after many lean years.

With the likely addition of a top 5 or 10 overall pick next year, Merrill, Tedenby and others added to the talents of Ilya Kovalchuk and Zach Parise, the future doesn’t look as bleak as the present.

After the jump, updated stats on all the Devils main prospects.

Not much activity in college hockey due to winter breaks.  The only active player right now is Merrill, who is playing for Team USA in Buffalo and notched an assist on the USA's first goal of the tournament. 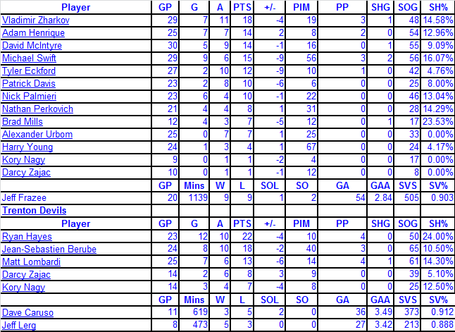 Clermont has been productive over the last few weeks picking up 3 wins to 0 losses. Gelinas continues to add to his point totals with 23 total points over 31 games.   Note that the QMJHL, which Clermont and Gelinas are a part of, has it's trade period from December 19th through January 6th.  Neither player has been traded yet, but there are some QMJHL rumour sites that speculate Gelinas might be moved.