The Recent Success of the New Jersey Devils Power Play

Share All sharing options for: The Recent Success of the New Jersey Devils Power Play

The New Jersey Devils halted their longest losing streak of the season (5 games) with last night's victory over the Phoenix Coyotes. Here is John's recap of the game. It was the closest to a textbook Devils win one could have witnessed so far this season. Martin Brodeur made some stellar saves with an active defense in front of him to get his third shutout of the season and his 113th of his career. The penalty kill was once again perfect during all three short handed events, further continuing a positive streak. The Devils continue their stretch of not allowing a powerplay goal in 5 games (19 attempts), and in their last 10 games have allowed only 2 powerplay goals on 32 attempts (94%).

Another streak that has continued, which also stands at five games is on the powerplay. The Devils have scored at least a powerplay goal since their meeting in Philadelphia against the Flyers. Since then the Devils are 7 for 20 at 35%. Previously, the Devils were a treacherous 7 for 74 at 9.4%. The 14 for 94 they stand currently is good for 14.9%. That's some transformation to equal the amount of goals on the man advantage in the last five five games compared to the first 25.

So what has changed during the powerplay? How has it changed? Who has been contributing? Are the goals the type of powerplay goals you would expect, or is it some phenomena like the Devils shooting percentage this year? This is a summary of the recent powerplay success for the Devils. Please continue after the jump.

Over the past five games, Head Coach John MacLean and his coaching staff (most likely Adam Oates) have kept together both powerplay units. If it works, don't change it. One interesting factor is that these lines feature all forwards. Compared to previous games, this is a difference.  Another is Ilya Kovalchuk playing most of the usual 2 minute minor powerplay, thus being on both units. This has been a constant ever since he was traded to New Jersey last season.

The first unit features Kovalchuck with Travis Zajac and/or Patrik Elias at the top. Jamie Langenbrunner is usually placed at a sharp angle, with Zajac or Elias mirroring him. Dainus Zubrus and his 6'5" 225lbs frame is exactly where it should be: Right in front of the net screening the opposing goalie. The second unit again sees Kovalchuk but with Brian Rolston and/or Jason Arnott along the blue line. Mattias Tedenby is at the sharp angle and David Clarkson is in front of the net. These two units take up the majority of the powerplay time. Near the end, MacLean will use the occasional defenseman or even 4th liner to get ready for 5-on-5 play.

I have to say both of these lines feature roughly the same type of variables. Kovy has that great shot, as we all saw last night, so being at the point being set up for one timers is perfectly fine for both units. Elias and Zajac have great passing abilities to set up Kovalchuk. Elias has shown recently his shot can be deadly when given the chance. Langenbrunner has the ability to chase down wide shots in the corners and get it back to the point man. Zubrus, along with the his great jumping ability, can fight for position when the puck is being passed cross ice along the point.

Rolston and Arnott have effective shots as well, and Kovy has been the play maker on this unit. Both of their shots aren't as good as Kovy's, but it seems to be a strategy the coaching staff is using. Let the opposing PK unit see Kovy take shots on the first PP unit, then see the second PK unit overplay his shot to see Arnott and Rolston getting shots. Tedenby is quick enough to gather those loose pucks but may have trouble winning battles along the boards even on the powerplay. Clarkson may not have Zubrus' frame, but he can be very pesky near the net. 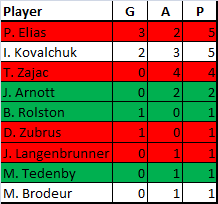 The top five players all play the point for the most part. Note: this doesn't mean all their point(s) were from the back end. The first unit consisting of Elias and Kovalchuk has really been on a tear, with Zajac being the prime play maker (all four of Zajac points were primary assists). Note again not one defensemen has tallied a point. It's hard when barely any of them get playing time on the man advantage.

The next chart is a breakdown of all seven goals scored during this duration: (Location Illustration)

A few notes: The late goal at Philadelphia was during a 6-on-4. The shot that was blocked on Rolston's goal came from Zone 7, the rebound from Zone 3. The 0:08 Time Into PP was the start of the 5-on-3 powerplay.

Four of the seven goals have been off of one timers. Both of Kovalchuk's and Zubrus' goals were in Zone 7, 8, 9, which is pretty far from the net. The fact they were one timers and all cross ice initial passes makes it difficult for the opposing goalie to set his angle for the shot. Four of the seven goals came quickly after the Devils had to start outside the offensive zone and through the neutral zone. The past struggle of initially getting into the zone on the man advantage seems to be moot now. A quick reaction: Yay!

One thing I noticed was how quickly the goals were scored into the powerplay. The average time on goals is just above the quarter make (for a 2 minute minor) at 31.8 seconds. This is why most of the first line is getting the points, because they are always the first unit. Both of Kovalchuk's goals were extremely quick. The first goal occurred right after he was set up for a one-timer, but a bouncing puck left the zone and the Devils were forced to regroup. It then led to this:

Another type of quick goal just as the team was coming into the zone was Rolston's rebound from Arnott's shot. Tedenby was able to skate into the zone, go around the net, and make a one-time pass to Arnott that looked to be partially blocked/deflected and right to Rolston (right in the chops too...owe).  Here's the video:

Elias' quick goal against the Ottawa Senators where Marty tallied an assist is the same concept. He skated right into the zone, the opposing defense gave him a nice shooting lane, and he wristed one off the glove of Pascal Leclaire that trickled in.

Are these the type of powerplay goals you would want? Not really. Fans and I'm certain the coaches too want to see the team set up with some passing and ultimately a goal. Here's a good example off of a face-off. The Devils won the faceoff and 20 seconds later:

Kovalchuk's second power play goal during this duration was last night, exactly 8 seconds after the 5-on-3 started. The Devils won the face-off, and a few passes later, Kovy blasted one home. This I'm fine with. Winning the face-off is key, and if the Devils are able to set up quickly, which they did and make those passes to set up for a Kovalchuk or Kovalchuk-type goal, then that's just taking care of business early.

Overall, the Devils have scored goals a few different ways on the powerplay. They are able to get into the zone easier during this stretch than in the past, which has created goals. They have won face-offs in the offensive zone that have led to goals as well. Most of the shots have been from along the blue line or behind the circles between Zones 7, 8, 9 and 10. Elias' last minute goal on the 6-on-4 and Rolston's rebound are the exception. With the personnel on the ice, it going to be these type of goals. Zubrus and Clarkson will use their ability to screen and deflect shots. Everyone else is really a shooter.

I have to give John Maclean credit. Before this stretch, he was using one or even two defensemen on the man advantage. Andy Greene or Henrik Tallinder would usually be at the point with 4 forwards. With how dismal the play has been before five games ago, Maclean and Co. have adjusted accordingly and it has payed off. He's putting the shooters in shooting position and the big men in better position.

The only areas where I see the team struggling on the powerplay is off of missed shots or deflections and rebounds. The Devils haven't be able to get to loose pucks as quickly as they should and set things back up. It usually leads to a clear or a bad pass that leads to the clear. The deflections are mostly luck based. Rebounds is where the Devils could make their powerplay turn from surging to automatic. I would like to see the players on outside sharp angles make their way to the net after a shot. The more men by the net off a rebound will result in better changes closer to the net.

So what's your opinion on the recent powerplay? Do you like the lines? Do you like their s"hooting from the point "mentality? What do you think can be done to make it better/continue to capitalize at this rate? Let everyone know in the comments. Thanks for reading.