Looking at the Point Totals by the Devils Defensemen vs. the Rest of the NHL

Share All sharing options for: Looking at the Point Totals by the Devils Defensemen vs. the Rest of the NHL

In a recent post I argued that part of the reason that Ilya Kovalchuk has struggled so far this season was because of the lack of offensive talent on the Devils blue line. I utilized the Goals Versus Threshold statistic and compared the 2009-2010 production of Thrashers defensemen vs. Devils defensemen and showed that playing with the likes of Tobias Enstrom, Ron Hainsey and Pavel Kubina helped keep the pressure off Kovalchuk in the offensive zone.

We all should realize that the Devils defensemen are not the most offensively gifted group in the league, but I was curious about the production of the Devils defense as a group compared to the rest of the league. Since we are about 5 periods past the 1/3 point in the season I took a look at each team's point production, shots and shooting percentage thus far in the season. Be warned, it's pretty bad. Please note that since the Devils use a five forward attack on the power play, I only utilized even strength points and shots.

The statistical results got me curious so I also wanted to figure out how much of their salary cap the Devils allocated to their defensive players. You will see how the old adage 'You get what you pay for' applies after the jump.

The Devils rankings vs. the rest of the league is:  24th in Shooting Percentage, 23rd in Total Shots, tied for 27th in total goals last in points and assists. No, you are reading it correctly. The even strength production for the Devils is in the bottom third in the league in all of the categories I looked at, dead last in a few.  18 points for the entire defense in the first 29 games. I had hoped that after adjusting the defensive stats and removing power play points and shots the Devils wouldn't look that bad, but the adjustments didn't make the numbers any less underwhelming. 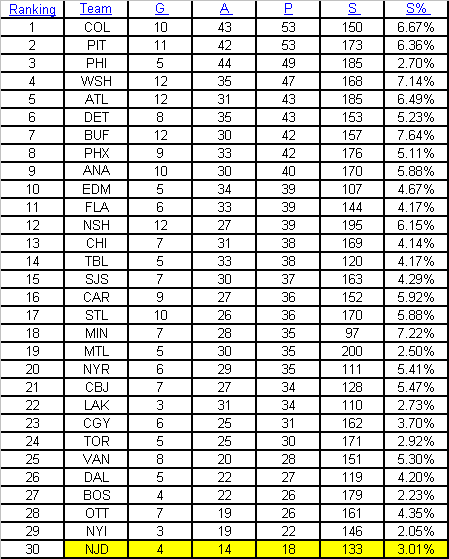 (The table above was sorted for total points.)

I was actually schocked that for both even strength shots and shooting percentage, (a better sense is provided by the table below) they were 23rd and 24th respectively. Since I have constant nightmares of point shots by Mark Fayne, Colin White and Andy Greene, etc being easily blocked by the opposition, it was surprising they weren't dead last there. 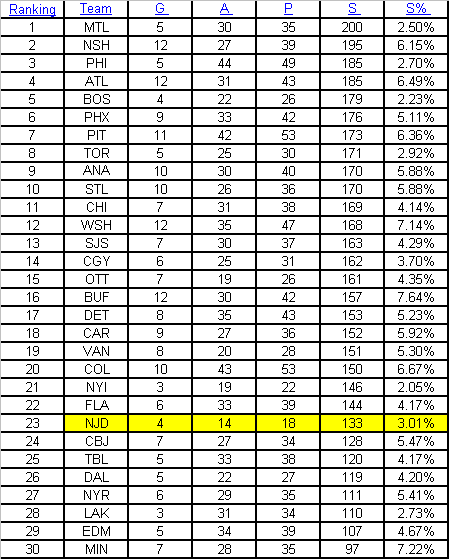 I am not laying all the offensive woes at the skates of the defense. With the money invested in scorers like Patrik Elias, Ilya Kovalchuk, Jason Arnott and others the defense shouldn't be relied upon to score that much.  But as I said above, I think sometimes you 'get what you pay for'.

That said, it is tough to find money for talented defensemen when you are paying the Money Pit Line (Brian Rolston, Dainius Zubrus, David Clarkson) about $11MM.

*Salary numbers generated from capgeek.com and include any buyouts (Sean Avery for Dallas, Alexei Yashin for NYI)

Curious about the teams that are scheduled to spend the most on their defensive units this year?

Besides Toronto (who would actually have spent almost $29MM if you included Jeff Finger's salary) all of the teams above have good shots to go deep into the playoffs.   The five teams above also include the 2009-2010 Stanley Cup Champion, Runner-Up and a Semi-Finalist.

Regardless of the monies spent, the defensive unit should be able to provide more offensive support in even strength situations.  Jacques Lemaire was able to work with a unit less talented than this and coax production out of defensive-minded defensemen like Mike Mottau and Bryce Salvador.   What's the problem this year?  Could this be coaching?  Regression in talent?  Giving too much time to AHL defensemen instead of shortening the bench like Lemaire did?  I'm not sure, but I do know if they Devils plan to be competitive in the future the production from the defensemen will have to substantially increase.   The best way to sum up the offensive production of the Devils defensemen is (pardon the pun):  Offensive.

Will tomorrow's return of Anssi Salmela help?  Is there any possible way it could hurt?