In one of the cooler events (no pun intended) you could ever go to, Michigan and Michigan State played outdoors Saturday in front of 113,411 fans. The event was called the 'Big Chill' and by all accounts it seems to have been a great event.  Despite the grand style of the event, I was more focused-and impressed-by the play of Devils prospects Jon Merrill (1st Star of the Game), Brandon Burlon and David Wohlberg. This capped off a great week for Merrill as he was named to the 2011 World Junior Championship training camp for the United States. The tournament will begin on December 26th in Buffalo, New York.

After the jump, updated statistics for all the Devils prospects in the NCAA, Albany, Trenton and Canadian Juniors are provided.   I have also embedded a link with a recap of the Big Chill, so check out the video below that displays some of the offensive skills of current Wolverines and future Devils, Merrill, Burlon and Wohlberg.

Merrill, Burlon and Gedig all continue to place in the top 10 in the CCHA Defenseman scoring leaders.  McPherson has scored seven points in fourteen games so far this year after only scoring thirteen points in his previous sixty-nine games.  It wouldn't shock me to see both Merrill/Gedig make the CCHA All Rookie Team at the end of the  year.  I would give Merrill a decent shot to be an CCHA first teamer as well.

Please note that while Colgate plays two games next weekend the rest of the Devils prospects playing college hockey-with the exception of Merrill in the WJC-will be off until late December for winter break.

Also, if you missed it I was able to do a feature on Curtis Gedig that I posted over the weekend, check it out here. 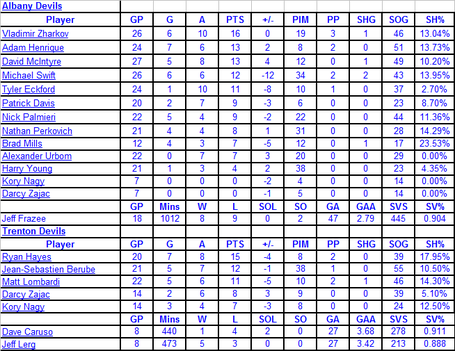 Albany has had a rough go of it lately and I think it's fair to attribute some of that to the constant shuffling of players between Albany and New Jersey.  They are currently 6th in the AHL Eastern Division with a record of 11-16-0 for a total of 22 points.  The 22 points rank 13th in the Eastern Conference. Only the Adirondack Phantoms (Flyers affiliate) have less total points than Albany.

Trenton which has also lost some of it's better players (Trevor Kell, Darcy Zajac) because of roster needs at the AHL level are currently ranked last in the Eastern Division of the ECHL with a record of 9-12-2 for a total of 20 points.

After starting to really heat up Adam Henrique has been out the past few games with a lower body injury.  Nick Palmieri has picked up his game with a goal and four assists in his last 6 games.  In the QMJHL, Eric Gelinas has seven points in his last eight games and has positioned himself in the top twenty defensemen in QMJHL scoring.  Both Wedgewood and Clermont keep playing fantastic, with Wedgewood showing why many think he was snubbed by not being invited to the World Junior Championship Canadian team.

Even though the NCAA will be on break for a few weeks I will still update the site with any new prospect news.  Also, I will be amending the Top 20 ILWT Prospects for December within a week or so.