Let me start off by saying that I am not trying to supplant any  NHL prospect ranking system currently available. I don't purport my list to be better than any other one. I am merely attempting to figure out the 'future value' to the franchise.

What is the future value? I wanted to view prospects from an asset/salary cap perspective as the salary cap and management of it, is one of the key factors in building a successful franchise in the post lockout NHL.

Teams are now built with quality draftees who develop into cost effective Entry Level Contract players and then Restricted Free Agents. Drafting well, something the Devils haven't really done in this decade (John summarized 1999-2005 here), has, in my opinion, been the cause of many of the bad contracts that the Devils are stuck with.

Would the Devils have needed to package a prospect and a 2nd round pick for $4.5MM cap hit Jason Arnott if Petr Vrana (2nd round 2003) worked out? Now I am not trying to question every draft pick and play Monday Morning Quarterback on David Conte's scouting staff, but the fact is that the Devils have drafted poorly in recent years.

The Devils have however helped make up for their draft deficiencies by capitalizing on the undrafted free agent market with the signings of Rod Pelley, David Clarkson, Matt Taormina, Andy Greene, and Anssi Salmela.

Those signings, aside the lack of production from draft picks, pushes the team to overpay for comparable players that 'should' have been developed through the organization. Free agency often ends up overpaying for players who have pushed themselves to make a splash in likely their last attempt to illicit a long-term, high-value deal.

All of the above is my long winded way of saying draft success equals a better salary cap situation and the ability to cautiously dip into the free agent pool to improve the team.

Ok, here we go. After the jump I will explain my thought process in the ranking of the prospects in their respective tiers in descending order, and throw out a few ideas on leveraging some of the prospects/assets the team has to make it better.

I am rating the Devils prospects based upon their upside potential, the position they play, and the salaries that the position would likely command if the Devils had to utilize the free agent market. To do this I looked at the long-term deals signed by players over the last two years and I created a fictional team salary cap situation to simulate the individual player salaries of a team with a $60MM payroll.  This is more of a guide and isn't meant to be the end salary cap structure for a Stanley Cup winner: 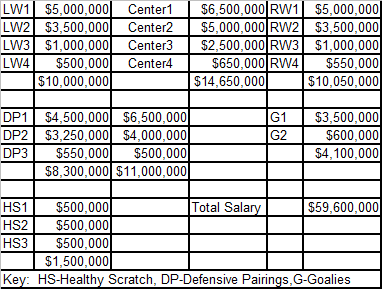 I used past draft scouting reports and what has been seen either at Albany or New Jersey the past few years to help me formulate the list. My future value determination will be the percentages of cap space that the team will save if the player is able to fulfill a specific role on the team through their entry level contract/restricted free agency years. I have also accounted for players who might be blocked from reaching their potential because of similar players in the system.

Centers and two-way defensemen rank higher because they are highly coveted in both the draft and free agency. The chart below shows the frequency of each position that is selected in the 1st round of the NHL draft.

Additionally the Excel sheets for free agents signed to long-term deals in 2009 and 2010 show the different markets for goalies, forwards, centers and defensemen.

My ratings will provide a 'Future Value Cap Savings' percentage after each group or player.  So assuming a $60MM payroll/cap, if a player can fill a position that is valued at $5MM and himself is only paid $1MM, the team has access to an additional $4MM because of his play.  This would equate to roughly 6.67% of the overall salary cap.

One of the basic problems of the Devils organization is the lack of high-end talent. They have plenty of 3rd line forwards and 2nd or 3rd pairings but only a handful of guys who can be really provide salary cap relief

Just as it sounds in the title this group 20-13 has limited upside to really make a dramatic effect either way on the salary cap. The value in these types of players often lies in their knowledge of the organizational philosophy and the possibility they can overachieve.

20. Tyler Eckford-D-Considering his age and his poor performances in NHL duty this year, I have dropped Eckford.  A lot.

19. Scott Wedgewood-G-Still young, but with Jeff Frazee as the heir apparent he will top out as a Devil as a likely backup goaltender

17. Mark Fayne-D-Playing first pairing minutes with Alexander Urbom in Albany he is a likely 3rd pairing defensemen who might overachieve to a 2nd pairing.  Think Mike Mottau

16. Nathan Perkovitch-F-Grinder who gets the puck to the net, could push himself into a 2nd line role with a bit of luck.

15. David Wohlberg-F-Former 5th round pick has been an impact player at Michigan and could keep climbing this list.

14. Mike Hoeffel-F-2nd round pick in 2007 is hoping to improve in his final season at the University of Minnesota.  Hasn't met the promise of a 2nd round choice yet.

13. David McIntyre-C/F-Personal favorite of mine, but he is on the older side (23) so he may top out on the 3rd line, but can play center which is a plus.   Faceoffs would need to improve though.

If the players above perform to the prescribed level at the most the Devils should expect to have about $300K-$500K which would provide the team with a 'Future Value Cap Savings' of almost 1%.

Solid, steady and valuable players will end up in this tier. No one in this category will be an all-star but they will be players that fans probably appreciate for their efforts and success.

12. Vladimir Zharkov-F-He should be in New Jersey now, but that is another story.  Probably a 3rd liner/PK specialist, but my hopes are that he can find the scoring touch to generate 2nd line playing time at the NHL level.  Future Value Cap Savings: 2%-1%

11. Nick Palmieri-F-Hasn't lit up the scoreboard  this year in the AHL, although his style of play and his position (RW) make him as one of the Devils prospects to keep an eye on.   Future Value Cap Savings: 3%-2%

10. Adam Henrique-C-Adjusting to the AHL after a stellar Canadian Junior career.  Playing center is certainly an advantage for him and once he adjusts to the flow of the game and a more refined role at higher levels of competition he should fit in as a 3rd line center.  Future Value Cap Savings: 4%-3%

9.  Alexander Vasunov-F-Is creative, uses his skating speed well and has quietly made a case to be kept at the NHL level for a few more weeks.  Long term, the jury is still out.  Future Value Cap Savings: 4%-3%

8.  Eric Gelinas-D-This former forward has a lot of potential as an offensive defenseman, but needs to show a little more progress at the junior level before he reaches the upper tier. Future Value Cap Savings: 5%-4%

7. Jeff Frazee-G-Bounced back in a big way this year and has re-cemented himself as Brodeur's successor. Future Value Cap Savings: 5%-4%

5-Matthew Corrente-D-Maybe too generous based on his recent play in the NHL.  Let's see what he does when he is back from injury.  Future Value Cap Savings: 6%-4%

This is the top dogs, cream of the crop, etc. The players shouldn't surprise you, but the order will surely be debated.

4. Mattias Tedenby-LW/RW-Love his explosiveness, but he is blocked by other players.  See more extensive thoughts on him below.  Still a great talent.  Future Value Cap Savings:  8%-5%

3. Jacob Josefson-C-My main concern with Josefson has been his propensity for injuries.   As a future 2nd line center he adds tons of value to a team.  Future Value Cap Savings:  8%-4%

2. Alexander Urbom-D-The 2009 3rd round pick has been rocketed through his development and started the year in NJ.  No shame in going down to Albany to work on the finer points of the game and he has the upside of a 1st pairing player and at the very least a 2nd.  Future Value Cap Savings:  8%-7%

1. Jon Merril-D-It's early, but at Michigan he is showing why he was projected to go in the 1st round of the draft.  Has size, offensive ability and is only getting better.  Future Value Cap Savings:  9%-7%

Josefson's range is hurt because he could prove to be only a 3rd line center.  Tedenby ranks lower primarily because of the left wing depth the team has, it is no knock on his play or potential.

Now while I am not the biggest fan of free agency don't think that means I am beholden to seeing all of the prospects above be Devils for life. I view prospects, draft picks and roster players the same way: as assets. If it is advantageous to trade a player or pick it should always be explored. Sometimes the value of a player is at it's highest before he even steps on the ice.

For example of leveraging assets, two players who don't get their due in helping the Devils to three Stanley Cups are Tom Kurvers and Brendan Shanahan. Kurvers was traded to the Maple Leafs for a 1st round pick (which ended up being Scott Niedermayer). The St. Louis Blues signing of Shanahan compensated the Devils with Scott Stevens (at worst it would have been a compensation package of Rod Brindamour and Curtis Joseph). Lou Lamoriello has leveraged assets recently to give himself salary cap relief, exhibited by the 1st round pick traded to the San Jose Sharks for the Vladimir Malakhov contract/cap hit. So what opportunities are out there to capitalize on? I have three in mind:

1. Mattias Tedenby-He is explosive, exciting to watch, and still very young. He is also on the smaller side physically and his natural position is a spot where the team has Ilya Kovalchuk and (hopefully) Zach Parise for the foreseeable future. I would however only move him for a comparable puck moving defenseman. At a glance the Avalanche would seem to be great trading partners with their depth at the blue-line.

2. 2011 1st Round Pick-No, I am not crazy and yes I realize the team is last in the standings but what better time to trade it then now? I would feel confident in the fact that a team like Toronto would take that pick right now, suck it up and take a Zubrus and possibly another bad contract for a shot at that pick.

3. Zach Parise-While a trade idea was explored in the offseason in this fanpost by user Zelepukin, I am not specifically talking about trading him. I am talking about trying to open up contract extension discussions now, in a good faith manner to lock him up with a multi-year deal. Even though his agent has stated that no discussions will occur until after the season, if Jeff Vanderbeek and Lamoriello make a fair offer to him while he is injured wouldn't it be in his interest to take it? If he is offered a deal in the $50/$60MM range now would he say no? If he did decline the offer wouldn't it be helpful for the Devils to get a sense of what he and his agent are looking for before the trading deadline? Let me be clear when saying I want Zach Parise on this team for a long time. But if, in the best interest of the team, he provides more value via trade or if the Devils would be better off letting him leave via restricted free agency those are options that should be explored.