For whatever reason I am a very self conscious Devils fan when it comes to one area:  Attendance.  For a variety of reasons the Devils have never drawn as well as they should have, especially considering their level of success in the tri-state area and the futility of the Rangers and the Islanders.  I have always believed that the Devils attendance will surge when the Devils fans born in the late 70s/early 80s start to have the buying power to purchase tickets more frequently.  Devils owner Jeff Vanderbeek seems to agree with this idea, when talking to John Buccigross earlier this month. That said, it still pains me to see a typical Tuesday night 'announced' crowd of 13,000.

After a recent twitter request from one of my followers, @JWeinstein06, to talk about attendance I decided to compare the first 11 home games from 2009 through 2010.  It also gave me a chance to look at the conferences and divisions that the Devils have played so far this year which allowed me to get a sense if there are any favorable matchups for the Devils in the remaining part of the year. Head after the jump for more. 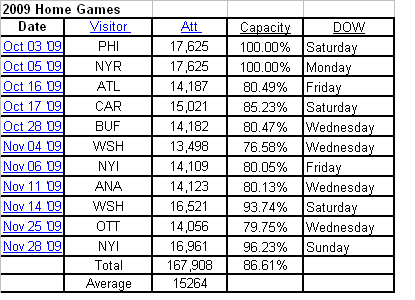 After the first two sell-outs there were some nights with lower attendance, but only two games that resulted in less than 80% capacity.   The Anaheim game was helped by the appearance of members of the 2003 Stanley Cup Finals Team. 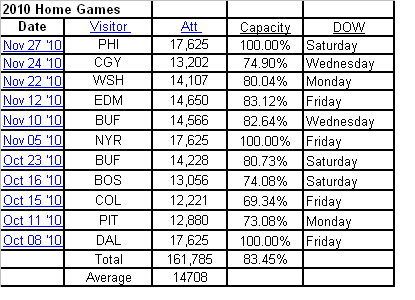 The Rock was sold out all three times the Penguins came in last year, making the 12,880 figure look even worse.

Through four games, the Rock has averaged 14,425 per game vs. Western Conference teams.  This number is helped out by having Dallas scheduled as the opening night game but it trails the 2009 attendance average for Western Conference visitors which was, 16,026.

Now for some good news/bad news:

While down a little over 3% from 2009's attendance, if the Pittsburgh Penguin game had been scheduled for a normal time, the Devils attendance would be almost on par from last year.  Additionally the Devils played four division opponents in their first eleven home games last year compared to three this year, one of which was the aforementioned Penguins game.

The Sabres/Oilers games on 10/10 and 10/12 claimed to have an excess of 14,500 people at both games.  This number is probably inflated AND there were tons of tickets given away for both games.   There were offers for free tickets that went out to those who attended any of the Jersey Tour events and either by accident or design, the offers were easily transferable to others.   I received free offer emails from three to four friends that they had been forwarded.

The Western Conference opponents that the Devils have played haven't drawn well, which should change with Detroit, San Jose and some marginally popular teams visiting the Rock the rest of the year.

There are a few opponents/days of the week combinations that look to have very low attendance unless the marketing team gets their act together:

Another three dates that could be problematic:

Typically Friday night games and games to start off the new year draw well, but the opponents in the three games are not the most compelling.

If the Devils keep hovering around eight points away from a playoff spot, you could see some 11,000 and 10,000 nights in any of the ten games above.

While loosely related to attendance, in looking at the upcoming schedule I saw some positive items for the Devils which I wanted to point out.

At this point, the Devils have only played two games against the Southeast conference, both against Washington and they are 1-1.   They were 14-6-0 vs the Southeast Division last year.   This year they are 4-5-1 against Western Conference teams, and they still have eight games left vs the West this year (5 home/3 away).     Last year they were 7-9-2 against the West and were 5-3-1 at home.

They have completed the long west coast road trip, which they also struggled on last season.

If the Devils are to make a run and pick up some points, December is a good month to do it.  The following schedule lends itself to an eight  or nine win month.

Maybe I am optimistic, but I think 8-4-1 is a possibility.  Fingers crossed for 9-3-1.   The last four home games are all very winnable and if they don't get six out of eight points there, we might be on the Adam Larsson watch more quickly than we thought.  The road games are tough and if they are able to come out of those games with a 2-2-1 record I would be extremely pleased.