Would Changing the Devils Team Captain Make Any Difference?

Share All sharing options for: Would Changing the Devils Team Captain Make Any Difference?

Like many fans, I have had issues with the leadership of Jamie Langenbrunner.  From his post game quotes to his rift with Jacques Lemaire last year the question has to be asked:  Is he the right leader for this team?

My personal answer would be no.  Three straight first round exits for a team with lofty expectations year in and year out should be proof enough and the background noise he made last year with Lemaire should have had him stripped of the captaincy.  When the Devils acquired Jason Arnott back in June, I assumed he might take over that role-as he did with the Nashville Predators or that the captaincy would be given back to Patrik Elias-and that Jamie would be a victim of the necessary changes that Lou Lamoriello said were coming.  Well, we know how the rest of the summer played out and I won't bore you with the rehash.

Would it matter if Jamie had been traded or stripped of the captaincy?  Would it motivate the other players or create any difference?  This made me curious about the impact of a captain change on a hockey club. I looked at each NHL team since 2000 to see who had captain changes during the year to determine if a player being stripped of the ‘C' made any difference.  After the jump I will list out all the changes that have occurred.

Let me first explain how I approached this.  I looked for captain changes during the season either by trade or some other method and captain changes that occurred during the offseason only if the player who was captain still remained with the club.  In other words, if a captain was traded in August, I wouldn't list it here.  Further, if a team traded its captain at the trade deadline and didn't name an immediate successor I didn't note it.  Finally, please note that some teams (Minnesota Wild, Buffalo Sabres) rotated captains during many of these seasons, so those changes were also omitted. 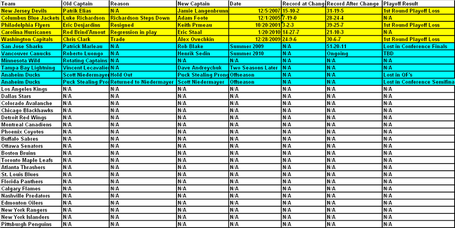 What did I find?  A few things:

A captaincy change mid-year is rare. I have highlighted the instances of this in yellow in the chart above.  In almost a decade-from what I was able to gather-only five captaincy changes occurred during a season.  The Capitals and Hurricanes changes were based upon the logical succession planning with their star players.  Luke Richardson stepped down for Columbus, and they played slightly better under Adam Foote, but still missed the playoffs.  Desjardins resigning and Keith Primeau taking the captaincy could be deemed impactful if it happened if the Flyers were playing poorly.  From what I was able to gather, Desjardins quit the captaincy after game 8 of that season (a 6-3 win) and the team was 3-2-3.  Not exactly a dire time for the Flyers.  The only interesting change out of that group was by the New Jersey Devils, which I will talk about further below.  Plus, on all of those changes there is no evidence of positive playoff impact.

The other offseason changes, which are highlighted in blue, represent captaincy changes that occurred in the offseason and the player who lost the ‘C' still played for that club.   The only change that could be deemed impactful was the change of Patrick Marleau to Rob Blake.  San Jose was able to get to the conference finals with Blake, but it is hard to make the case that they did so because of the captaincy change.   Anaheim actually changed captains twice in a two year span, primarily because of Scott Niedermayer's uncertainties about his future with the club at that time.  Chris "Puck Stealing" Pronger both took the captaincy away and gave it back to Niedermayer.

After looking at this information I think it's pretty fair to say a captain change won't alter the team's play that much.  So with or without Langenbrunner as captain, I don't think it will impact the Devils in any way.

That said, looking at how rare the mid-season captaincy change is I find it more astonishing that Lou Lamoriello let a rookie coach-Brent Sutter-take that responsibility away from a player who had been with the organization so long and accomplished so much.  The Devils record before and after that change are similar so I don't see how Langenbrunner made a big difference.  It's interesting that right now Elias seems to be the more productive and vocal player in the locker room.  While I don't think it would have any impact, maybe it's time to right a wrong and give Elias the ‘C' back.

Are you surprised by the lack of captaincy changes?  Think it's even worthwhile to discuss removing the ‘C' from Langenbrunner?   Thanks for reading and sound off below!