Share All sharing options for: Henrik Tallinder and His Defensive Partners at 5-on-5 for the New Jersey Devils So Far

Henrik Tallinder signed with the New Jersey Devils this summer for a 4 year, $13.5 million deal.  At the time of the signing, general reactions on this site were positive.  Sure, his offense was nothing to write home about. He's still a defensive defenseman, but most figured that he'd be a steady player.

However, 17 games into this season and it's been anything but steady for the man wearing #7 for New Jersey. Based on the 5-on-5 Corsi charts from game to game at Vic Ferrari's Time on Ice, while he's has a combined positive Corsi at +28; he's been on the ice for 8 goals for and 17 goals against.  Tallinder has continued to get big minutes on the Devils, second on the team in average ice time (22:21), despite making bad decisions in his own zone that have led to goals against, amid outright poor games.  Even the Corsi is boosted given that he had a amazing +22 in the 3-1 loss to LA last month.   As far as even strength on-ice/off-ice stats go from Behind the Net, the GA/60 shooting up from 2.52 to 3.76 and the SA/60 increasing from 25.0 to 26.1 - all when Tallinder steps on the ice.   Even against tough competition, those aren't good numbers at all.

Quite frankly, I have to ask: What's up with Tallinder?

Defense is always tricky to analyze since one bad mistake can overshadow one's game.  The player could also be hurt by his partner playing bad or playing with forwards who don't effectively backcheck.  While I may not be able to sort out whether he's truly playing under his talent level on defense, we can parse out some of these elements.   Today, I've looked at who he's been paired with.

it’s probably greene, but he’s played a lot with magnan, corrente, and urbom. and this is part of the problem.

By figuring out who Tallinder has been paired with at even strength - which takes up most of the hockey game - not only will my challenge to the user be met, but also get one step closer to figuring out what's wrong with Tallinder this season.  Hopefully from there, there may be some idea as to what can be do about his performances.

Vic Ferrari came up with an excellent script to figure this out.  He's made one that generates sortable 5-on-5 head to head ice time charts based on the NHL's official reports of the game.   You can enter the game number (the last 5 digits in the URL) on this page of Time on Ice.  You can then see for yourself who each player has matched up against and has played with at 5-on-5. Since the digits are rounded up to the nearest tenth, they don't always add up perfectly; but for the purposes of figuring out who's been with who, it's acceptable.

Game by game, here are the defenseman Tallinder has played with the most so far this season. (Note: MCD here means Most Common Defenseman.) 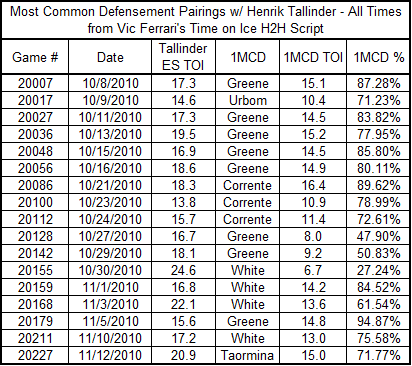 There is variation, but for the most part, Greene has appeared the most with Tallinder.  Notice that his primary partner generally plays 70-90% of the game with him.   There are times where others have had a couple shifts with him, like carry over from special teams, staying on for shifts, coming on whereas the other defender didn't come off, etc.  That said, there were 3 games - all during the west coast road trip - where Tallinder's time was more evenly split with other defensemen.

How the MCD has changed over these games is also of note.  It seems that if a pairing doesn't work for a few games (e.g. the last Corrente-Tallinder pairing was in that 6-1 loss to Buffalo where the Sabres blew them up repeatedly), John MacLean seems to return Tallinder to pair with Andy Greene before deciding on to who's next.   In the Devils' last game, Tallinder played largely with Taormina.  How long will that last?  History would suggest a few games before MacLean puts him with Greene again for a game.  Of course, veterans heavily outnumber rookies in terms how often they have been the MCD with Tallinder (Greene - 8, White - 4, Rookies - 5)

Let's take a step back and forget about the MCD.  What about overall?  Who has Tallinder been playing with at even strength over all 5-on-5 hockey this season? 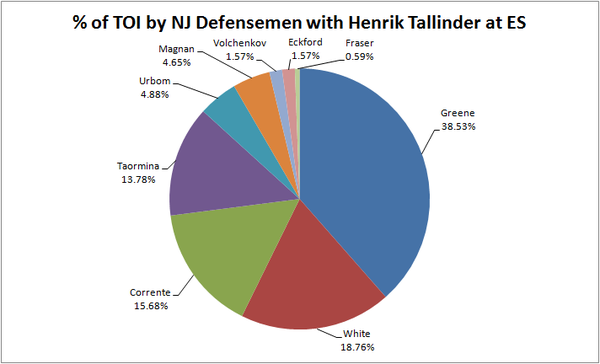 Triumph44's initial guess was right: Tallinder has played the most next to Andy Greene this season.  Moreover,  the time played with Greene and White combined is larger than every other defenseman on the team.  Given that the majority of his main pairings at 5-on-5 were with Greene and White and both represent the most ice time played with Tallinder, I don't believe that Tallinder has been dragged down by covering for inexperienced defensemen.

If Tallinder's not getting help and that hurts him, it's because he's not meshing with White and/or Greene (making it a bad pairing), he's not getting assistance for forwards (this would warrant a separate post), or the goaltender is letting him down (unlikely given how much they've been held out to dry this season).

A few additional notes about the rookies.  Matt Corrente finishes third on this chart, but that's largely due to those three games where he was his primary partner, and the two games before and after that stretch. Before those 5 games, Tallinder rarely played on the ice with him, and Corrente has been out hurt after that fifth game. Tallinder has played with Matt Taormina to some degree in every game this season, but always for relatively small minutes. The range varied from 0.1 (11/5 against the Rangers) to 4.8 (11/3 against Chicago) before the win over Edmonton where Taormina was his main partner for the night.

As for Alexander Urbom and Olivier Magnan-Grenier, those percentages are the result of just spot duty. Urbom was Tallinder's main partner for just one game, other than that it's either for a few shifts or none at all.  Magnan's ice time with Tallinder looks more like Taormina's only without a game where he was mainly paired with Tallinder and the total number of games.  For some reason, Tyler Eckford got 3.5 with Tallinder on 10/30 against the Kings; but other than that he hasn't seen much 5-on-5 action with Tallinder (or most other Devils defensemen).

The last thing this chart tells me is that there's one veteran option for Tallinder that MacLean hasn't given a lot of minutes yet: Anton Volchenkov.  He's low on this list largely because he's appeared in only 5 games this season.  Even so, Tallinder didn't see any time with Volchenkov in the first two games and only a little bit prior to last night.

Against Edmonton, though, the Tallinder-Volchenkov pairing was together for 4.0; the second most common pairing behind Tallinder-Taormina.  So MacLean and the coaching staff now have more than just a few shifts look at for that pairing.   Perhaps it can be a viable pairing, maybe enough to try out for a whole game?   It's not like MacLean has been afraid to pair rookies with Tallinder for most of a game; and if it doesn't work, MacLean can just change the pairing back to Tallinder-Greene again.

So Tallinder hasn't spent most of his time on 5-on-5 hockey being paired with rookies, but with the veteran Andy Greene and Colin White.  So how have bad have been Tallinder-Greene and Tallinder-White?  A quick look at those Corsi charts from those respective games where Greene or White were the MCD can provide some idea.

In the 8 games Greene was Tallinder's main partner, Tallinder and Greene finished the game with 9 total goals against at 5-on-5.  This doesn't mean both were on the ice for 9 GA, just that each one was.   That said, the Corsi totals look much better. Tallinder put up a combined +16 Corsi in those 8 games, while Greene finished with an even better +36.  Even if the video shows them making dumb errors on some of those goals against, the puck was moving in the right direction when they were on the ice at evens.

For the 4 games where White was Tallinder's most common defenseman partner, Tallinder was on the ice for 4 total goals against and White was on the ice for 5.  Tallinder combined for +10 Corsi in those 4 games, including his highest of the season (+22) and his lowest (-14). White totaled -4.  While Tallinder and White didn't play with each other all that much even when White was the MCD, it didn't drag Tallinder down all that much more in terms of Corsi.  White having a negative Corsi doesn't surprise me too much, given that he's not at all an offensive player.

Ultimately, looking at who Tallinder has played with at least determined whether or not he has been dragging rookies around (not really) and who the coaches have placed with him the most (Greene).   But it doesn't really get to the heart of why Tallinder hasn't been playing all that well unless the answer really is that he and Greene aren't good together.

Therefore, I want to know your opinion. What more can be looked at to determine how bad Tallinder has been and why he has has been so bad?  What should be looked at next, if any?  Having read this post, what do you think should be done, if anything?  Please leave your answers and other Tallinder-related thoughts in the comments. Thanks to user triumph44 for the initial inspiration to look at Tallinder's defensive partners; and thanks to you for reading.