Back in the summer John analyzed the lack of Devils draft success from the 1999-2005 drafts. This was prompted by an article from Derek Zona of Copper & Blue who looked at the number of 'career' players each NHL team sucessfully drafted. He proceeded to further break down the ratio of those successful picks into three categories: 1st Round, 2nd Round and 3rd Round-End of Draft. The ratios for each team were aggregated and ranked with the Devils ranked 27th out of 30 teams in drafting 'career' players. Career players were defined as players who had played at least 200 NHL games.

The general ideas I pulled from John's article were that the Devils either hit a home run or failed miserably in the first round, barely got any value from any other picks after the 1st round and couldn't pick a European or Russian if their lives depended on it. Glen Sather laughs at their overseas picks from that period. Luckily the signings of Brian Rafalski and John Madden via undrafted free agency made up for picks like Adrian Foster and Ari Ahonen.

So, how have the Devils done in the last few years? Has their overseas scouting improved? After the jump we look at what Mr. Conte and the development staff have accomplished from 2006-2008. I will also take another look at the 2005 draft to rationalize those picks and how they were probably the best options for the Devils at the time.

In his original article John left off saying the following:

Of course, if the prospects from recent drafts turn out well and the Devils do get more players out of them, then the effect of the 1999-2005 draft failings will be mitigated.   All we can do is hope now.

Well I think David Conte and the rest of the scouting staff has upped their game and reversed missteps of the past.

Ok, so I know it is too early to fully analyze the drafts utilzing the same methods as Derek Zona did. That said, I think we can get a sense of what could happen in a few years time provided we take some liberties with player projections. Remember this isn't measuring any sort of metric besides games played, so the Cam Janssens and Mike Rupps of the world equate the same as a Henrik Zetterberg (7th Round pick).

Here are the 2006-2008 draft classes from the New Jersey Devils and where they are currently playing in the hockey world.  Information generated from hockeydb.com. 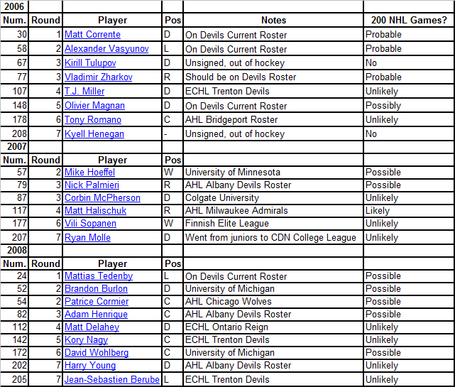 Right now (and I don't know if this is necessarily a good thing) there are three draftees from the 2006 draft on the roster.  Matt Corrente and Oliver Magnan might be fighting for the same spot shortly resulting in one being sent back down to Albany but Magnan has proven he can contribute to a certain degree at this level.   Whether he plays 200 games at the NHL level is still a mystery, but would it shock you if he did?  I can realistically see Zharkov, Corrente and Vasyunov reach that level and Magnan as a possibility.  Let's be optimistic and say that Magnan does.  That would make the Devils 1 for 1 in 1st and 2nd Round picks and 2 for 6 in the 3rd Round+ category.  Not a bad start.

With only 6 picks in the draft (and no 1st Round pick) the Devils seem likely to have at least Halischuk eventually cross the 200 game threshold.  Halischuk, traded to the Predators in the offseason to acquire Jason Arnott, has started off well in the AHL this year and could settle in on the Predators late this year or early next year.  The other three possibilities would be the top 3 draft picks of that year: Hoeffel, Palmieri and McPherson.  Palmieri could slot in at RW in the near future so I think there is a decent shot he can become a career NHLer.  Hoeffel, while underwhelming at the collegiate level so far still has great size and should be able to make it to the NHL, with a modest upside.   The way I have seen him score goals I keep projecting a Randy McKay, but I think this season has made me so delusional I just really, really miss Randy McKay.  McPherson, a stay-at-home defenseman, will likely have to fight his way through the ECHL and AHL to get his shot at the NHL, so I am not that high on him at the moment.

So at this point I would say Hoeffel, Palmieri and Halischuk will make it as career players.  That brings our tally to 1 for 1 on 1st Rounders, 2 for 2 on 2nd Rounders, and 4 for 11 in the 3rd Round+category.

A bit too early to project but Tedenby, Henrique, Burlon and Cormier give the Devils another shot to have a very successful draft.  Wohlberg is a possibility as well and while I think it might be a stretch, don't count out Harry Young just yet.

For arguments sake let's say Tedenby, Henrique, and Cormier end up playing 200 games.  That would make the Devils perfect on 1st Round picks, 3 for 4 on 2nd round picks and 5 for 17 in the 3rd round+category.

Way, way too early, but considering there is already a 3rd Rounder (Alexander Urbom) and a 1st Rounder(Jacob Josefson) having played in the NHL, I think 2009 should end up being a successful year.

Overall, with some upside projection utilized the Devils will have the following ratio's of success in the 2006-2008 period:

If you recall the Devils ranked 28th in the original research that Derek Zona did and ranked as follows:

Before we get too excited about the results, especially in the 3+ category let's take a step back and look at three CBA changes, enacted in 2005,  that possibly helped skew the numbers in a more positive light.

3. Unrestricted free agency.  With the age of unrestricted changed from 31 to 27, teams are more likely to 'see what they can get out' of players before they decide to commit to a player for the long term.

Reduction of draft rounds is a no-brainer, but it will take a few years before we get a full sense of the other two  Just for the heck of it I took a look at the 2nd Round of the draft from years 2004-2007 to see if there has been an increase in NHL players resulting from that round and sub-categorized those players into those that might make it into the 'career' category.

It’s still way too early to tell based off this limited sample, but you can see the 2006 2nd Round already surpassing the 2nd Round in 2005/2004 in terms of career players.

To see how the Devils stacked up against other clubs from the 2006-2008 time period I also took a look at the Islanders (who were ranked number 1 in the original article by DerekZona) and the Red Wings (number 11). I utilized the Hockey's Future‘s rankings of both team's prospects and depending on the player's ranking and draft year I made some educated, but generous, guesses of who might eclipse the 200 game mark

I think that this is an interesting way of looking at draft classes to judge the scouting department so I will keep tabs and update every quarter or so.

When we last looked at the 2005 draft class it wasn't that pretty. Only Niclas Bergfors and Mark Fraser had made it through to the NHL level.  Both players should cross the 200 game threshold to be considered 'career' players, with Jeff Frazee, Patrick Davis and Mark Fayne as possibilities.   That said, what concerned me most when looking at that entry draft class was the lack of quality or production the Devils have gotten from that draft so I was curious as to the rankings for that year.   Here you can view the final CSS Rankings for North American Skaters which had Davis at 26th overall and Fraser at 50th.  Of course this didn't pan out and the rankings are rarely 100% prophetic, but as far as 'value' you can't argue that Lamoriello and the Devils got good value picks in Fraser and Davis.  While it doesn't make up for the value of player the Devils could have had, they weren't reach picks or European skaters who quickly flamed out.

So, has David Conte and the Devils scouting staff redeemed themselves with recent drafts?  Was I too generous or not generous enough when projecting which Devils players will end up playing 200 career games?  Thanks for reading.