Inspired by posts from Pension Plan Puppets and On the Forecheck, I'm going to take a look at the video of some goals scored and analyze them frame by frame, or in this case, frames of the video on chronological order. All video footage is from NHL.com

Okay, i'm sure a lot of you don't want to re-visit last night's game, especially with the horrendous ending to the game. But there were some things I've wanted to look at one of the goals from last night: Jason Arnott's power play goal. The Devils power play has struggled so far this season, and I wanted to take a look at the play itself to see whether the goal was a product of the Devils Power play actually working, or the product of shoddy defense by the Sabres PK (which is one of the worst in the league, 25th out of 30).

First and foremost: the Video of the goal

Now for the Analysis:Our first frame will be at 0:05 in the video, with Andy Greene holding the puck 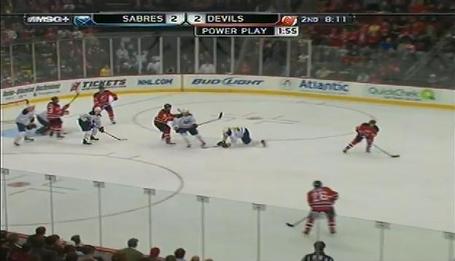 As you can see, one of the Sabres' forwards (Mike Grier I believe) is down. Grier went down to block Greene's shot, but Greene never got the puck off. He can't shoot here, so he passes to Patrik Elias. Note the position of Dainius Zubrus and David Clarkson. They're up front keeping the two defensemen busy, and making trying to make life hard for Jhonas Enroth. 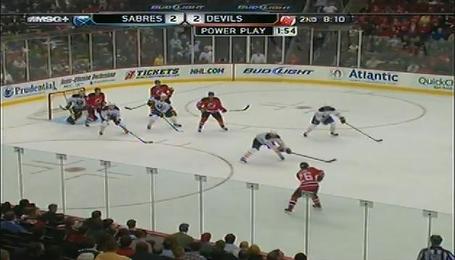 Elias can't do much either, so he passes back to Greene. The two pass back and forth for a bit, before Greene ends up with the puck at the blue line. Again, note that one defenseman is basically committed to both Zubrus and Arnott right now. Note: I skipped a few frames just because the next few frames were just Elias and Greene passing with each other 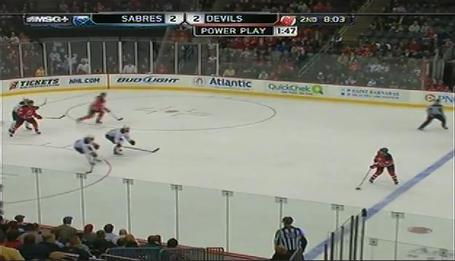 As you can see in the left of the frame, Jason Arnott's making his way to the right faceoff circle.The two defensemen are still tied up with Zubrus and Clarkson, so Arnott's basically alone right now, unless one of the two forwards is able to pick up Arnott (thus leaving Greene alone). 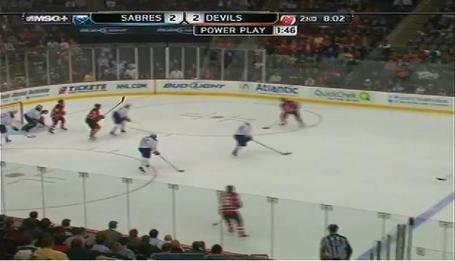 As you can see, Paul Gaustad is trying to play the puck instead of the man, as he was trying to intercept the pass from Greene to Arnott, who just has just received the puck. This ends up being a big mistake... 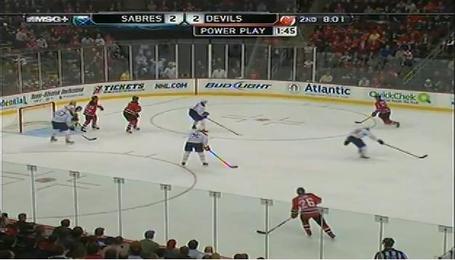 As Arnott manages to fake out Gaustad here by faking a pass back to Greene (off screen at the moment), giving him lots of room to ready his massive shot. Gaustad's not going to make it back to stop the shot.  Note the position of the defensemen, as well as the position of Zubrus and Clarkson. Enroth can see Arnott about to shoot, but with two big bodies in the way, he's not going to be able to see where the puck is going. Also note David Clarkson's able to freely screen Enroth here. 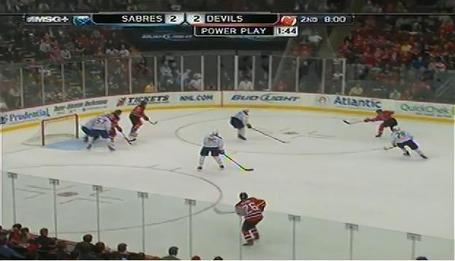 And the finished product: Jason Arnott gets a shot on net while there's chaos in front of Jhonas Enroth. Devils power play goal.

My conclusions from the video review: the passing looked good on the play, as in not too many risky passes or bad passes. If there's one thing the Devils need to do, it's cause more chaos in front of the net. Zubrus and Clarkson did a lot of grunt work tying down the two defensemen up front, and Arnott gets rewarded with some open space to hammer the puck. As for the Sabres PK, it looked alright, but the one error by Gaustad was one reason why Arnott was able to get such a nice shot off.