The Devils can't score. Have you heard?

To obtain goals, one need shots first. The way the Devils shot the puck so far this season may tell us a lot about about their scoring woes. Is it simply quantifiable? Maybe they just need more shots. What about the quality of the shots? The Devils could be simply firing an infinite amount of shots at sharp angles and far distances. Where and how far have these shots been? Here's an analysis of the Devils shot quality and quantity. More after the jump.

The quantity part of this post is simple. Shots are easily calculated. Here's a chart containing the all the teams with their shot and goal data. I ranked them in shots per game which is highlighted. I obtained the data from NHL.com's Team Stats Page. 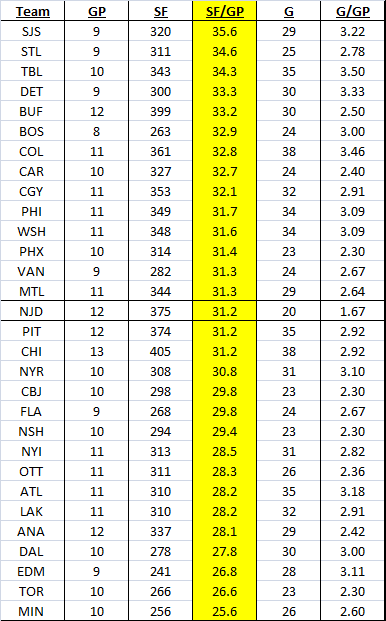 The Devils fall right in the middle of the pack with 31.2 shots per game. The NHL average is 30.6, thus the Devils are slightly above average. Yet they are over a full goal below the NHL average in goals per game (which is at 2.77). Have the Devils just been getting goaltenders  at their best? They have already faced of likes of Ryan Miller(twice), Jonas Hiller, Tim Thomas, Marc-Andre Fleury, Antero Niittymaki and Jonathan Quick.

It's possible that the shots the Devils are taking aren't good ones. How has the shot quality been? One was way to judge this is shot distance. Luckily, BehindTheNet has this exact data (Big thanks to Gabriel Desjardins). I've calculated the average for each team. Here's the breakdown of the Devils. It's only for the first 10 games. To give you a visual and a sense of range, the distance between the crease and the blue line is 64 feet. The Devils average 33.6 feet per shot.

And when compared to the rest of the league ( .xlsx Excel file), they rank 3rd best (I've omitted the Rangers because the people working there don't know what they are doing) behind the Tampa Bay Lightning and San Jose Sharks, two teams that take a lot of shots. Is there any way we can explain the scoring woes?

Well what if most of these shots, close shots mind you, are at bad angles that are advantageous to the goaltender. A good way to analyze this is by looking at the where exactly on the ice did each shot take place. Luckily again, NHL.com's recap for each game has an Ice Tracker section where you can filter shots and other Real Time Stats period by period. Here's an Ice Tracker example from the Devils last game.

What I've done is correlated a general shape from the Ice Tracker onto a blank ice rink (using the great Paint program) for each game where most too all of the shots were taken by the Devils. Each image has three colors representing each period (some with four due to overtime). Orange = 1st Period; Green = 2nd Period; Blue = 3rd Period; Red = Overtime:

Here is each game of the 12 games starting with the most recent:

(Note: I don't know if this is confusing, but compare this to the period by period Ice Tracker example above and you'll get the gist)

Around the slot and crease, the Devils are able to stay between the faceoff dots of the circles. The Devils also take many shots along the boards on the blue line. I see that they have been able to get into good position. Yes there is the occasional bad period here and there. The Devils were forced to the outside in periods at Washington, vs Pittsburgh, and vs Boston. The three wins this season (at BUF, at MON, at ANA) have no real relationship. What is good news is the last four games have seen at least one period right in the center on the zone from the crease to the blue line. Overall though, I can't say the Devils position have been horrible. It's been decent.

In conclusion, the Devils are right at the average in shots on goal per game. It's certainly not the number of shots that is causing their scoring problem. The quality of their shots are even better. They have third closest average shot distance. Their shot position on the ice is between the dots and towards the blue line. They have been able to shoot in broad areas, mixing up their shots without having to go to the outside for the majority of the time.

So why haven't the Devils been able to capitalize and score? The Devils have faced good goaltenders, could this be the real reason? Is it luck? It's possible that this is some phenomena that no one can explain and they will eventually regress to the mean. One thing is for sure, it better change soon, because the Devils are 12 games in. Soon it will be 15, then 20, then 25.

So what do you think? Have you seen things differently when watching the games? What do you think is the reason for the Devils scoring problems? Let us know in the comments. Thanks for reading.