Share All sharing options for: Setting Realistic Expectations for the Devils Younger Players

The youth movement has begun. Even with Jacob Josefson and Matthew Corrente being assigned to Albany yesterday, the New Jersey Devils should still have  (assuming the Adam Henrique call up move was a 'paper move' as alluded to by Tom Gulitti) at least one rookies-Alexander Urbom -that will be asked to contribute on a third pairing, power play, etc to a team that's endgoal is not a rebuilding year but a long playoff run. Plus it has been alluded to, and likely, that Josefson, Corrente, Vladimir Zharkov and Tyler Eckford will spend time in New Jersey this year. I wouldn't be shocked to see David McIntyre or Nick Palmieri show up.

Infusions of youth has its upsides (talented players with low salary cap hits) and downsides (dealing with younger players getting acclimated to the NHL). Because of the NHL salary cap and the structure of entry level deals/restricted free agency attempting to give a young player a roster spot seem logical and works conceptually. But does it work practically? Meaning are those players dependable and productive. Since the Devils are under salary cap pressures this year and next I wanted to look at last year's rookie class to see how effective those players were. With at least two and maybe more young players likely to play a lot of minutes this year it's important to set realistic expectations for these players. After the jump you will get a chance to look at the younger 'impact' players from last year.

To generate this list I looked at three primary qualifications.
1. The player either made his debut last year or received a vote for the Calder Cup Trophy. I was able to find this information via HockeyReference.com.
2. The player appeared in at least 50 games. I probably should have used 60 but I think 50 still shows the data I wanted.
3. I didn't look at goalies. If the Devils have to use a rookie goalie for any long stretches this year they are screwed so I'd rather not think about that.

Below you see the results of what I generated. 21 players played at least 50 games last year. 3 centers, 5 left wings and 3 right wings appeared on the list. There were also 11 defensemen on the list.

To help measure impact I sorted this list by GVT (Goals Versus Threshold) a statistic developed by Tom Awad to measure individual on-ice impact.   Also, in case you wanted to find out more about GVT and how it is measured you can look at Tom Awad's explanation here, here and here. 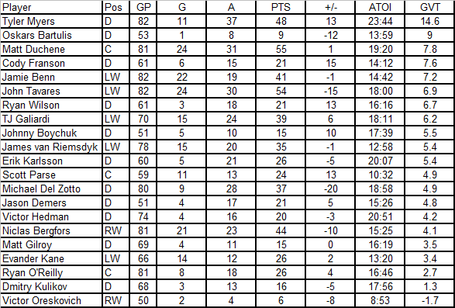 You can gather a few positive things from the table above.  Tyler Myers, as a rookie, played a ton of minutes, and was highly effective at both ends of the ice for the Sabres.  The Colorado Avalanche made the playoffs last year with four young players (Matt Duchene, TJ Galiardi, Ryan Wilson and Ryan O'Reilly) making their debuts and playing at least 16:00 per game.  Considering Urbom/Taormina's inclusion on the opening day roster it is encouraging to see that half of the list is defensemen and they averaged at least 14:00 minutes of ice time a game.  That fact, combined with a positive GVT for each defenseman shows, that they weren't hurting the team.   Which, when you think about it is really a self fulfilling prophecy as you wouldn't give that many minutes to a young player who is hurting your team.

There are also a few negatives.  The first is the lack of centers.   The centers on the list had varying degrees of effectiveness/roles for their respective teams.  Duchene was a top pick for the Avalanche that played extremely well for a rookie.  As the 3rd overall pick in the 2009 draft this type of production wasn't fully expected but it wasn't surprising either.  Scott Parse, a 26 year old center for the LA Kings, played a 3rd/4th line role all year.  Ryan O'Reilly a 2nd round pick of the Avalanche in 2009 started off strongly with 5 goals and 13 assists in the first 42 games of the year but tailed off a bit towards the end of the season.

The second is the competition levels the defensemen played against.   The chart below looks a little deeper into the 11 defensemen by recording their Quality of Competition and Likely Zone Starts.  The team rank refers to how each player measured against his defensive teammates. To rank the defensemen I utilized BehindtheNet.ca to filter each team by defensemen who played 50 games and averaged 10 minutes of ice time per game.  Only two defensemen, Hedman and Myers, ranked above 5th when ranked against their teammates.  The rest of the players were either last or next to last compared with their teammates.  The Likely Zone Start was simple to find out by looking at the offensive vs. defensive faceoff's each player was on the ice for. Only 4 of the players Likely Zone Start was on the defensive end of the ice.

So why is it important to look at the centers and defensemen that debuted last year?  To get a realistic expectation of what to expect out of young players like Josefson, Taormina, Corrente, Urbom, McIntyre, etc.  this season.  Often times fans/media tend to expect younger players to instantly come out and produce as they would at the pinnacle of their career.  This is unlikely to happen.  Players like Tyler Myers, Victor Hedman, John Tavares and Matt Duchene were all expected to be effective and in the case of Hedman, Tavares and Duchene were able to work within a low set of expectations for their clubs.   This doesn't diminish their accomplishments it simply points out that teams with lower expectations or in a rebuilding mode aren't as likely to pull the plug on a rookie whereas a team like the Devils who are built to win now may not have the luxury of waiting for the player to go through growing pains.

The players initially on the roster (Urbom/Taormina) will be very interesting to track during the year.  Each player will have different experiences if John MacLean's current defensive pairings are consistent throughout the year.  Currently the practice defensive pairings, as per Tom Gulitti's blog yesterday were as follows:

Colin White-Matt Taormina (Well it was Taormina, we will see who White is paired with over the next day or so)

Tallinder/Greene I really like and I explained my reasoning for this in the InLouWeTrust season preview.  Check that out here.   I am going to assume that the above pairings will only be utilized at even strength and that Volchenkov/White will be the shutdown defensive pairing late in games and on the power player.   That said, supporting a younger player with a veteran player should result in Urbom and Mark Fraser playing more difficult opposition than compared to rookies from last year. It will be interesting to see how the even strength minutes are distributed and who each younger player ends up paired up with as a game progresses.   If Bryce Salvador does play for the Devils after his LTIR stint (made official yesterday) you would guess that Urbom is the odd man odd, but the first month of the regular season should dictate if he is ready for NHL play.  It could also result in a quick recall of Matt Corrente if Urbom is not ready for the NHL (think Cory Murphy last year).

If Josefson is recalled during the year his impact will be dictated in part by who he plays with.  If he is centering Rod Pelley and Adam Mair he won't play against a high level of competition and be a 4th line energy player.  Should he make the jump to the 3rd line and play with David Clarkson and Brian Rolston he will be playing important minutes and at times he would be opposing some top lines (especially on the road).

Finally, In case you were curious, I have listed the last three drafts with the players I looked at from the 2009-2010 NHL season to see how many players came from each draft class and  in which  round they were selected.  Table generated using HockeyDB.com. 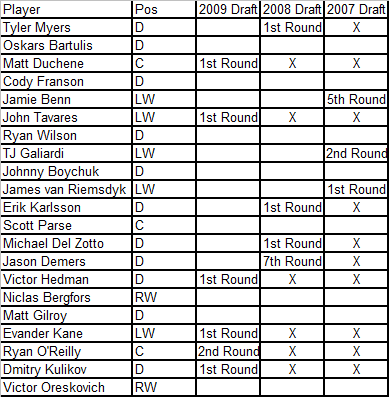 So now it's your turn.  What types of expectations do you have for the younger players?   Sound off below!

Can the younger players have a positive impact for the Devils this season? I do think so, with the caveat that they are placed in positions where they can be successful. However, I wouldn't expect them to have seasons similar to Tyler Myers or Matt Duchene. I think production levels similar to Del Zotto and Gilroy on defense and O'Reilly at center would be practical expectations.