Share All sharing options for: The Offensive Zone Finish Percentages of the New Jersey Devils So Far This Season

On Monday, I've counted up the raw shot differential, Fenwick, and Corsi numbers for the New Jersey Devils in this early season.  In Lou We Trust user triumph44 had this interesting comment:

third: these numbers don’t offer too much insight without zone starts, which have been wildly tilted in favor of NJ through the first few games. sestito has an 83% zone start, for instance. kovalchuk’s is 60.8%, which makes his corsi even more awful. it was one death shift that caused its terribleness, but it still wouldn’t be good.

Behind the Net fortunately stores Zone Start information at even strength, as well as zone finishes.  They are what they sound like.  Zone starts count when the player is on the ice for an offensive, defensive, or neutral zone start. Zone finishes count where the play starts; again, in the offensive, defensive, or neutral zone.   The difference between defensive and offensive zone starts can be used in adjusting Corsi, something I've done before for the Devils on this site.

Note: For some reason, Behind the Net indicated the page is updated but at the time of collecting data and this post, it lists only 5 games at most for the Devils.  Strange. 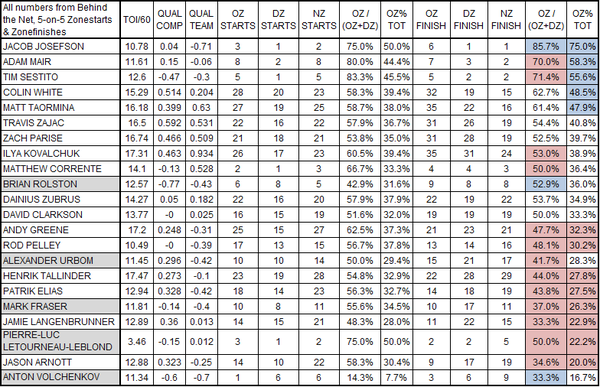 Player names highlighted in gray are Devils who aren't on the current active roster for one reason or another. The cells highlighted in blue reflect an increase of 5% or greater. Interestingly, those players haven't played a lot in New Jersey this season: Jacob Josefson, Brian Rolston, and Anton Volchenkov.   Cells highlighted in red reflect a decrease of 5% or more, and that group is much larger.  Most of that group had a big decrease regardless of percentage calculation, though there are exceptions (Adam Mair and Tim Sestito notably look good in one calculation but not the other).

Based on Behind the Net's OPCT (the OZ / (OZ+DZ) stats), only Colin White and Matt Taormina have had a higher percentage of offensive zone finishes than zone starts that didn't have a difference greater than 5%.   That makes a total of 5 players who've finished in more advantageous positions more often than where they started; and two of them are injured.

Travis Zajac, Zach Parise, Dainius Zubrus, and David Clarkson all had lower zone finish OPCT than zone starts, but with a difference less than 5%.    Still, they join most the vast majority of the team that saw a decrease going from zone starts to zone finishes at even strength.   This isn't really laudable at all.  It's great that the Devils have had a great proportion of offensive zone starts; but what good if it if players find themselves ending away from the offensive zone in proportion?  Most of these Devils have a positive quality of competition, so that's at least a mitigating factor.

By including neutral zone starts and finishes in the percentages, the OZ% TOT, more Devils saw an increase in offensive zone finishes from zone starts.  11 to be precise, including Parise, Zajac, Mair, Sestito, Matthew Corrente, and David Clarkson.  The Devils certainly do look better by this measure when including neutral zone stats and finishes. Of course, White and Taormina look the best among defensemen with increases of 9% and 9.9% respectively.

Most of those who had big decreases by OPCT remain with decreases by this percentage. Ilya Kovalchuk did come the closest to becoming positive with a -0.5% difference, the now-Albany-bound Alexander Urbom saw a decrease of 1.1%; but everyone else was 3% (Zubrus) or worse (everything else). The most interesting finding in my opinion is that there's an entire forward line that saw a decrease in both percentages: the now-former Patrik Elias, Jason Arnott, and Jamie Langenbrunner line.  From Monday's post, Arnott and Langenbrunner had bad Corsi and Fenwick numbers whereas Elias had good numbers.  However, the difference in offensive zone start and zone finish percentages seems to me to be another reason why the line should be broken up.

Overall, though, I can't help but think that while the Devils have done well to get a lot of offensive zone starts, they aren't finishing in the offensive zone nearly as much.  If the Devils can improve on this or at least reduce the severity of the differential, they should be more dominant during the run of play.

Truth be told, I could be over-rating the importance of zone finishes; and I'm sure there are other ways to analyze these figures.  Nonetheless, it's certainly another way of looking at how the team performs at even strength where we can learn more about the team's performance.  What did you think of these numbers? What would you like to see going forward for this team?  Please let me know what you think in the comments. Thanks for reading.