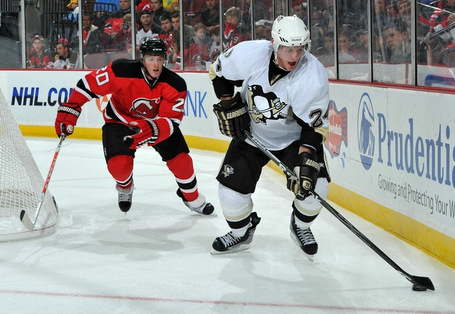 Yeah, yeah we all know the season hasn't started off the way we hoped. Parise is in a slump, Clarkson may as well not be playing, Volechnkov is injured, Arnott's and Langenbrunner's +/- are in the toilet, and the ZIP line has been zapped. Enough posts about what's gone wrong. It's 6 games, and we're about to head into our first road trip. I've seen this team struggle before and then pull it together when placed on a long road trip which has historically helped bond teams and formulate chemistry. 20 guys on the road hitting up enemy territory, all you have are your teammates. So I'll worry about "these devils" if and when they return from the next 8 games and are still at the bottom of the Atlantic.

But that's not what this post is about. It's about talking about one of the early bright spots on this season that is seemingly getting overlooked... Mr. Matt Taormina.

I'm not going to go into advanced stats and CORSIs because that's what John does. I'm going by what I've seen so far in person from Taormina's play. At the start of the season this team desperately needed another offensive D-man, and well they got him in spades! Yes there have been a few defensive lapses but lets focus on what he has been doing incredibly well.

Taormina is great skater and he's willing to lead the rush. He has good vision and makes good decisions for a kid who just entered the NHL. He can pass and best of all he shoots, man does he shoot! Just check out his CORSI for shot differential! ;) I haven't seen a Devils D-man in quite some time fire from the top of the blue-line at even strength with the sort of poise Taormina has shown in just 6 games. He's also not shy about taking a chance and he's good at getting it on net. And as good as all of that is ,he does one other thing extremely well that I feel may get overlooked (and killed us last season), which is he is very good at stopping the puck before it crosses the blue line when the opposing defenders try to get it out, and putting it back into play.

One of the positives I noticed in that horrible Boston loss is that when Taormina was on the ice at even strength, his play on the offensive rush particularly by the blue line allowed the devils to swarm Boston for a few rushes that felt like they were Power Plays.

I know it may be a bit premature to say, but I have liked..nay LOVED what I've seen from him and i think he'll not only be with the club for the whole year, but he is that puck-moving, offensive D-man we have all craved for quite some time. By the end of the season he is going to really grow into one hell of a PP quarterback, you watch.